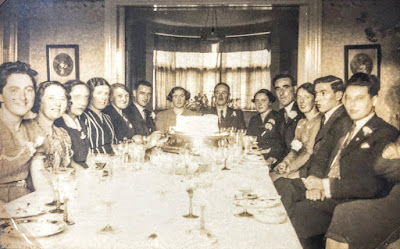 I have an old family photograph album that was once in my grandmother’s home at Ashdale Park, Terenure. It is an interesting and intriguing collection of photographs that appear to be mainly from the 1940s and 1950s.

There are photographs of small children, visiting cousins, graduations, family holidays in France and Italy, weddings, and an array of events one might expect in the any middle class family in south Dublin in the mid-20th century.

Additional interest is created by the framed images people had on the walls in their homes at this time. I understand that at one time there may have been a number of family portraits by the miniaturist John Comerford (1770-1832) in the house, but the one image that keeps turning up in these photographs is one I used to think was of ‘Mrs Fitzherbert’ – the secret wife of King George IV.

I thought little of the image, apart from the amusing – but very distant – link between Maria Fitzherbert and the Comberford family. But then, last year, a miniature portrait of Mrs Fitzherbert was among the 1,100 lots for auction at Matthews Auction Rooms in Kells, Co Meath, on the weekend of 21 and 22 March 2020.

That miniature portrait and the larger image in my grandmother’s house did not compare, and, apart from a blog posting, I thought little of it afterwards. 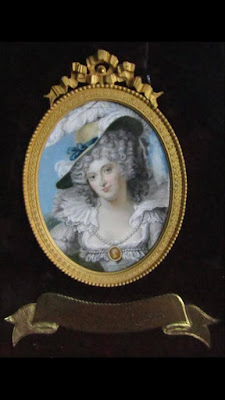 However, a comment a few days ago on another blog posting has left me asking this week: why would my grandmother have a framed print of a portrait of another royal mistress or courtesan in her house.

Portraits of ‘Mrs Fitzherbert’ and ‘Mrs Jordan’ seem to have been popular decorative items in many family homes. It is interesting how they show up, albeit dimly, in photographs taken in the house in Ashdale Park of my uncle Robert Comerford and of the wedding of my aunt Mary (May) Josephine Comerford (1902-1973) and John Leonard (Seán Ó Lionnáin) (1876-1959) of Orwell Road, Rathgar, on 11 October 1939.

My grandmother, Bridget (Lynders) Comerford (1875-1948) lived in the house in Terenure until she died in 1948. After Aunt May was widowed in 1959, she returned from Co Cork to live in that house until she died in 1973. As children, we regularly visited the house, but now I am wondering how my grandmother ever came to display portraits of both Mrs Fitzherbert and ‘Mrs Jordan.’ Were they merely fashionable decorations at the time? Or was there a family reason?

There is another branch of the Comerford family in England that once believed that one of their ancestors, Anne (or Sarah) Suffolk, who married James Comerford (1787-1833) of Holborn in 1805 and died in 1812, was the daughter of an illegitimate child of George III –George III had no illegitimate children, although his sons, including George IV and William IV, provided him with at least 56 illegitimate grandchildren.

My contact in Australia earlier this week drew my attention to one tenuous but entertaining link between ‘Mrs Jordan’ and another branch of the Comerford family. 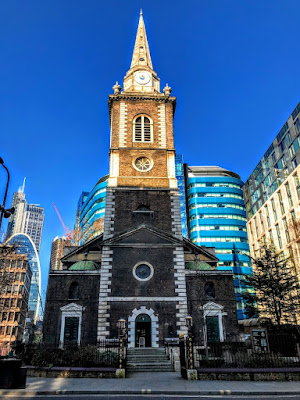 Although Francis Bland never married Grace Phillips, but they were the parents of six children, born between 1758 and 1767, and Dorothea was the third of these children. When Dorothea was 13, her father Francis abandoned this family and married Catherine Mahony (1755-1822), a 19-year-old Irish actress, at Saint Botolph’s without Aldgate, London, on 17 May 1774. Francis continued to support the family he had with Grace, sending meagre sums of money, but insisting his children would not use the Bland family name.

Dorothea then adopted her mother’s family name, Phillips, and first went on stage in Dublin in 1777 as Phoebe in As You Like It, probably with the Smock Alley Theatre. She fled to England in 1782, and started to call herself ‘Mrs Jordan’ – a reference to her escape across the Irish Sea, likened to the River Jordan.

Her reputation as one of the great actresses of her day came with Richard Brinsley Sheridan’s company at Drury Lane in 1785, and she was known for roles such as Rosalind in As You Like It and Viola in Twelfth Night.

Her life off-stage was even more colourful. After a number of unhappy affairs in England, she then had an affair with William, Duke of Clarence, later King William IV. That affair lasted more than 20 years, from 1790 until 1811, and they were the parents of 10 children. When the affair ended, she moved to France, and she died alone and in poverty at Saint-Cloud, near Paris, on 5 July 1816.

Dorothea’s children with William IV took the family name of FitzClarence, and their descendants held the title of Earl of Munster until the seventh earl, Anthony FitzClarence, a former journalist with the Daily Mirror and the Sun, died in 2000. 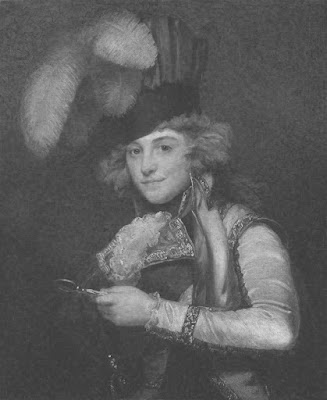 A portrait of ‘Mrs Jordan’ … George and James Comerford were first cousins of her half-brother and half-sister, James and Frances Bland

As for Dorothea’s first lover, Francis Bland, and his wife Catherine O’Mahony, the actress from Killarney, they were the parents of two children, a son, Colonel James Francis Bland and a daughter Frances Jane. When Francis Bland died at Dover in 1778, his family in Co Kerry made guardianship arrangements for his children; Catherine later returned to Ireland, and she died in Killarney in 1822.

When Colonel James Bland died in Killarney in 1831, he left his estate to his sister, Frances, wife of the Revd Robert Hewson (1780-1840), and their four children. The Revd Robert Hewson was Vicar of Kilcolman and Kildrum, and curate of Killarney; his father, the Revd Francis Hewson, was the Rector of Kilgobbin and had once been the Sovereign or mayor of Dingle. Robert Hewson died in 1840, and his widow Frances (née Bland) died in Ennismore House in January 1854.

The Mahonys of Dunloe Castle, near Killarney, were a well-known landed family in Co Kerry, and were related to the Comerford family too. Daniel Mahony of Dunloe Castle was a widower when he married his second wife, Maria MacCarthy of Springhouse, Co Tipperary, ca 1714 and they were the parents of four children, including John Mahony (ca 1715-1780), who succeeded to Dunloe Castle, and James Mahony (ca 1716-1794) of The Point, Killarney.

James Mahony married Jane Hennessy of Ballymacmoy, Co Cork. The Hennessy family was famous for giving its name to a celebrated Cognac, and was intermarried with the Cork branch of the Comerford family that had originally come from Co Wexford. James and Jane Mahony were the parents of six children, including two daughters, Catherine (1755-1822), who married Francis Bland, and Anna (born ca 1758), who married Lieutenant John Comerford.

John and Anna Comerford were the parents of two sons, George Comerford of the Kerry Militia and later the 57th Regiment, who died unmarried, and Lieutenant James Comerford.

John Mahony, the ancestor of my correspondent in Australia, and his younger brother Lieutenant James Mahony were both in the Kerry Militia with their brother-in-law John Comerford. All three are said to have fought in the British army during the 1798 Rising, and James Mahony was captured by General Humbert’s forces in Co Mayo. Later, John Comerford fought in the British army during the American War of 1812, as did his brother-in-law, Lieutenant James Mahony of the 77th Regiment.

James Mahony leased ‘The Point’ in Lackabane from the Browne family, Earls of Kenmare, he acquired further leases in the area, and bought out the tenants. The Point and other properties were sold on to the Revd James Bland in 1784 to provide for the children of James Mahony’s daughter, Catherine Bland, James and Frances Bland. James Mahony died in 1794.

The Point in Lackabane is now part of Killarney Golf Course, while Dunloe Castle is part of a well-known hotel.

Whether they did or not, it hardly explains why portraits of Mrs Jordan and Mrs Fitzherbert were hanging in a Comerford family home in Dublin in the 1930s or 1940s, over a century after they died in 1816 and 1837. 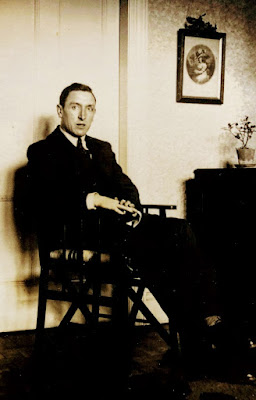 Robert Anthony (‘Bob’) Comerford (1909-1953) … with a portrait of ‘Mrs Jordan’ on the wall in Ashdale Park (Photograph: Comerford family collection)