The barracks in Ahane:
built for a colonial governor
who later said ‘no thanks’ 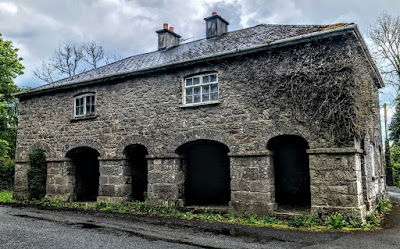 On the way to the Clare Glens on the borders of Co Limerick and Co Tipperary, I stopped briefly in the small east Co Limerick of Ahane to see both the former barracks and the interesting parish church.

The former barracks fronts onto the road directly, and at first sight it looked like an abandoned former market house. It is a challenging sight, because I wondered why such a small village could have once needed a market house.

Instead, this former barracks, built in the early 19th century, has been a barracks, a dispensary, a Famine soup kitchen, a school, political meeting tooms, and, more recently, apartments.

The barracks was first built in 1825 to protect Sir Richard Bourke (1777-1855) from ‘the so-called Republican elements of Irish society,’ according to the Ordnance Survey Field Name Book. However, Bourke is reported to have expressed ‘no need for protection from his own people.’

General Sir Richard Bourke was born in Dublin and was a cousin of Edmund Burke. A year after the barracks was built, Bourke became acting Governor of the Cape Colony (1826-1828) before becoming Governor of New South Wales (1831-1837).

As a lifelong Whig, he encouraged the emancipation of convicts and helped to put an end to penal transportation to Australia. He also gave Melbourne its name in 1837, in honour of the Prime Minister, Lord Melbourne.

Bourke returned to live at Thornfield House, Ahane, on the other side of the road from the barracks. He died while he was at church on Sunday 12 August 1855. He is buried in All Saints’ Church, Stradbally, near Castleconnell, Co Limerick, where his burial vault was designed by the Limerick-based architect James Pain (1779-1877).

When Bourkee returned to Ahane, the barracks became ‘a dispensary connected with that of Castleconnell’ in 1837. Within a decade, it housed as a soup kitchen at the height of the Great Famine (1845-1849). Later, in the 1880s, it was a woodcarving school producing fine examples of work, including the staircase at Glenstal Castle, now Glenstal Abbey.

Although the barracks has had a number of additions over the years, the main building is now vacant and has an abandoned look about it. 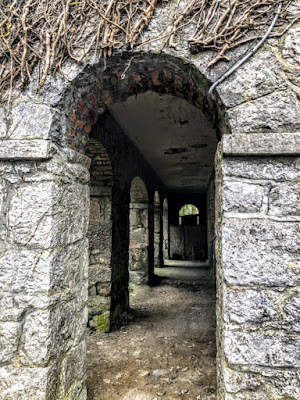 The arcade makes the former barracks in Ahane look like a market house (Photograph: Patrick Comerford, 2021)

It is built on a compact rectilinear plan form. The arcade makes the building look like a market house, and good quality workmanship can be seen in the deep grey limestone. The openings on each floor diminish in scale, producing a graduated, tiered visual effect.

This is a detached, two-bay or five-bay two-storey barrack, built on a rectangular plan, with single-bay, two-storey side elevations.

The rubble stone walls are part-covered in creepers and ivy, but originally they were rendered, with hammered limestone flush quoins at the corners.

The arcade is composed of a series of five elliptical-headed openings on tooled hammered or rough-hewn limestone piers. These have benchmark-inscribed tooled cut-limestone plinths with lichen-spotted tooled limestone ashlar voussoirs.

There is a square-headed central door opening in a camber-headed recess with lime-washed red brick voussoirs framing a timber boarded door.

The square-headed window openings in the camber-headed recesses on the first floor have shallow sills, and hammered limestone voussoirs frame the replacement timber casement windows.

Although this was only a barracks for about a decade, it is an important part of the early 19th-century architectural heritage of Co Limerick and its restoration would acknowledge the political and social history of Ahane and this small part of east Co Limerick. 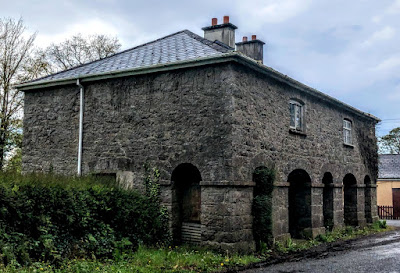 The restoration of the barracks would acknowledge the political and social history of Ahane (Photograph: Patrick Comerford, 2021)