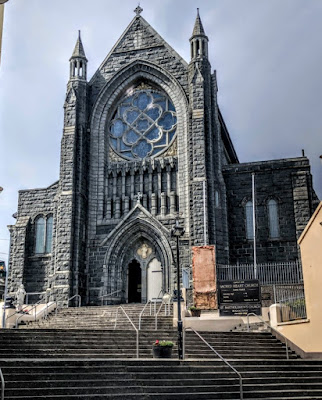 The Church of the Sacred Heart, the most striking building in Castletownbere, Co Cork, was designed by RM Butler (Photograph: Patrick Comerford, 2021)

During our visit to Castletownbere, Co Cork, on last month’s road trip or staycation in West Cork and Co Kerry, two of us visited the Church of the Sacred Heart, the Roman Catholic parish church, and Saint Peter’s Church, the former Church of Ireland parish church.

The Church of the Sacred Heart is the most striking building in the town. It was built in an imposing Gothic Revival style in 1907-1911 on the site of an earlier 19th century chapel. It stands on an elevated site set back from the Main Street and is approached by an imposing flights of steps, making it an important focal point in the town.

This imposing Gothic Revival church was designed by the Dublin-based architect Rudolf Maximilian Butler (1872-1943). The granite came from the Mountains of Mourne in Co Down and was brought by sea. Much of the funding was donated by British naval personnel based in Berehaven and by Irish emigrants in the US, and the foundation stone was laid on 22 August 1907.

The well-crafted stone workmanship, particularly the portal and rose windows, make an imposing façade. Inside, the church is a rich display of craftsmanship in stone, wood and stained glass. 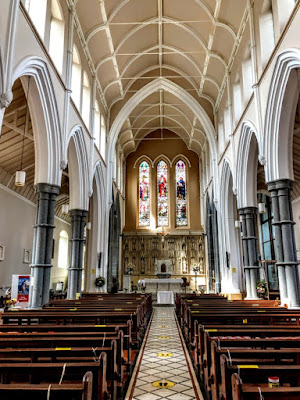 Inside the Church of the Sacred Heart … funded by British naval personnel in Berehaven and Irish emigrants in the US (Photograph: Patrick Comerford, 2021)

Rudolf Maximilian Butler was born in Dublin on 20 September 1872. His father, John Butler, was a barrister from Carlow; his mother, Augusta Brassart, was from Schleswig-Holstein. At the time his father died, Rudolf was 10 and was on a Christmas holiday with his mother in Germany. He finished his education in Germany, and returned to Dublin at the age of 16.

Butler stayed on as Doolin’s assistant from 1896 to 1899, when he became his junior partner. When Doolin died in 1902, Butler carried on the practice in partnership with James Louis Donnelly as Doolin Butler & Donnelly. 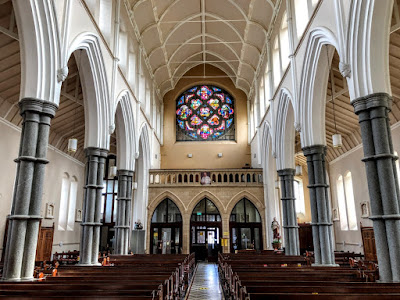 Inside the Church of the Sacred Heart facing the liturgical west (Photograph: Patrick Comerford, 2021)

As the architect and engineer to Rathdown Rural District Council, Butler designed 500 cottages in Co Dublin and Co Wicklow.

Butler was brought up a Moravian, but was largely engaged in Roman Catholic church work, first through his association with Doolin.

When Butler was 23, a chance encounter with an Irish Passionist, Father McMullen, on a train in France resulted in the commission to design part of the Passionist chapel in the Avenue Hoche, Paris. This probably led to his commissions for the Passionists in Ireland, including the church and monastery at Ardoyne, Belfast (1900-1902) and a new college in Enniskillen (1917). 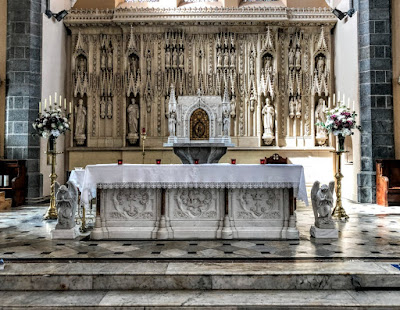 The altar and carved reredos in the Church of the Sacred Heart (Photograph: Patrick Comerford, 2021)

Butler won first prize in the competition in 1912 for designing University College Dublin. He was appointed examiner in architecture of the National University of Ireland in 1923 and became the first Professor of Architecture at UCD in 1924. When the RIBA conference took place in Dublin in 1931, he received the honorary degree of Master of Architecture from the NUI.

He was involved in establishing the Georgian Society, and in 1899 he became the editor and, for a few months, co-proprietor, of the Irish Builder. The magazine was sold in 1900, but Butler remained editor until 1935. 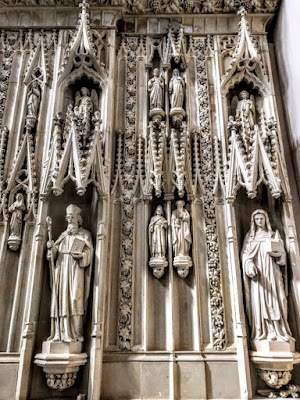 Butler retired as Professor of Architecture at UCD in 1942 and died on 3 February 1943.

Butler and his Annie Gibbons from Co Mayo were the parents of a son and three daughters. His son John Geoffrey Butler and his daughter Eleanor Grace Butler carried on his practice after his death. 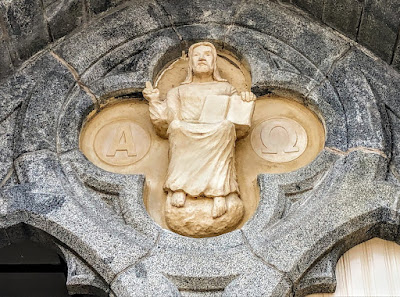 Christ the Alpha and the Omega … a carving above the main door (Photograph: Patrick Comerford, 2021)

I knew his daughter, Eleanor Butler (1914-1997), also known as Lady Wicklow, through her role in the Glencree Centre for Reconciliation. She was a Labour member of Dublin Corporation and was a Labour candidate for the Dáil in 1948. She was a Senator from 1948 to 1951.

Throughout her life, she maintained strong links with the trade union movement and her friendship with Denis Larkin.

Through her friendship with the poet John Betjeman she met her future husband, William Howard (1902-1978), then known as Lord Clonmore or Billy Clonmore. He had been a priest in the Church of England and was an active Anglo-Catholic slum priest in the East End of London, working with the Magdalen Mission. When he became a Roman Catholic in 1932, he was disinherited by his father. He succeeded his father as eighth Earl of Wicklow in 1946, and the couple married in Glasthule on 2 September 1959. 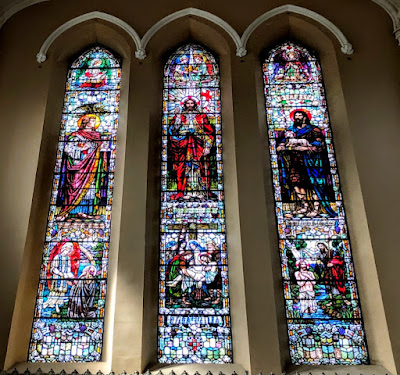 Butler’s church in Castletownbere has an interesting collection of stained-glass windows from the studios of An Túr Gloine, including the chancel window (1909) by AE Childe, and windows by Catherine O’Brien and Ethel Rhind.

The stained-glass chancel window is by Alfred Ernest Child (1875-1939) of An Túr Gloine. The main image depicts the Risen Christ, with Christ’s deposition from the Cross below.

The panels to the left depict Saint John the Evangelist, holding a pen and the poisoned chalice, and below Saint John’s vision or revelation in the cave on Patmos. 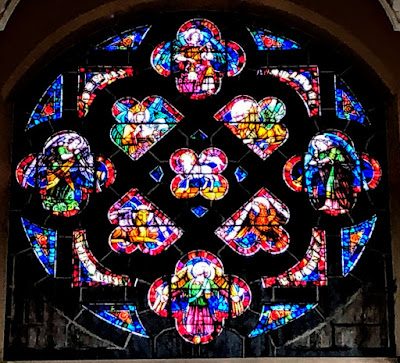 The Rose Window depicting the Adoration of the Lamb on the Throne (1910) by Catherine O’Brien of An Túr Gloine (Photograph: Patrick Comerford, 2021)

The Rose Window at the liturgical west end of the church, above the gallery and porch, depicts the Adoration of the Lamb on the Throne (1910). 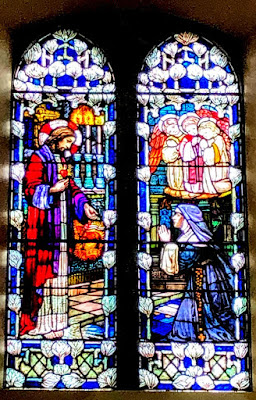 As for Saint Peter’s Church, the former Church of Ireland parish church in Castletownbere, that’s a story for another day.