The Castletownbere church
linked with miners’ strikes
and the Gaelic revival 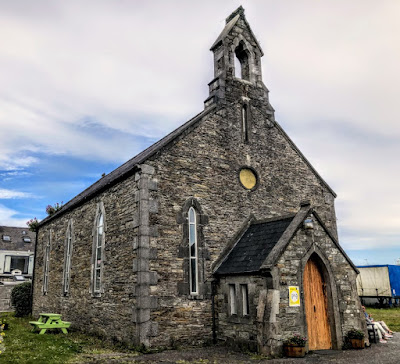 During our visit to Castletownbere, Co Cork, on last month’s road trip or ‘staycation’ in West Cork and Co Kerry, two of us visited the Church of the Sacred Heart, the Roman Catholic parish church, and Saint Peter's Church, the former Church of Ireland parish church.

Saint Peter’s Church was built in 1841 to replace Killaconenagh Church, which was 2 km outside the town.

Killaconenagh Church had been built in 1812 on the site of an earlier, medieval parish church The early 19th century church was described by Samuel Lewis in his Topographical Dictionary 1837 as ‘a small neat edifice, with a low square tower, towards the erection of which the late Board of First Fruits granted a loan of £500.’

However, it was abandoned within three decades of being built and shortly after Lewis provided his description when Saint Peter’s Church was built in 1841. The new church, on a more convenient site in the centre of the new town, was consecrated in July or August 1841, and was enlarged later and substantially rebuilt ca 1860.

The 1860s Gothic Revival style church incorporates earlier fabric. This was a fine church, exhibiting the high-quality craftsmanship that marks many parish churches in the Church of Ireland built in the 19th century. The coherent Gothic Revival style decorative scheme includes finely carved limestone finials, a bellcote and the window surrounds.

Although we did not get inside the former church during our visit, I understand the timber detailing exhibits sophisticated and highly skilled carpentry.

The features I could appreciate on an all-too-brief afternoon visit include the gabled entrance porch, gabled chancel and a gabled vestry extension, a cut limestone bellcote, pointed arch windows and doors, and carved limestone finials. 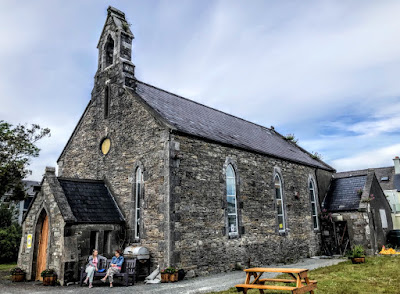 In a recent paper, Dr Miriam Moffitt told the hidden story behind the dismissal of the curate in the parish of Berehaven over 150 years ago.

Two printed addresses offering support for the Revd George Frederick Stoney (1826-1869) were published within the space of 18 months in the Church of Ireland Gazette when he left the parish in March 1868, and a third followed his death in September 1869.

Two addresses presented to George Stoney were published in the Irish Ecclesiastical Gazette (as it was then known) on 23 April 1868, one from a local Roman Catholic curate, while the third address was published on 22 September 1869 from ‘The Loyal Orangemen of Shercock.’

George Stoney was dismissed as the curate in Berehaven in March 1868 and returned to ministry in his former parish in Ballyjamesduff, Co Cavan, until his death 17 months later.

While he was in Beara, Stoney ministered at the chapel-of-ease at Allihies, where the population was mainly mining families from the nearby copper mines. Saint Peter’s Parish Church was in the town of Berehaven, now Castletownbere; Berehaven Miners’ Church, also known as Kilnamanagh Church, was about 18 km further west.

The copper mines at Allihies were owned by Berehaven’s leading landowner, Henry Edmund Lavallin Puxley of Dunboy Castle. The mines, in operation from 1812, attracted an influx of Cornish miners. After a miners’ strike in 1864, changes introduced by a new manager and a sharp fall in the price of copper led to drastic cuts in the workforce.

Although there was an attempt to replace some Irish workers with English workers, most of the miners were Roman Catholics from Beara. There were frequent allegations that better positions were awarded to English workers and that the Irish miners were exploited and living in squalid conditions. In a letter published in the Cork Examiner on 4 March 1868, Stoney detailed the ‘real agonising poverty of the people.’

In a letter in The Nation on 16 May 1868, Stoney was even more direct in his criticism of the mine-owner and his description of the miners’ living conditions. The Rector of Berehaven, the Revd John Halahan (1823-1920), was also Puxley’s father-in-law, and George Stoney was dismissed. Stoney’s entry in the preachers’ book reveals that he was prevented from delivering a farewell sermon.

Halahan had been the curate of Berehaven in 1846-1862, and then Rector in 1862-1918 and was also Dean of Saint Fachtna’s Cathedral, Rosscarbery (1905-1918), a total of 72 years in ministry in Berehaven. He is said to have been the inspiration for the character of Daphne du Maurier’s Hungry Hill. He died in Bantry on 28 September 1920, and was buried in Saint Finian’s Old Burial Ground, North Road, Castletownbere.

Halahan’s predecessor as Rector of Berehaven, the Revd Thomas O’Grady, was a scholarly priest and the father of Standish James O’Grady (1846-1928), author, journalist and historian. O’Grady played a formative role in the Celtic Revival, publishing the tales of Irish mythology, as the History of Ireland: Heroic Period (1878), comparing the Gaelic tradition with the tales of Homeric Greece.

He also worked as a journalist for the Daily Express of Dublin, contributed to James Larkin’s The Irish Worker, and was the editor of the Kilkenny Moderator. In Kilkenny, he was involved with Ellen Odette Cuffe (1857-1933), Countess of Desart, and her brother-in-law, Captain Otway Frederick Seymour Cuffe (1853-1912), a former Mayor of Kilkenny, in the revival of local woollen and woodworking industries.

Standish O’Grady was a paradox for his times, proud of his Gaelic heritage, a champion of aristocratic virtues and an advocate of a revitalised Irish people taking over the British Empire and renaming it the Anglo-Irish Empire.

Lady Gregory, WB Yeats and George William Russell, all associated with the Abbey Theatre, attributed their interest in the Fenian Cycle of Gaelic tradition in part to O’Grady, and this led to him being known as the ‘Father of the Celtic Revival.’

Standish O’Grady’s childhood home, the Glebe, is about 2 km west of Castletownbere near a famine mass grave. His eldest son and biographer, Hugh Art O’Grady, was the editor of the Cork Free Press and later a professor in the Transvaal University College, Pretoria, later the University of Pretoria.

There was a full-time Church of Ireland priest in Castletownbere until shortly after World War II. Saint Peter’s Church is now owned by a local community development association. The Southern Star reported in 2018 that the church had been bought after five years of negotiations.

Saint Peter’s is a listed building, and the churchyard is the only green space in the town, providing a safe place for children to play. 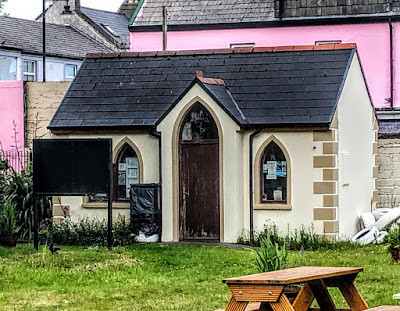 The churchyard is the only green space in the town, providing a safe place for children to play (Photograph: Patrick Comerford, 2021)