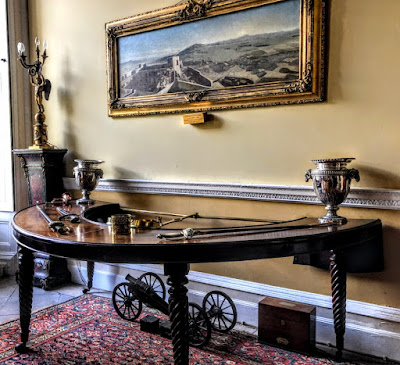 Mementoes of Lord Keane and his exploits in Afghanistan (Photograph: Patrick Comerford)

Afghanistan is known to many military and diplomatic figures as the ‘Graveyard of Empires.’ Modern Afghanistan dates from 1747, when Ahmad Shah Durrani captured territory from Nader Shah’s descendants in Persia, the Mughals, and the Uzbeks to his north.

This week’s tragic events in Afghanistan, following the fall of Kabul, remind me of an unusual link between previous conflicts in Afghanistan and Cappoquin, in Co Waterford.

I paid a short visit to Cappoquin earlier this week after my summer ‘road trip’ visit to Youghal, Co Cork. But during a visit to Cappoquin House last August, Sir Charles Keane, recalled many of the stories of General Sir John Keane (1781-1844), who eventually become Baron Keane of Ghuznee and Cappoquin because of his role in the capture of Ghuznee (Ghazni) during the First Anglo-Afghan War in 1839.

Sir Charles showed me many family mementoes of Lord Keane, including a portrait, a painting of Ghunzee Fort and a ceremonial sword.

John Keane was born in Belmont, Cappoquin, on 6 February 1781, the second son of Sir John Keane, 1st Baronet. He joined the army as an ensign at age 11 in 1792. He rose to the rank of lieutenant-colonel in the 60th Foot and commanded a brigade in the Peninsular War.

He was promoted major-general, and commanded the British 3rd Brigade at the Battle of New Orleans, where he was wounded twice. Later, he was commander-in-chief in the West Indies and administered the colonial government of Jamaica.

General Keane was Commander-in-Chief of the Bombay Army in 1834-1840, and commanded the combined British and Indian army (‘The Army of the Indus’) during the opening campaign of the First Anglo-Afghan War. 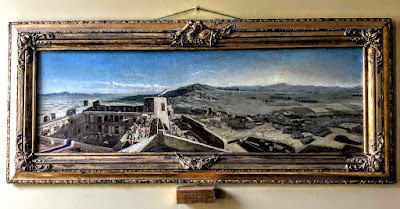 Keane and his forces seized Karachi in February 1839. He then commanded an expeditionary force that entered Afghanistan from India to forestall an expected, imminent Russian invasion, and commanded the victorious British and Indian army at the Battle of Ghazni on 23 July 1839.

Because of severe shortages of supplies and the lack of draft horses, Keane’s forces had to leave heavy siege equipment behind them in Kandahar. The army arrived at Ghazni on 21 July. Initial reconnaissance showed the city to be heavily fortified with a 70-ft wall and a flooded moat. The defence of the city was led by Hyder Khan, the son of Dost Muhammad.

Without siege equipment, the only way for the British and Indian force to capture Ghazni was through a frontal attack that would result in heavy casualties.

However, captured Afghan soldiers were interrogated by the British chief engineer, Colonel Thompson, and they revealed that all of the gates into Ghazni had been sealed with rocks and debris except the Kabul Gate, in the north.

Thompson spied on the gate and observed an Afghan courier entering the city, confirming what the prisoners had reported. Further inspection showed the gate was lightly guarded and inadequately defended.

The decision was made to attack the city through the Kabul gate, and the British went around the city and camped on the north side facing the Kabul gate. While the British forces encircled the city, Shuja Shah Durrani and the Indian forces set up camp a few miles from the city to prevent any Afghan forces trying to relieve it.

On 22 July, thousands of Ghilji tribesmen attacked Shuja Shah Durrani’s contingent but were repelled. Once the Afghan relief forces were driven away, Keane’s forces were ready to mount an attack to capture the city.

British artillery was positioned to give covering fire to the advancing troops, and four regiments were formed into a storming party commanded by Lieutenant Colonel Dennie. The rest of the three British regiments formed the main attacking column commanded by Brigadier Sale. High winds prevented the garrison from realising that they were about to be attacked.

At 3 a.m. on 23 July, Indian engineers moved towards the gate. As they approached, they were fired on by the Afghans inside the city. The British artillery bombarded the city and gave cover to the engineers as they reached the gate. Gunpowder was piled beside the door, the explosion destroyed the gate, and the four regiments under Colonel Dennie rushed through the shattered gate.

Bitter hand-to-hand fighting ensued in the darkness. The Afghan defenders launched a counterattack that cut off the storming party from the supporting columns. Sale’s forces fought their way through the gate to link up with Dennie’s encircled men, but Sale was severely wounded. The British then fought their way into the centre of the city and by dawn the city was captured.

The British forces suffered 200 men killed and wounded while the Afghans lost almost 500 men and 1,600 were taken prisoner.

Keane left a small garrison in Ghazni and began to march his forces towards Kabul on 30 July. When the Afghan ruler, Dost Muhammad, heard about the fall of Ghazni, he asked for terms of surrender. The British offer was exile in India, but he refused to accept this. He fled Kabul towards Western Afghanistan and the Afghan army surrendered. The British then installed Shuja Shah Durrani as the new ruler of Afghanistan.

Keane retired without being engaged in further fighting. He was honoured with the peerage title of Baron Keane, of Ghuznee and of Cappoquin, Co Waterford, on 23 December 1839, and received a pension of £2,000 a year for his and two successive lives.

Lord Keane died at Burton Lodge, Hampshire, on 24 August 1844. His title died out with the death of the third baron in 1901. His mementoes have returned to Cappoquin House. 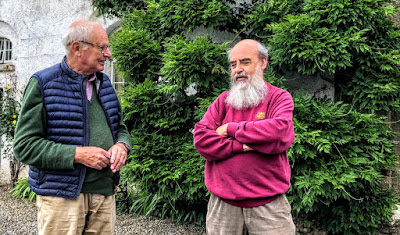