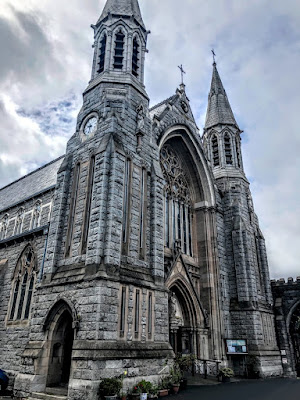 Many people arriving in Dublin from the south or south-west are familiar with the sight of the large Oblate church on Tyrconnell Road in Inchicore. But most probably pass it, and I visited the Church of Mary Immaculate for the first time earlier this month.

The height and scale of the church, its prominent location, and its large capacity are reflect the confidence of the Roman Catholic Church in Ireland at the turn of the 19th and 20th centuries.

The setting of the church is enhanced by the cast-iron railings and gateway, and a replica grotto of Lourdes behind the church once drew large numbers of visitors. The clock facing Tyrconnell Road adds to the social function of the building. 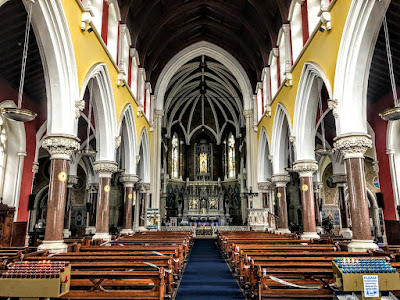 Before the Oblates arrived in Inchicore, the Sisters of Mercy founded a house and school in Goldenbridge in 1855. The Richmond Barracks, with 1,600 soldiers, was also a significant presence in the locality.

The railway company had built 148 cottages, housing 850 people, who became the core of the new parish. Many of railway workers were brought from foundries and railway works of England. Kilmainham became a civil township in 1867-1868, and it was only incorporated into the city in 1900.

The Oblate Fathers came to Dublin from France in 1856. In his search for a suitable location for the first Oblate foundation in Ireland, Father Robert Cooke was advised by the Augustinians of Saint John’s Lane, Dublin to go to the Kilmainham area. At the time, the area was within the parish of Saint James and included Goldenbridge, Inchicore and Kilmainham, but was outside the limits of the city of Dublin. 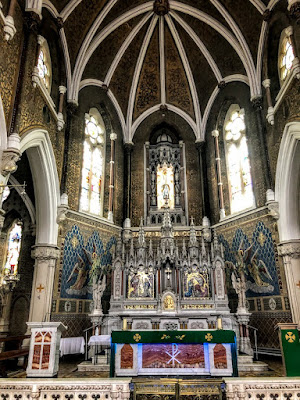 The High Altar and Sanctuary in the Church of Mary Immaculate, Inchicore (Photograph: Patrick Comerford, 2021)

Part of the motivation in establishing the Oblate presence in Inchicore may have been to challenge the presence of the new Model School, which opened in 1853 to opposition from Archbishop Paul Cullen of Dublin. The Oblates bought a 26-acre farm south of the Great Southern and Western Railway Works in Inchicore.

A new Oblate school opened in 1857, taking many children from the Model School, and offering evening classes for adults and young apprentices. In recent years, the Model School has also passed into the management of the parish priest of Inchicore.

An early timber church was built by the workers from the nearby Railway Works. The timber church was 70 ft long and 27 ft wide was completed by voluntary labour in four days. Generation of railway workers have since maintained a relationship with the Oblates. 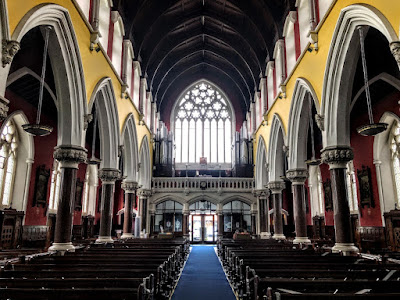 The new Church of Mary Immaculate was designed by AWN Pugin’s son-in-law, George Coppinger Ashlin (1837-1921). It is oriented on a south-west/north-east axis, instead of the liturgically traditional east-west axis.

The foundation stone was laid by Cardinal Paul Cullen, Archbishop of Dublin, on 9 July 1876. The nave and aisles were completed when the new church officially opened on 8 December 1878. Dr Francis Moran, Bishop of Ossory and later Cardinal Archbishop of Sydney, celebrated the High Mass and Bishop Patrick Dorrian of Down and Connor preached. The famous Dominican preacher Father Thomas Burke preached in the evening.

However, the work soon stopped because of a shortage of funds. Eventually, the foundation stone of the chancel was laid in May 1892 and, with the two side chapels, blessed by Archbishop William Walsh. The chancel was opened on 8 December 1899 and altars dedicated to the Sacred Heart and Saint Joseph were added in 1901. 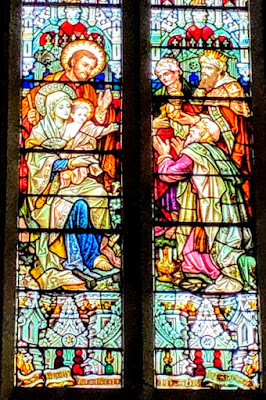 The Visitation of the Magi … a window in the hexagonal chancel (Photograph: Patrick Comerford, 2021)

Although the church was still incomplete, it was consecrated by Archbishop William Walsh of Dublin on 3 December 1903.

The bell towers, transepts, confessional recesses, and the boundary wall, dating from 1930, were designed by Ashlin and Coleman.

The highly decorative interior contains fine craft work in the stone carvings, mosaics and wood carvings. The high altar and communion rail are the work of the Birmingham sculptor, James Pearse, father of the 1916 leader Padraig Pearse. The mosaics of angels around the altar, on the sanctuary walls and floor and around the chapels are the work of the Ludwig Oppenheimer studios.

The church has a double-height, seven-bay nave, with lean-to side-aisles. The hexagonal chancel was built in 1899, the side chapels were added 1901, and the four-stage bell towers with conical spires and the two two-bay transepts and sacristy were built in 1930. At the same time, the sacristy was enlarged and electric lighting was installed along with a public address system. 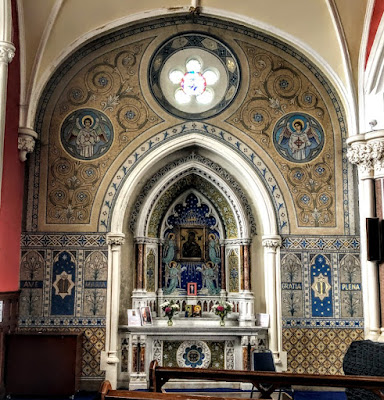 The mosaics in the two transepts were added in 1954 (Photograph: Patrick Comerford, 2021)

The mosaics in the two transepts were added in 1954. The church was refurbished and the roof rafters replaced in 1991-1992.

The walls are of rock-faced rusticated limestone, with stepped buttresses at the side aisles and a chamfered plinth course. A carved limestone string course forms a continuous sill course at the side-aisles. The towers have trefoil-headed lancet openings with carved surrounds and timber louvered vents. 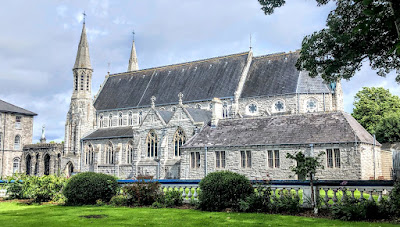 The church is oriented on a south-west/north-east axis, instead of the liturgically traditional east-west axis (Photograph: Patrick Comerford, 2021)

The gable-fronted porch has polished granite colonnettes supporting roll mouldings, there are twin timber battened doors, and a carved limestone statue in the tympanum supported on a trumeau.

Inside, the church has a double-height nave and chancel with having timber pointed arch coffered vaulting in the nave and a rib vaulted ceiling in the chancel.

There is a carved marble altar, reredos and communion rail in the chancel, and a marble pulpit near the chancel. 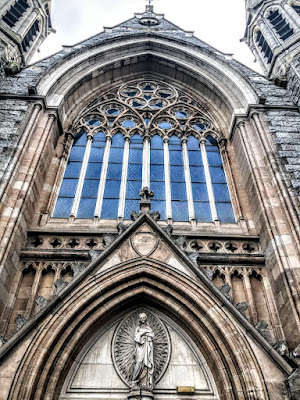 A carved limestone statue in the tympanum is supported on a trumeau (Photograph: Patrick Comerford, 2021)

Also worth noting are the plastered walls with corbelled colonnettes, the pointed arcades at the aisles and transepts, the circular-profile polished granite columns with carved foliated capitals, the gilt mosaics on the walls of the chancel and transepts, the stained-glass windows, the carved timber pews and confessional boxes, and the choir gallery with a pipe organ above the glazed arcaded internal entrance porch.

The mosaic floor in the porch bears the monogram ‘OMI’: Oblates of Mary Immaculate.

The site forms part of a group of related structures, including the adjacent House of Retreat and a school, and has considerable social importance in the community in Inchicore.

The Oblate House of Retreat was designed by John Bourke (Photograph: Patrick Comerford, 2021)

A replica of the grotto of Lourdes was built in reinforced concrete behind the church in 1928 and opened on 11 May 1930 with 100,000 people present. The pointed arcade joining the church and the Oblate House of Retreat was built in 1946 and includes a large bronze statue of Saint Peter.

The Oblate House of Retreat is a large and imposing building. The foundation stone of the house was laid in 1858, and it was completed in 1862 to the designs of John Bourke, reflecting the style of the Oblate scholasticate at Montolivet, Marseilles, built in 1852-1856.

The Oblate cemetery was moved to the present site in 1891. The bodies of Oblates buried at Cahermoyle, Co Limerick, and Piltown, Co Kilkenny, were moved there when those houses closed. 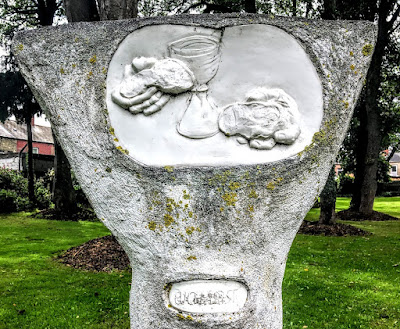 The 20 white porcelain ceramic panels on the Rosary Way are the work of Helena Brennan (Photograph: Patrick Comerford, 2021)

Behind the church, the Rosary Way was inspired by Father Ciaran Earley. The ceramicist Helena Brennan, in a project partially funded by a grant from Dublin City Council, produced 20 white porcelain ceramic panels in bas-relief, displayed on plinths, in 2001-2004.

At Irish independence in 1921, Richmond Barracks was vacated by the military and was used for housing, later known as Keogh Barracks, and replaced by Saint Michael’s Estate. The church became part of a separate parish in 1972.

Today, the Oblate community in Inchicore includes the provincial leadership team, the parish team, the MAMI team, the Mission Development Office, a small group of preachers, and a number of retired Oblates. It also houses the Provincial Archives and Oblate Missionary Record Office. 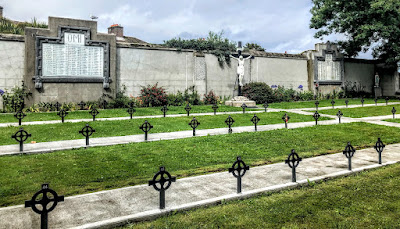 The Oblate cemetery was moved to the present site in 1891 (Photograph: Patrick Comerford, 2021)