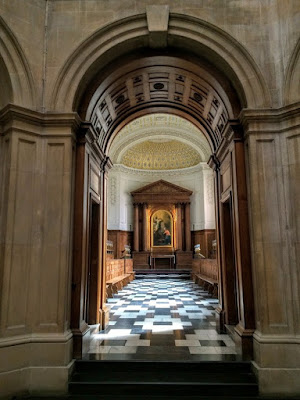 Inside the chapel in Clare College, Cambridge, with The Annunciation (1763) by Giovanni Battista Cipriani (Photograph: Patrick Comerford)

My theme this week is seven college chapels in Cambridge, and my photographs this morning (9 August 2021) are from Clare College. 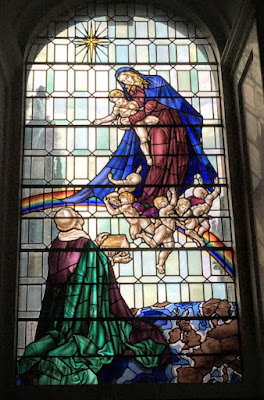 The window commemorating Richard de Badew, the original founder of the college, offering what was known then as University Hall to the Virgin Mary and Christ Child (Photograph: Patrick Comerford)

I stayed in Clare College, Cambridge, five years ago in advance of the annual summer school at Sidney Sussex College in 2016 organised by the Institute for Orthodox Christian Studies.

The Chapel in Clare College was built in the 1760s to a design by the amateur architect and Master of Gonville and Caius, James Burrough. The Chapel is at the heart of the college in Old Court, with a daily Eucharist each morning during Full Term, and Choral Evensong sung by the College Choir.

According to instructions left by the college founder, Lady Elizabeth de Clare, the chapel, as with the whole college, is dedicated to the Blessed Virgin Mary. The painting above the altar is ‘The Annunciation’ by Giambattista Cipriani, and was commissioned for the chapel by the Duke of Newcastle in the 18th century.

In the early 20th century, two stained glass windows were installed at the West End of the Chapel. The window on the south commemorates Richard de Badew, sometime Chancellor of Cambridge University and the original founder of the college, which was later re-established, renamed and endowed by Lady Elizabeth de Clare. He is shown offering his foundation, then known as University Hall, to the Virgin Mary and the Christ Child.

Below them is a map of Europe, with Ireland and Britain comfortably close to the European continental landmass, long before anyone thought of ‘Brexit.’ The window opposite on the north side of the chapel commemorates two of the college’s most distinguished alumni: Bishop Hugh Latimer, a martyr in the reign of Queen Mary Tudor; and Nicholas Ferrar, founder of the community at Little Gidding just before the English Civil War in the 17th century. To the left is a small image of the church built by Nicholas Ferrar and referred to by TS Eliot in his poem ‘Little Gidding.’

The antechapel has memorials to the members of Clare College who died in the two World Wars, including Hamo Sassoon, brother of the war poet Siegfried Sassoon. Past deans of Clare College include Archbishop Rowan Williams (1984-1986); the theologian and New Testament scholar, Bishop John AT Robinson (1951-1959); the New Testament scholar, CFD (‘Charlie’) Moule (1944-1951); Maurice Frank Wiles (1959-1967); and Bishop Mark Santer (1967-1972).

As I stood in the chapel of Clare College, I was reminded of TS Eliot’s reflections on Nicholas Ferrar and his community in ‘Little Gidding’: 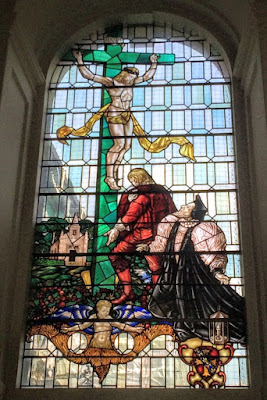 22 As they were gathering in Galilee, Jesus said to them, ‘The Son of Man is going to be betrayed into human hands, 23 and they will kill him, and on the third day he will be raised.’ And they were greatly distressed.

24 When they reached Capernaum, the collectors of the temple tax came to Peter and said, ‘Does your teacher not pay the temple tax?’ 25 He said, ‘Yes, he does.’ And when he came home, Jesus spoke of it first, asking, ‘What do you think, Simon? From whom do kings of the earth take toll or tribute? From their children or from others?’ 26 When Peter said, ‘From others’, Jesus said to him, ‘Then the children are free. 27 However, so that we do not give offence to them, go to the lake and cast a hook; take the first fish that comes up; and when you open its mouth, you will find a coin; take that and give it to them for you and me.’ 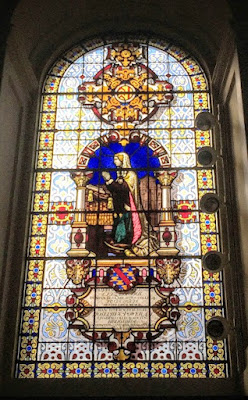 The Prayer in the USPG Prayer Diary today (9 August 2021, International Day of the World’s Indigenous Peoples), invites us to pray:

Today we pray for indigenous peoples across the world, as they fight to protect their ancestral lands from deforestation and extractive mining. 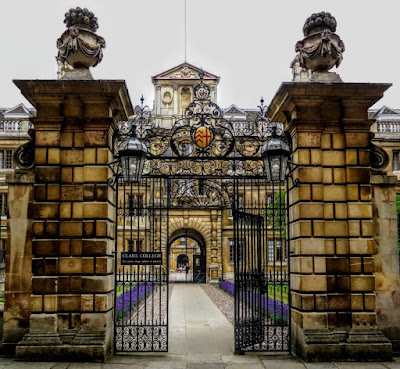 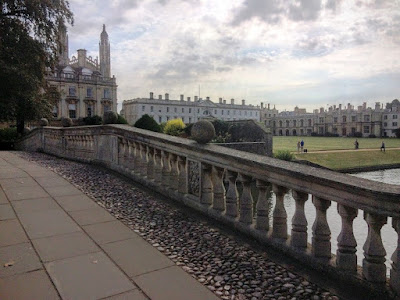