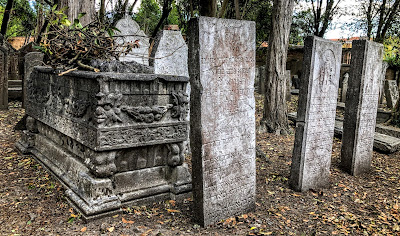 Burials in the old Jewish cemetery on the Lido date back to 1389 (Photograph: Patrick Comerford, 2021)

The Lido or Venice Lido is a long and narrow island, a thin strip of land, 11 km long and hardly 1 km wide, separating the Venetian lagoon from the Adriatic Sea. The Lido is home to about 20,400 people and the Venice Film Festival takes place at the Lido in August and September. It developed in the 19th century as a tourist resort, with many 19th century villas in the Liberty style – the Italian version of Art Nouveau – and many grand hotels.

I spent a morning on the Lido this week, walking along the beach, and visiting the Jewish cemetery on the Lido. This is one of the largest Jewish cemeteries in Europe, and it is an island jewel of medieval art.

The Republic of Venice granted the Jewish community a small plot of uncultivated land at San Nicolò of Lido to create a cemetery in 1386.

The land was also claimed by the friars of San Nicolò convent. But the dispute with the monks was resolved around 1389, and the oldest tombstone belongs to a certain Samuel, son of Samson and dates from 1389, the year the cemetery opened.

As the cemetery expanded gradually, it was enclosed by tall hedges for both aesthetic and protective reasons. It was used without any interruptions and expanded again in 1641. 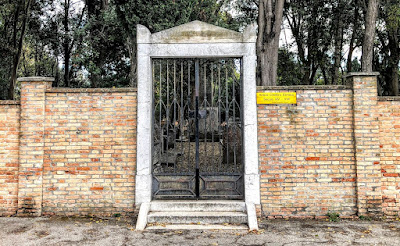 The walls of the old Jewish cemetery in San Nicolò (Photograph: Patrick Comerford, 2021)

The Jewish community in the Ghetto Nuovo included immigrants and refugees from a wide geographic area. When the Jews of Spain were expelled by the Inquisition in 1492, many Jewish families from the Iberian peninsula arrived in Venice. As a result, the cemetery has a variety of tombstone carvings, with inscriptions in Hebrew, Spanish and Portuguese, often revealing a family’s country of origin.

Among the graves are those of the poet Sarah Coppio, Sullam, the Rabbi Leone da Modena, and the intellectual Simon Luzzatto, all leading figures in the cultural life of the ghetto in the 16th and 17th centuries.

There are stone-carved coats of arms or family emblems, such as the jug and basin of the Levites or the blessing hands of Cohens, indicating genealogical provenance. The stylistic differences in the designs of gravestones reflect their dates.

Earlier markers tend to be less elaborate while later ones, like the sarcophagi favoured in the 18th century, are more ornate in their decoration. The rampant lions or crowned eagles of the Jesurum-Diaz family, for example, can still be seen. Other gravestones show more traditional motifs, such as the seven-branched menorah, the Lion of Judah, Jacob’s ladder, ram’s horns or palm trees. 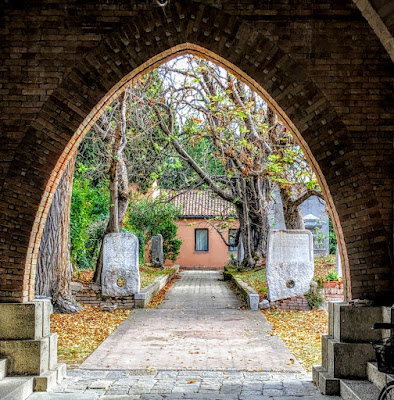 The monumental entrance to the new Jewish cemetery was completed in 1923 (Photograph: Patrick Comerford, 2021)

Venice later decided to strengthen the fortifications of the Lido as a defence against the Turks, and this led to a slow but constant reshaping of the cemetery spaces to the south, so that the ‘University of Jews’ was forced to buy a piece of land bordering the cemetery in 1736.

The new Jewish cemetery opened on Via de Cipro at the end of the 18th century.

Many graves and ruined monuments in the old cemetery were lost with the fall of the Venetian Republic, and with the foreign occupations and acts of vandalism that followed. Later in the 19th century, plans developed to make the Lido of Venice healthier and more attractive. Parts of the cemetery were expropriated for other uses.

Later attempts to restore the cemetery were abandoned with the introduction of fascist race laws in 1938. 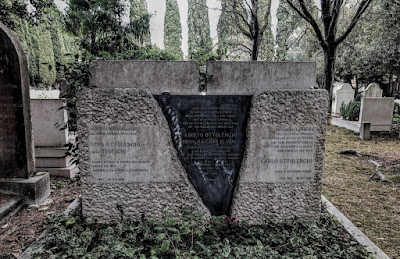 The graves in the new Jewish cemetery include the family of Adolfo Ottolenghi, Chief Rabbi of Venice, who was murdered in Auschwitz (Photograph: Patrick Comerford, 2021)

The graves in the new Jewish cemetery include the great and the good of Jewish life in Venice over the past two centuries, including the family of Adolfo Ottolenghi (1885-1944), Chief Rabbi of Venice (1919-1944), who was murdered in Auschwitz; Isacco Pesaro Maurogonato (1817-1892), former senator and Finance Minister); Michelangelo Jesurum (1843-1909), founder of lace manufacturing in Venice and Burano; the family of Napoleone Pardone, former Spanish Consul in Venice; and Professor Richard Newton Gardner (1927-2019), US Ambassador to Italy (1977-1981) and Spain (1993-1997).

In recent decades, the old Jewish cemetery has been restored to its dignity. Thanks to public and private collaboration, from Italy and abroad, major restoration work began in 1999.

About 1,200 tombstones have been saved and catalogued, most of them dating from the first half of the 16th century to the second half of the 18th. They tell the stories of the many different origins, cultures and languages of the Venetian Jews. Another 140 gravestones from the old cemetery are now at the new one: some are placed near the entrance, others in a nearby gallery room. 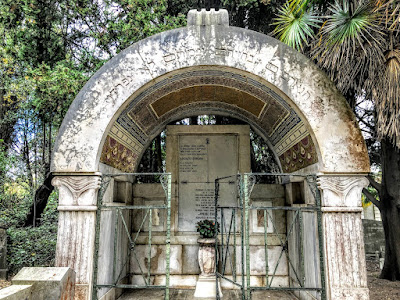