Dancing with Zorba
and Electra on a
return visit to Crete 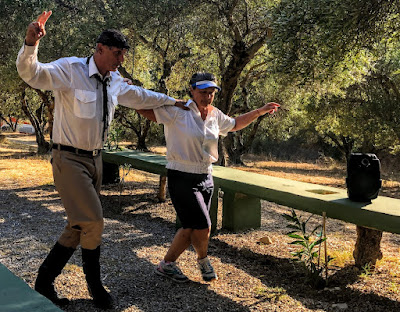 An improvised interpretation of syrtaki in an olive grove in Crete days after the death of Mikis Theodorakis (Photograph: Patrick Comerford, 2021)

After a two-year absence, I returned to Crete at the end of summer, glad that the lifting of pandemic restrictions allowed me to return to the Greek island I have visited almost every year since the mid-1980s.

Young men from Ireland and England first became acquainted with parts of present-day Italy and Greece in the 18th century, when the ‘Grand Tour’ became an essential part of the education of aristocrats and gentlemen.

They probably behaved no better than Leaving Cert students now behave in Malia and Hersonissos, but they also reached other parts of Crete. Perhaps the first modern tourist to visit Rethymnon was Richard Pococke (1704-1765). He was an 18th century Church of Ireland Bishop of Ossory (1756-1765) and briefly, before his death, he was Bishop of Meath (1765).

Pococke was ahead of his time: he was in Rethymnon almost a century before Robert Pashley visited Crete in 1834. A century after Pococke’s death, the English writer and artist Edward Lear visited Crete in 1864 and painted five watercolours of Rethymnon.

During my first week back in Crete, the island was immersed in three days of official mourning for the composer Mikis Theodorakis, who died in Athens but was buried in Chania.

Theodorakis is best-known outside Greece for his film scores, particularly for Zorba the Greek (1964) and the political masterpiece Z (1969). Zorba is based on a novel by the great Cretan author Nikos Kazantzakis, and is remembered for the syrtaki or ‘Zorba’s Dance’ performed by Anthony Quinn.

Anthony Quinn later claimed he had improvised or even invented syrtaki. But it was choreographed for the film by Girogos Provias. It is the staple Greek folkdance, and is a mixture of the slow and fast rhythms in Greek folkdance. On our way back to Rethymnon from the monastery and beaches at Preveli, we were treated to an improvised interpretation of syrtaki in an olive grove in the Kourtaliotiko Gorge. 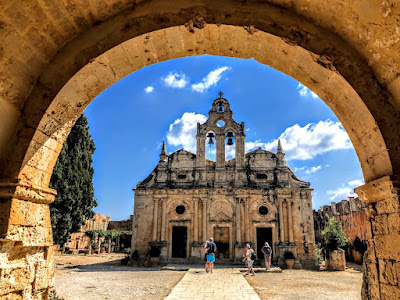 The Monastery of Arkadi is a national symbol of Greece (Photograph: Patrick Comerford, 2021)

Three monasteries
in the mountains

I have been visiting the Monastery of Arkadi, in the mountains above Rethymnon, since I first arrived in Crete in the mid-1980s. Arkadi is a national symbol, and before Greece joined the Eurozone the monastery featured on the 100 Drachma banknote.

The monastery dates back to the 16th century, if not earlier, and is associated with important cultural figures in the history of Crete, including Georgios Chortatzis, author of the great Cretan epic poem Erofili, written in Rethymnon in 1600.

Bishop Pococke, whose travels have been published in three volumes by Dr Rachel Finnegan, visited Arkadi Monastery in 1739, and wrote: ‘It is a charming structure built around an extensive courtyard. They have a very fine refectory and in the centre of the courtyard a very pretty church with a wonderful facade in the Venetian architectural style.’

But the place of pride held by Arkadi in Greece comes from the massacre of 943 people, mostly women and children, during the Cretan resistance to Ottoman rule. The Greek War of Independence began 200 years ago in 1821, but Crete was still part of the Ottoman Empire when the massacre took place 45 years later, on 8 November 1866. 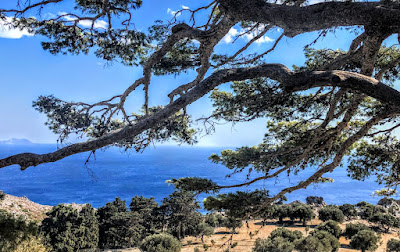 The Monastery of Preveli looks out onto the island of Gavdos, the southern-most point of Europe, and across the Libyan Sea (Photograph: Patrick Comerford, 2021)

The Monastery of Preveli, 37 km south of Rethymnon and on the south coast of Crete, stands above the famous ‘Palm Beach’ of Preveli and looks out onto the small island of Gavdos, the southern-most point of Europe, and across the Libyan Sea.

The earliest records for the monastery date back to 1594. In 1821, the Abbot of Preveli, Melchisedek Tsouderos, was a leading figure in the revolutionary events in Crete. Following the catastrophe at Arkadi, Turkish soldiers set fire to the monastery in 1867.

During the German occupation of Crete in World War II, 5,000 stranded Greek, Australian, New Zealand and British troops who fought in the Battle of Crete in 1941, found shelter in Preveli until the Abbot, Agathangelos Lagouvardos, organised their escape to Egypt on two submarines on the nights of 31 May and 1 June 1941 and 20 and 21 August 1941.

The best-known relic in Preveli is the large, richly decorated silver cross brought back from Constantinople by Abbot Ephrem. It is said to contain a relic of the true cross and is kept in a special shrine in the main church. I visited Preveli on the day after the Feast of the Holy Cross. One of the three monks in the monastery put on his stole, took the cross out of its shrine, and blessed me before I went on my way.

West of Preveli, the tiny monastic church dedicated to Saint Paisos of Mount Athos stands on a tall craggy rock above the beaches of Damnoni of Amoudaki. It looks out of place and might be more appropriate among the monasteries of Meteora, perched perilously on high, precipitous rocky peaks in northern Greece.

Saint Paisios (1924-1994), whose feast day is 12 July, is still known for his spiritual guidance and ascetic life and has been described as ‘the saint of the dispirited and of sinners.’ This tiny, almost inaccessible church probably goes unnoticed by tourists, but it was filled with tourists on his feast day this year after popular reports that miraculous myrrh was seen streaming from his icon. 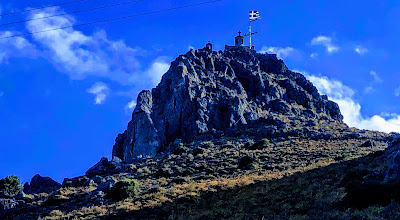 The Church of Saint Paisos might easily sit among the monasteries of Meteora (Photograph: Patrick Comerford, 2021)

Watching the sunset
on the seashore

On the day I visited Preveli Monastery and the Palm Beach below, I also visited the beaches at Plakias, Damnoni and Amoudaki for the first time.

But since 2015, I have been staying in Platanias, a working suburban village on the eastern fringes of Rethymnon that has also grown into a resort in the last decade or so. And one of the joys of staying in Platanias is being a mere a two or three-minute walk from Pavlos Beach.

Pavlos Beach is part of the long, sandy stretch of white beach that stretches for miles and miles east of Rethymnon, as far as the eye can see. When the summer season is at its highest, the beach can be filled with tourists on sunbeds. But, on days when you least expect it, the seas can be turbulent, the sunbeds are abandoned, and it becomes a new pleasure to watch the high waves crashing against the shoreline.

When the tourists leave to get ready for dinner or an evening out, Pavlos Beach comes into its own. It is transformed into a quiet place to watch the sun setting majestically in the east behind Rethymnon and the Venetian Fortezza that dominates the town. 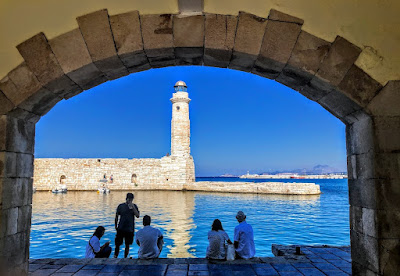 The Venetian harbour and the Ottoman lighthouse of Rethymnon (Photograph: Patrick Comerford, 2021)

Two friends from Leixlip arrived unexpectedly while we were staying in Rethymnon, and I brought them on a walking tour of the town through the narrow streets, the Venetian churches and palazzi, around the harbour and the lighthouse, into the cafés and tavernas, and up into the Fortezza.

I realised then how I have come to feel at home in the town. But, as they asked questions and expressed their awe and surprise, seeing places with new insights, I wondered whether I had come to take the town for granted over these past three or four decades.

As tour groups elbowed their way past us, I also caught a glimpse of how the residents of Rethymnon must feel about the tourists who crowd out their town for six months of the year.

The real impact of the pandemic lockdown on tourism and its impact on local businesses came a few days later when I brought these friends to Maroulas, an old Venetian village in the hills above Platanias. Only one taverna and one shop were open, the main church and the main Venetian tower were locked, and it was only with great difficulty that we found someone to call a taxi back down to Platanias.

I realised how the economy of Crete, and of Greece in general, depends on the earnings of the tourism sector. 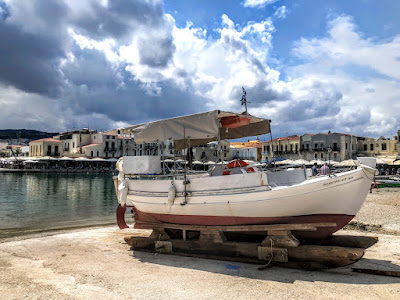 When Zorba dances
with Electra

As we walked around the harbour of Rethymnon in early afternoon sunshine, I noticed a boat named Elektra out of the water and near the old lighthouse.

It brought to mind the score Mikis Theodorakis wrote for the film Electra (1962), two years before Zorba the Greek. The film, starring Irene Papas, is based on the play Electra by Euripides. It was the first in a Greek tragedy trilogy by Michael Cacoyannis, followed by The Trojan Women (1971) and Iphigenia (1977).

His music expressed his political values and fused his idealism and his commitment to freedom. His scores for Zorba and Electra show how Theodorakis caught Greek cultural imaginations, combining Greek traditional music and classical composition, high art and popular culture.

In the week after his death, Theodorakis was described by a leading Greek newspaper, Kathimerini, as ‘Greece’s last enduring myth.’ 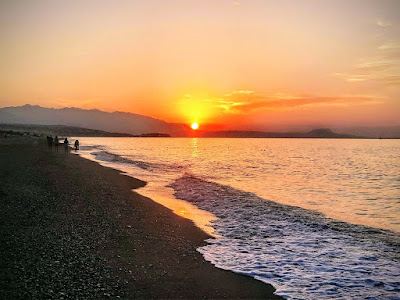 Pavlos Beach, east of the Rethymnon … the sun sets on another holiday (Photograph: Patrick Comerford, 2021)

I'm sorry, but you're very confused.Arkadi Monastery has nothing to do with the making of the movie Zorba.The scenes with the meeting between Anthony Quinn and the monks were filmed at the Agia Triada Tsagaroli Monastery.The dance was filmed on Stavros beach, 3-4 km from this monastery.