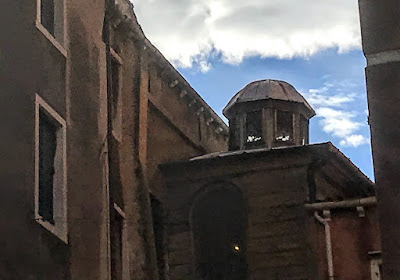 In the square of the Ghetto Nuovo, the cupola above the bimah is the only visible sign of the presence of the Canton Synagogue (Photograph: Patrick Comerford)

I arrived in Venice yesterday, and I am spending a few here, staying at the Hotel San Cassiano in the Ca’ Favretto in the Santa Croce district just a few minutes’ walk from Rialto, and celebrating some important family birthdays and anniversaries.

Photographs of churches in Venice provided the theme for this prayer diary in the week 20-27 June 2021. So, instead, as part of my reflections and this prayer diary this week, my photographs are from the ghetto in Venice. I am looking at each of the five historic synagogues in the Ghetto in turn each morning this week.

My photographs this morning (9 November 2021) are from the Scuola Canton, built as a private synagogue for four Ashkenazic families of French origin who funded its construction in 1531-1532. 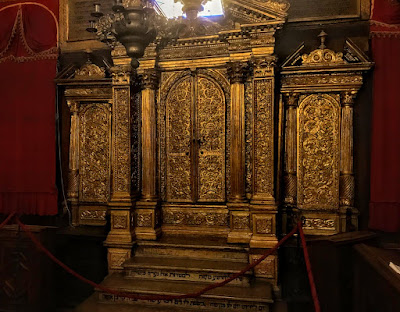 The Aron haKodesh or Holy Ark in the Canton Synagogue in Venice (Photograph: Patrick Comerford)

The Canton Synagogue (Scuola Canton) is one of five synagogues in the Ghetto. Itwas completed in 1532, four years after the nearby Scuola Grande Tedesca (1528), making it the second oldest surviving synagogue in Venice.

Standing in the square, the little cupola above the bimah is the only visible sign of the presence of the Canton Synagogue.

The origins and the name of this synagogue are uncertain: it may have been built as a prayer room for a group of Provençal Jews soon after their arrival in Venice, or as a private synagogue for a prominent local family. Since then, it has been remodelled repeatedly, and inside it is decorated in the Baroque and Rococo styles.

The name ‘Canton’ may come from the older name of the site, canton del medras or ‘corner of the Midrash, a reference to the building’s position in the southern corner of the square of the Ghetto Nuovo.

Another theory suggests the word derives from the Canton (or Cantoni) family that financed building the synagogue. This suggestion is supported by the fact that three Jewish prayer rooms once located in the Ghetto Nuovo – Scuola Luzzatto, Scuola Coanim and Scuola Meshullamim – bore the names of their founding families.

The synagogue was restored in 2016-2017 with support from the World Monuments Fund. 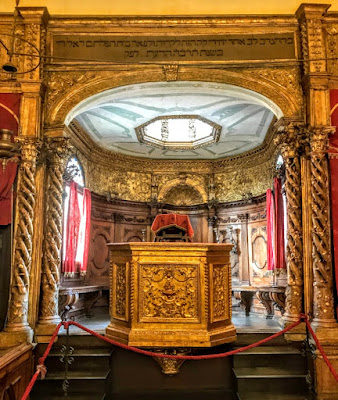 The bimah in the Canton Synagogue in Venice (Photograph: Patrick Comerford)

[Jesus said:] 7 ‘Who among you would say to your slave who has just come in from ploughing or tending sheep in the field, “Come here at once and take your place at the table”? 8 Would you not rather say to him, “Prepare supper for me, put on your apron and serve me while I eat and drink; later you may eat and drink”? 9 Do you thank the slave for doing what was commanded? 10 So you also, when you have done all that you were ordered to do, say, “We are worthless slaves; we have done only what we ought to have done!”.’ 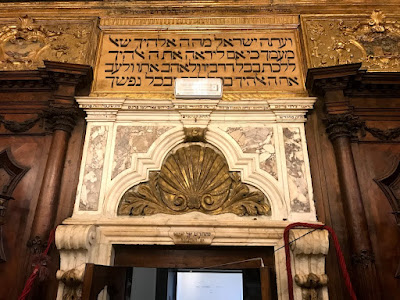 The Prayer in the USPG Prayer Diary today (9 November 2021) invites us to pray:

Let us pray for the World Student Christian Federation and the work it does to show university students the radical inclusivity of God’s love.

The Canton Scuola is recognisable from the square outside by its small domed skylight (Photograph: Patrick Comerford)