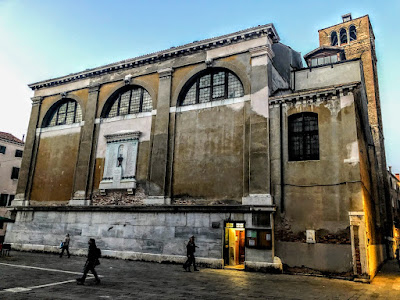 The Church of San Cassiano in the San Polo sestiere of Venice stands on the Campo San Cassiano, the site of the world’s first public opera house (Photograph: Patrick Comerford, 2021)

As part of my reflections and this prayer diary this week, I am looking at seven more churches I visited in Venice earlier this month. This theme continues this morning (23 November 2021) with photographs from the Church of San Cassiano in the San Polo sestiere of Venice. 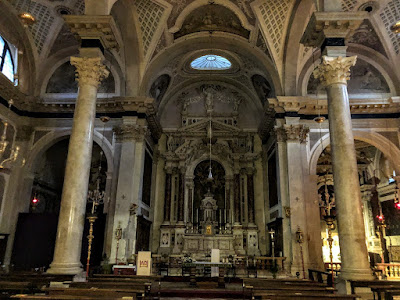 Inside the Church of San Cassiano, richly decorated in a Baroque style (Photograph: Patrick Comerford, 2021)

San Cassiano is a 14th-century church and was the church nearest to the hotel I was staying in, the Residenza D’epoca San Cassiano. A church has stood on the site since 726. The present church, dedicated to Saint Cassian of Imola, was consecrated in 1376 and remodelled in the 17th century. It has a plain exterior with several adjacent buildings overlapping it. Its interior, however, is richly decorated in a Baroque style.

The church is located on the Campo San Cassiano, the site of the world’s first public opera house, west of the Rialto Bridge, and has three paintings by Tintoretto.

The earliest church on this site was built in 726 and dedicated to Saint Cecilia, the patron saint of musicians and music. Over the centuries, there have been several rebuilding projects, including one following a fire in 1106, and a major rebuild that commenced in 1350.

The church was consecrated in 1376 and re-modelled in the early 17th century to give it its current appearance which dates from 1663. A large campanile, 43 metres high, was added to the church in the 13th century, although its rugged style suggests it may have been a guard tower later acquired by the church.

A door on the side facing the water once had a porch or portico, but this was demolished in the 19th century.

The church is typically described as having the appearance of a ‘big box’ with buildings close by and overlapping on several sides. Unlike many churches in Venice, it has no façade and the exterior is plain and unadorned.

A feature that may have survived from the original church is the door jambs or doorposts, dating back to the Byzantine era. Entry to the church is usually through a side door in the wall facing the Campo San Cassiano.

In contrast to the plain exterior, the interior is highly decorated in the Baroque style. It has an altar by Heinrich Meyring and Nardo. Meyring is notable for the large altar he produced for the Church of San Moisè, also in Venice.

The ceiling of the church was painted by Costantino Cedini, a student of Giambattista Tiepolo, and has recently been restored. In 1746, Abbot Carlo del Medico commissioned a chapel which is located on the left-hand side of the church. It contains an altarpiece dating to 1763 and a ceiling fresco, both by the artist Giambattista Pittoni.

The chancel of San Cassiano houses three paintings by Tintoretto, who was once a parishioner: ‘The Resurrection,’ ‘The Descent into Hell,’ and ‘The Crucifixion,’ completed between 1565 and 1568. John Ruskin described Tintoretto’s ‘Crucifixion’ as ‘the finest in Europe’ and noted its particularly interesting perspective which Ruskin said gave the viewer the impression that they were ‘lying full length on the grass, or rather among the brambles and luxuriant weeds.’

Tintoretto’s Resurrection was painted in defiance of a decree of the Council of Trent that all depictions of the Resurrection feature a standing, rather than hovering, Christ figure.

The Sicilian artist Antonello da Messina was commissioned by Pietro Bon to paint an altarpiece for the church. Completed between 1475 and 1476, his Sacra Conversazione was one of the earliest appearances of oil in the artworks of Venice. It brought a style of altarpiece that would be imitated by other Venetian artists, including Giovanni Bellini, Giorgione and the Vivarini brothers, Antonio and Bartolomeo, establishing a template that would be used all the way through to Titian.

However, the most famous painting associated with the church is no longer there. San Cassiano’s altarpiece, painted by Antonello da Messina, was the first major example of an oil painting in Venice. The altarpiece disappeared from the church in the 17th century and reappeared in Vienna in the private collection of Archduke Leopold William of Austria and was attributed to Giovanni Bellini. After it was removed from Venice, the altarpiece was split into a number of fragments. Only three of these were found and they are now in the Kunsthistorisches Museum in Vienna.

The church also has an early 18th-century painting of the Martyrdom of San Cassiano by Antonio Balestra. It depicts the saint being attacked by school children. The story explains why Saint Cassian of Imola is the patron saint of school teachers.

In 1509, the funeral procession of Catherine Cornaro, the former queen of Cyprus and wealthy Venetian noblewoman, began at San Cassiano. From there it crossed a floating bridge to the Church of Santi Apostoli where she was buried in the Cornaro family chapel.

The playwright Count Carlo Gozzi was buried in the church, but his tombstone has not survived. 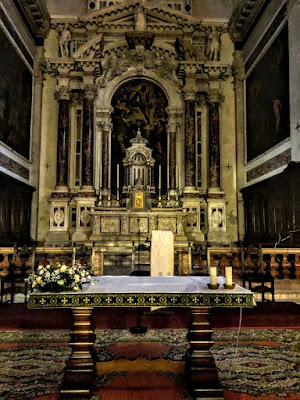 San Cassiano’s altarpiece, the first major example of an oil painting in Venice, disappeared from the church in the 17th century and reappeared in a private collection in Vienna (Photograph: Patrick Comerford, 2021)

9 ‘When you hear of wars and insurrections, do not be terrified; for these things must take place first, but the end will not follow immediately.’ 10 Then he said to them, ‘Nation will rise against nation, and kingdom against kingdom; 11 there will be great earthquakes, and in various places famines and plagues; and there will be dreadful portents and great signs from heaven.’ 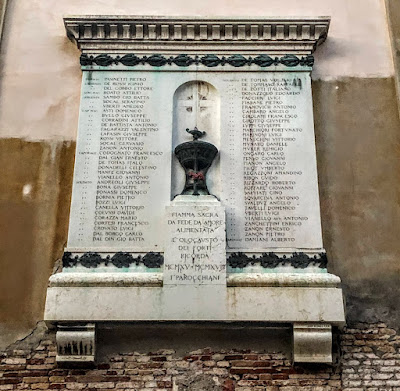 The war memorial on the south wall of the Church of San Cassiano (Photograph: Patrick Comerford, 2021)

The Prayer in the USPG Prayer Diary today (23 November 2021) invites us to pray:

Lord, we pray for the work of the International Anglican Women’s Network. Bless them in all they do to represent women across the Anglican Communion. 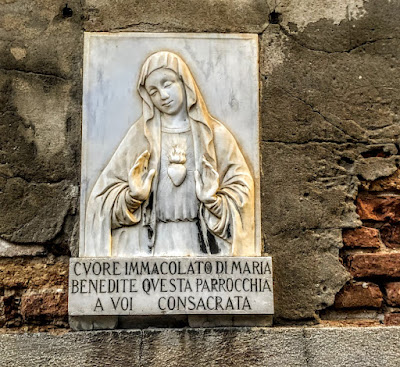 A votive plaque on an exterior wall of the church (Photograph: Patrick Comerford, 2021) 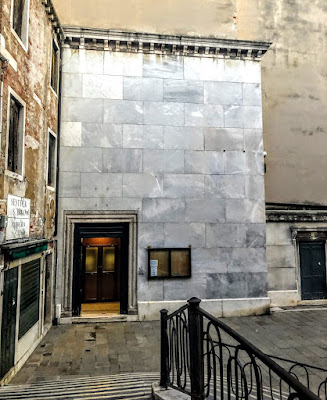 A door on the west side, facing the water, once had a portico, but this was demolished in the 19th century (Photograph: Patrick Comerford)