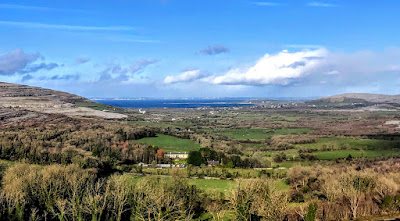 Ballyvaughan overlooks Galway Bay and stands as the gateway on the North Clare coast to the Burren. Corkscrew Hill is a narrow road that rises up from Ballyvaughan, on the road on to Lisdoonvarna, bending and folding several steps, and providing breath-taking views back down across Ballyvaughan and out to Galway Bay.

John Betjeman visited the Burren with ‘Emily’ in the summer of 1943, and described the landscape in his poem ‘Ireland with Emily,’ first published two years later in New Bats in Old Belfries (1945).

As I gazed on the Comerford mausoleum in Bishop’s Quarter in Ballyvaughan, I thought too of John Betjeman and his reference to a ‘fantastic mausoleum’ as he recalled cycling along Corkscrew Hill with Emily almost 80 years ago.

John Betjeman and Emily Sears cycled over Corkscrew Hill on a road built to provide work for starving labourers during the Great Famine a century earlier.

These words are quoted in a sign at the viewing point near the top of the hill, where I had a vista of the natural amphitheatre carved out by giant ice sheets of ancient ice ages. The ice sheets left behind a fertile valley surrounded by Aillwee Mountain to the east, Cappanwalla Mountain to the west, and opening out onto Galway Bay to the north.

The typical and often contrasting characteristics of the Burren are on view there: bare limestone terraces, fertile fields, dense overgrowth of hazel scrub alongside areas of incredible biodiversity created by traditional farming practices.

There are other literary links too. JRR Tolkien often stayed in Gregans Castle, nestling in the valley below, and many have asked whether he was influenced by this view when he was writing Lord of the Rings.

John Betjeman’s lines on the Burren in ‘Ireland with Emily’ may not be the most comprehensive description of this uniquely valuable area of north-west Clare. But he conveys a sense of the overwhelming bareness of its characteristic limestone landscape.

The ‘soil-less, treeless, waterless’ hills of the Burren also made an impression on Robert Lloyd Praeger. In his classic, The Way That I Went, he wrote: ‘The strangeness of this grey limestone country must be seen to be realised; it is like nothing else in Ireland or in Britain.

The archaeological heritage of the Burren is also disproportionately large, with evidence of human settlement in the upland area stretching back through 6,000 years. It includes no less than 350 ring forts, notably Cahercommaun, as well as 70 wedge tombs, the highest concentration known, and numerous fulacht fiadha or cooking sites.

John Betjeman’s relationship with Emily Sears did not last that long. He returned to England, and later became Poet Laureate; she later married Ion Villiers-Stuart. ‘They did, however, remain good friends right up to the end of his life,’ according to her ddaughter, Barbara Grubb, who now lives at Dromana House, near Cappoquin, Co Waterford.

‘Ireland With Emily’ by John Betjeman

Bells are booming down the bohreens,
White the mist along the grass,
Now the Julias, Maeves and Maureens
Move between the fields to Mass.
Twisted trees of small green apple
Guard the decent whitewashed chapel,
Gilded gates and doorway grained,
Pointed windows richly stained
With many-coloured Munich glass.

See the black-shawled congregations
On the broidered vestment gaze
Murmer past the painted stations
As Thy Sacred Heart displays
Lush Kildare of scented meadows,
Roscommon, thin in ash-tree shadows, And Westmeath the lake-reflected,
Spreading Leix the hill-protected,
Kneeling all in silver haze?

In yews and woodbine, walls and guelder,
Nettle-deep the faithful rest,
Winding leagues of flowering elder,
Sycamore with ivy dressed,
Ruins in demesnes deserted,
Bog-surrounded bramble-skirted –
Townlands rich or townlands mean as
These, oh, counties of them screen us
In the Kingdom of the West.

Has it held, the warm June weather?
Draining shallow sea-pools dry,
When we bicycled together
Down the bohreens fuchsia-high.
Till there rose, abrupt and lonely,
A ruined abbey, chancel only,
Lichen-crusted, time-befriended,
Soared the arches, splayed and splendid,
Romanesque against the sky.

There in pinnacled protection,
One extinguished family waits
A Church of Ireland resurrection
By the broken, rusty gates.
Sheepswool, straw and droppings cover,
Graves of spinster, rake and lover,
Whose fantastic mausoleum,
Sings its own seablown Te Deum,
In and out the slipping slates. 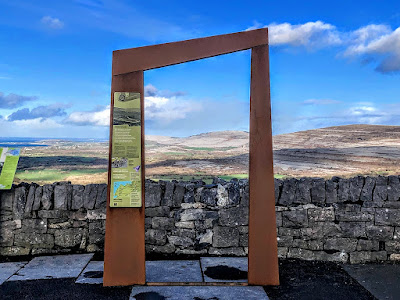 John Betjeman is quoted on a sign at the viewing point near the top of the hill (Photograph: Patrick Comerford, 2022)