For Jewish refugees, every story
is different and everyone has
their own story on this Purim 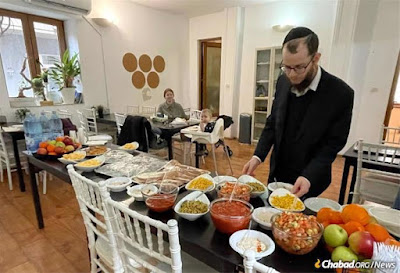 While almost everyone in Ireland, and everyone who claims Irish roots, is preparing to celebrate Saint Patrick’s Day, Jews throughout the world are celebrating Purim, which begins this evening (16 March 2022) and continues until tomorrow evening (17 March).

Purim recalls the account in the Scroll of Esther of how the Jews of Persia were under dire threat of extermination, saved by a divinely orchestrated combination of serendipity, bravery, and faith.

The extreme joy of Purim came after some extremely challenging times. But as Jews everywhere celebrate Purim, many are thinking this evening of those Jewish people in Ukraine, many of them too scared to venture out to celebrate as a community, and thinking of those Jews who will be marking Purim in refugee camps or in unfamiliar surroundings far from their families and their home.

Purim is a story of when the Jewish people in Persia triumphed over those who were set to destroy them. It is a story of our perseverance, and something to celebrate. And so, the story of Esther has particular resonances for Jewish communities and families in Ukraine this week.

In the last two weeks, some 22,000 Jewish Ukrainian refugees have streamed to Ukraine’s borders. There, after a treacherous journey by bus, car or train, they must wait at one of Ukraine’s international border crossings for many hours before their dash to safety is over.

But then they find the journey has just begun. Usually arriving with little more than a carry-on bag and the clothes on their back, they are thrust into the world of the unknown, in foreign countries filled with people speaking languages they do not know. The second phase of the journey is usually through Poland, Moldova, Romania, Hungary or Slovakia.

The World Jewish Congress is working with its two Ukrainian affiliates, the VAAD of Ukraine and the Jewish Confederation of Ukraine (JCU), in an ever-changing and unpredictable crisis.

The situation changes hour-by-hour, but the WJC understands there have been no specific threats directed towards the Jewish community of Ukraine greater than those felt by other Ukrainians.

The JCU is focused on providing critical life-saving aid to the most vulnerable group in this situation – the Jews of Kyiv from the elderly home, among whom are many Holocaust survivors. These people cannot be evacuated due to their age and medical condition.

Jewish communities bordering Ukraine have stepped up to help the refugees entering their countries.

At the Polish and Moldovan borders, Jewish volunteer teams waiting with hot food ready to assist the bedraggled refugees after days of traveling. In Romania, Slovakia and Hungary, private apartments and homes, hotel rooms and even entire campsites and hotels have been secured to house the refugees as they find their bearings and plan the next steps.

The Federation of the Jewish Communities of Romania has two welcome centres on the borders with Ukraine: one at Siret, which is the main border crossing, and one at Sighetu Marmatieti. They are is taking care of about 2,000 Jewish refugees, providing accommodation, food, and medical care, and serving 2,000 hot meals a day, with volunteers distributing clothing and blankets and running a 24/7 helpline in English, Russian, and Hebrew.

Rabbi Naftali Deutsch and Risha Deutsch of Chabad, together with Rabbi Yitzchak Raskin and Dvora Lea Raskin, have been welcoming hundreds of refugees in Bucharest each day, providing a hot, fresh meal and finding a place to stay. When a woman from Odessa went into labour, Risha Deutsch, herself a mother of six, rushed her to hospital, where she gave birth to a healthy child.

Max Feferboim, who arrived in Bucharest from Kyiv through Moldova some days ago, translates, calls hotels to secure rooms, helps refugees get legal documents, and finds doctors and medication. ‘Many older people are arriving; many women and children are arriving alone. They don’t know what to do or where to go,’ he says.

In Iași, Chabad has secured three hotels and is running a massive operation to feed and house the refugees. The effort is being led by Rabbi Shalom Gopin, who arrived in Romania from Ukraine last week. But this is not Rabbi Gopin’s first time on the run: in 2014, he fled Lugansk in eastern Ukraine with his community for Kyiv.

Rabbi Gopin and his wife Chani have rented a hotel, and there they began cooking for hundreds of people for Shabbat. Very quickly, they ran out of food and had to ship more in from Bucharest. He says: ‘This is a humanitarian catastrophe that Europe hasn’t known since World War II. You cannot imagine the terrible pain.’

In Cluj-Napoca, Rabbi Dovber and Fraidy Orgad are feeding and sheltering hundreds of refugees on a daily basis. He rented the biggest hotel in town, koshered the kitchen and transformed it into a refugee camp overnight. One of the first groups to stay there was were children from a Jewish children’s home in Zhitomir, Ukraine.

More than 1 million Ukrainian refugees have crossed over into Poland, including many Ukrainian Jews. In Kraków, Rabbi Eliezer Gurary is working with a local hotel and several private apartments and homes to accommodate refugees from Ukraine. He describes how people arrive at the border with no way forward and in dire need of help.

In Hungary, over 50 Jewish NGOs have formed a crisis team to coordinate relief efforts for refugees from Ukraine. Their actions speak directly to the mitzvah of ‘Tikkun Olam’ – repairing the world.

An aid delivery was recently sent from Hungary to the Jewish community of Ukraine, with sleeping bags, medicine, and food necessities. In Debrecen, close to the border, Rabbi Shmuel Faigen and Riki Faigen have been receiving a constant flow of refugees.

Similar stories are being told in Slovakia, where the Slovakian Jewish community in the last few days is also extremely active in preparing for the influx of potentially larger number of Jewish refugees and to be ready for any scenario possible.

But, of course, every story is different and each person has his or her own story. Volunteers came across one Jewish woman, whose grandparents spoke Yiddish but who received no Jewish education herself. ‘She lit Shabbat candles here for the first time.’