A return to journalism
in Wexford, thanks to
the Tory leadership race 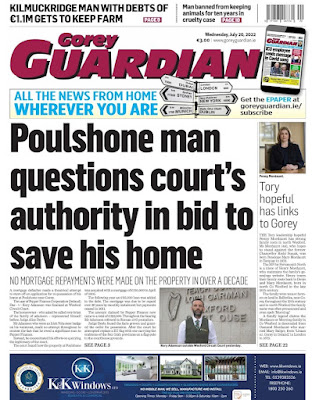 In the early and mid-1970s, I worked for almost three years as a journalist with the Wexford People and other titles in the People Group of Newspapers, including the Enniscorthy Guardian, the Gorey Guardian and the New Ross Standard in Co Wexford, and the Wicklow People and Bray People in Co Wicklow.

It was good to work for these newspapers against this week, writing a feature on the Co Wexford family roots of the Tory hopeful Penny Mordaunt, who was squeezed out of the Tory leadership this afternoon. The latest round of voting today ended with these figures: Rishi Sunak, 137; Liz Truss, 113; Penny Mordaunt, 105.

Before the results were announced this afternon, my research makes a full-page feature inside the Wexford People today (20 June 2022) and the other three local newspapers in Co Wexford, and the Gorey Guardian also carries a front-page ‘curtain raiser’ news report this morning:

Tory
hopeful
has links
to Gorey

The Tory leadership hopeful Penny Mordaunt has strong family roots in north Wexford. Ms Mordaunt (49), who hopes to stand against the former Chancellor Rishi Sunak, was born Penelope Mary Mordaunt in Torquay in 1973.

The MP for Portsmouth North is a niece of Henry Mordaunt, who maintains the family’s genealogy website. Henry traces their family roots back to Denis and Mary Mordaunt, born in north Co Wexford in the late 18th century.

The family were tenant farmers in Ballintlea, near Gorey, throughout the 19th century and in north Co Wexford, where the family name was often pronounced and even spelt ‘Morning.’

A family legend claims the Mordaunt or Morning family in Co Wexford is descended from Osmund Mordaunt who married Mary Bulger ‘from Liran nr. Gorey in Ireland’ in London in 1673.