Praying with USPG and the hymns of
Vaughan Williams: Tuesday 2 August 2022 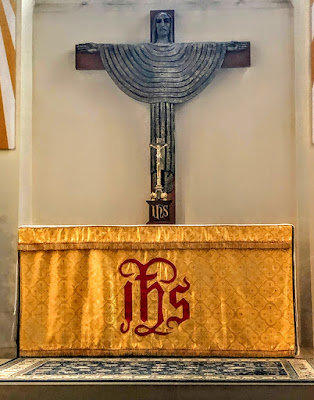 ‘I sometimes think about the cross,/ and shut my eyes, and try to see’ … the Stony Stratford Cross in Saint Mary and Saint Giles Church, sculpted by Antony Weller (Photograph: Patrick Comerford, 2022)

The readings for Morning Prayer in Common Worship this morning include:

16 I repeat, let no one think that I am a fool; but if you do, then accept me as a fool, so that I too may boast a little. 17 What I am saying in regard to this boastful confidence, I am saying not with the Lord’s authority, but as a fool; 18 since many boast according to human standards, I will also boast. 19 For you gladly put up with fools, being wise yourselves! 20 For you put up with it when someone makes slaves of you, or preys upon you, or takes advantage of you, or puts on airs, or gives you a slap in the face. 21 To my shame, I must say, we were too weak for that!

But whatever anyone dares to boast of—I am speaking as a fool—I also dare to boast of that. 22 Are they Hebrews? So am I. Are they Israelites? So am I. Are they descendants of Abraham? So am I. 23 Are they ministers of Christ? I am talking like a madman—I am a better one: with far greater labours, far more imprisonments, with countless floggings, and often near death. 24 Five times I have received from the Jews the forty lashes minus one. 25 Three times I was beaten with rods. Once I received a stoning. Three times I was shipwrecked; for a night and a day I was adrift at sea; 26 on frequent journeys, in danger from rivers, danger from bandits, danger from my own people, danger from Gentiles, danger in the city, danger in the wilderness, danger at sea, danger from false brothers and sisters; 27 in toil and hardship, through many a sleepless night, hungry and thirsty, often without food, cold and naked. 28 And, besides other things, I am under daily pressure because of my anxiety for all the churches. 29 Who is weak, and I am not weak? Who is made to stumble, and I am not indignant?

30 If I must boast, I will boast of the things that show my weakness. 31 The God and Father of the Lord Jesus (blessed be he for ever!) knows that I do not lie. 32 In Damascus, the governor under King Aretas set a guard on the city of Damascus in order to seize me, 33 but I was let down in a basket through a window in the wall, and escaped from his hands. 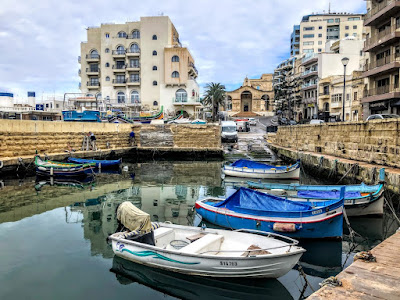 ‘Three times I was shipwrecked’ (II Corinthians 11: 25) … Saint Paul’s Church above the Menqa or boat shelter at the harbour in Saint Paul’s Bay, the site of Saint Paul’s shipwreck (Photograph: Patrick Comerford, 2022)
Today’s reflection: ‘It is a thing most wonderful’

The tune normally used for this hymn is Herongate, an Essex folk song arranged by Ralph Vaughan Williams.

He became a Suffragan Bishop for East London as Bishop of Bedford, and in 1888 he became the first Bishop of Wakefield, a new diocese in the industrial heartlands. His untiring work among the people of the docks and the slums earned him the title of ‘the poor man’s bishop,’ and because he insisted on using public transport he was also known as the ‘omnibus bishop.’ But he liked best his description as ‘the children’s bishop.’ He died in Leenane, Co Mayo, in 1897, while on a fishing holiday in Dulough.

Bishop How, who was strongly influenced by the Tractarian Movement, was the author and editor of several collections of hymns, sermons and children’s stories, many of them published by the Society for Promoting Christian Knowledge (SPCK), and he wrote at least sixty hymns.

His hymns are marked by pure rhythm as well as directness and simplicity, showing a comprehensive grasp of the subject and throwing unexpected light on their themes, with images interwoven with tender thoughts. Although he is seldom thought of as a poet, his hymns have outlived his other literary works and he is one of the most effective Victorian hymn writers.

The tune ‘Herongate’ is one of several folksong melodies collected by Vaughan Williams. He transcribed the tune of ‘In Jesse’s City’ in 1903 when he heard a maid singing that song in Ingrave Rectory near Brentwood, about three miles from Herongate in Essex. It was first used with this hymn in 1906 in the first edition of the English Hymnal, which Vaughan Wlliams edited with Percy Dearmer.

It is a thing most wonderful

It is a thing most wonderful
almost too wonderful to be
that God’s own Son should come from heaven
and die to save a child like me.

And yet I know that it is true:
he came to this poor world below,
and wept and toiled, and mourned and died,
only because he loved us so.

I cannot tell how he could love
a child so weak and full of sin;
his love must be most wonderful
if he could die my love to win.

I sometimes think about the cross,
and shut my eyes, and try to see
the cruel nails, and crown of thorns,
and Jesus crucified for me.

But, even could I see him die,
I could but see a little part
of that great love which, like a fire,
is always burning in his heart.

How wonderful it is to see
my love for him so faint and poor,
but yet more wonderful to know
his love for me so free and sure.

And yet I want to love you, Lord:
O teach me how to grow in grace,
that I may love you more and more
until I see you face to face.

‘We pray for the Anglican Church in Poland which serves communities in Warsaw, Krakow and Gdansk’ … the Mały Rynek or Small Square in Kraków (Photograph: Patrick Comerford)

We pray for the Anglican Church in Poland which serves communities in Warsaw, Krakow and Gdansk.