Praying with USPG and the music of
Vaughan Williams: Saturday 27 August 2022 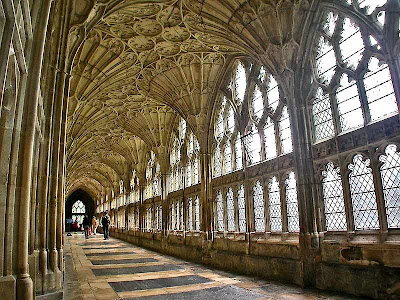 The enclosed monastery cloisters in Gloucester Cathedral … Vaughan Williams conducted the first performance of his ‘Fantasia on a theme by Thomas Tallis’ in the cathedral in 1910 (Photograph: Paradoxplace)

Today, the Church of England’s calendar in Common Worship remembers Saint Monica, the mother of Saint Augustine of Hippo (387) with a Lesser Festival.

Saint Monica in a painting once in Orlagh, the former Augustinian retreat house in Rathfarnham, Co Dublin (Photograph: Patrick Comerford)

Saint Monica was born in North Africa of Christian parents in 332 and she was married to a pagan named Patricius, whom she converted to Christianity. They had three children of whom the most famous was her eldest child, the future Augustine.

Augustine ascribed his conversion to the example and devotion of his mother: ‘She never let me out of her prayers that you, O God, might say to the widow’s son “Young man, I tell you arise”.’ This is why the gospel story of the widow of Nain is traditionally read today as her memorial.

Monica’s husband died when she was 40. Her desire had been to be buried alongside him, but this was not to be. She died in Italy, at Ostia, in 387 on her way home to North Africa with her two sons.

11 Soon afterwards he went to a town called Nain, and his disciples and a large crowd went with him. 12 As he approached the gate of the town, a man who had died was being carried out. He was his mother’s only son, and she was a widow; and with her was a large crowd from the town. 13 When the Lord saw her, he had compassion for her and said to her, ‘Do not weep.’ 14 Then he came forward and touched the bier, and the bearers stood still. And he said, ‘Young man, I say to you, rise!’ 15The dead man sat up and began to speak, and Jesus gave him to his mother. 16 Fear seized all of them; and they glorified God, saying, ‘A great prophet has risen among us!’ and ‘God has looked favourably on his people!’ 17 This word about him spread throughout Judea and all the surrounding country.

Today’s reflection: ‘Fantasia on a theme by Thomas Tallis’

This morning [27 August 2022], I invite you to join me in listening to his ‘Fantasia on a theme by Thomas Tallis.’

The word fantasy or fantasia is sometimes used in music to describe a work that does not follow any set form or pattern. It is also used for compositions that are based on another musical work.

Vaughan Williams’s ‘Fantasia on a Theme by Thomas Tallis’ is also known as the ‘Tallis Fantasia.’ It was written string orchestra by Vaughan Williams in 1910 and it was performed for the first time on 6 September 1910 in Gloucester Cathedral at the Three Choirs Festival, with Vaughan Williams conducting himself.

That evening, most of the attention that evening was devoted to Elgar’s oratorio The Dream of Gerontius. Elgar had once declined a request from Vaughan Williams to take him on as a pupil. Most critics present that evening found Vaughan Williams’s work difficult to take. The critic of the Musical Times wrote: ‘It is a grave work, exhibiting power and much charm of the contemplative kind, but it appears overlong for the subject-matter.’

But the audience that evening also included Herbert Howells and Ivor Gurney, two organ scholars at Gloucester Cathedral who went on to become celebrated composers.

Vaughan Williams had been cycling round the lanes and pubs of Wiltshire, Somerset and Norfolk since 1903, jotting down tunes and ballads from the countryside that inspired his arrangements for hymns in the English Hymnal in 1905, and the music he was writing at the time, including: In the Fen Country, his Norfolk Rhapsodies, The Wasps and On Wenlock Edge.

However, his contributions to the English Hymnal were still anonymous by 1910, and the ‘Fantasia’ heralded the making of his career as well as a new clarity in his art. His A Sea Symphony would have its premiere two months later in Leeds, and he was soon on the way to composing his second symphony, the London Symphony, as well as embarking on his first opera, Hugh the Drover, and the Five Mystical Songs. Folk music, hymn tunes, visionary literature, Renaissance polyphony and cutting-edge orchestration fused in a potent summoning of the humanist New Jerusalem.

The night after the premiere of this Fantasia in Gloucester Cathedral in 1910, Sir Hubert Parry gave a speech in which he declared music to be a socially inclusive agent ‘to get the people from the slums to be elevated by [its] power.’

Vaughan Williams attended meetings of the Hammersmith Socialist Society at William Morris’s home, along with HG Wells and Gustav Holst. This brought him into contact with a Fabian circle that included George Bernard Shaw and George Trevelyan.

A contributor to the Musical Times that month had commented: ‘It is our idiosyncrasy as a nation to prefer religious sentiment to patriotic and national feeling.’ But for Vaughan Williams, the two were inextricably entwined, and the ‘Tallis Fantasia’ is a perfect expression of that unity. He said later: ‘I feel that I am perhaps beginning to emerge from the fogs at last.’

The work is his homage to the Elizabethan composer, Thomas Tallis (ca 1505–1585). Many of Vaughan Williams’s works were inspired by the music of the English Renaissance. In 1906, he included Tallis’s ‘Third Mode Melody’ in the English Hymnal, which he was editing with Percy Dearmer, as his melody for Joseph Addison’s hymn ‘When Rising from the Bed of Death’ (No 92).

Thomas Tallis was a Catholic given a stay of execution among Elizabeth I’s clergy in order to take part in restructuring the Anglican church. The psalm that Vaughan Williams based his Fantasia on is short: a four-line verse that appears in The Whole Psalter Translated into English Metre, published by Matthew Parker, Archbishop of Canterbury, in 1567, nine years after Elizabeth’s coronation.

Why fumeth in fight the Gentile’s
spite, in fury raging stout?
Why taketh in hand the people
fond, vain things to bring about?
The Kings arise, the Lords devise,
in counsels met thereto,
Against the Lord with false accord,
against His Christ they go.

Tallis’s words hover, unvoiced, in the distant background to Vaughan Williams’s ‘Fantasia.’ Tallis and fellow Catholics in the Elizabethan era were entrusted with making church music accessible to untrained congregations while preserving a sense of spiritual wonder. They achieved this by drawing on popular songs and ballads, just as Vaughan Williams did for the English Hymnal.

Although this ‘Fantasia’ was not recorded until 1936, later classic post-war recordings by John Barbirolli, Adrian Boult and Richard Hickox have become bestsellers. It is a regular fixture in the BBC’s ‘Hundred Best Tunes.’

In a recent poll of the most popular classical pieces of music, listeners voted this piece third on the Classic FM ‘Hall of Fame.’ First place has gone consistently to a later Vaughan Williams’s piece, ‘The Lark Ascending.’

In structure, this piece resembles the Elizabethan-age ‘fantasy.’ The theme is heard in its entirety three times during the course of the work, but the music grows from the theme’s constituent motives or fragments, with variations upon them. A secondary melody, based on the original, is first heard on the solo viola about a third of the way into the Fantasia, and this theme forms the climax of the work about five minutes before the end.

Vaughan Williams’s ‘Fantasia on a Theme by Thomas Tallis’ provides a bridge between the Tudors and the early 20th century. It contains many of his trademarks, particularly the way he whets his chord harmonics with the flattened seventh, a staple of English folk, and the minor third, the key feature of Tallis’s setting.

The piece is open to a rich range of readings, even fantasies, not least that it enacts and heals the rupture of English Catholicism and Protestantism. It is not rapturous, like ‘The Lark Ascending,’ composed four years later, but a solemn, controlled release, the product of a mind in visionary mode, and appropriate listening for this Saturday morning. 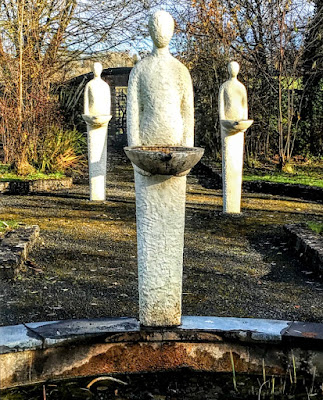 Faithful God,
who strengthened Monica, the mother of Augustine,
with wisdom,
and through her patient endurance encouraged him
to seek after you:
give us the will to persist in prayer
that those who stray from you may be brought to faith
in your Son Jesus Christ our Lord,
who is alive and reigns with you,
in the unity of the Holy Spirit,
one God, now and for ever.

Father,
from whom every family in heaven and on earth takes its name,
your servant Monica revealed your goodness
in a life of tranquillity and service:
grant that we who have gathered in faith around this table
may like her know the love of Christ
that surpasses knowledge
and be filled with all your fullness;
through Jesus Christ our Lord.

The theme in the USPG prayer diary all this week has been ‘The Pursuit of Justice.’ This theme was introduced on Sunday by Javanie Byfield and Robert Green, ordinands at the United Theological College of the West Indies.

Let us pray for those who devote their lives to challenging injustice. May they be filled with the Spirit and love for humanity.