‘We are one, after all, You and I:
Together we suffer, together exist’ 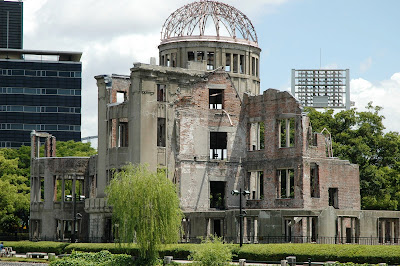 Tomorrow marks the anniversary of the atomic bombing of Hiroshima 77 years ago on 6 August 1945. During the week, I have been listening once again to Leonard Bernstein’s Symphony No 3 (Kaddish).

The composer Leonard Bernstein was a peace advocate who travelled the world to share his music in joy and peace. Even in the later years of his life, he continued to share music in moments of historical importance.

On the 40th anniversary of the bombing of Hiroshima, Bernstein travelled back to Japan in 1985, to attend the Hiroshima War Memorial event as part of his ‘Journey of Peace’ series of concerts.

Later in the evening Bernstein performed his own Kaddish. It was originally dedicated to John F Kennedy after his assassination and it is named after the Jewish prayer chanted at every synagogue service.

Before a full house of 1,800, Bernstein conducted the European Community Youth Orchestra in moving performances of Beethoven’s Leonore Overture No 3 and his own Symphony No 3 (Kaddish), composed on the theme of a prayer for peace.

The Japanese audience was deeply moved, and people applauded Bernstein for 10 minutes at the end.

He said, ‘I hope it does some good to grant us the wisdom that war is obsolete and that we should stop all this nonsense once and for all.’

For Jews everywhere, the word Kaddish (‘Sanctification’) has a highly emotional significance. It is the name of the prayer recited for the dead at the graveside, on memorial occasions and at all synagogue services. Yet, there is not a single mention of death in the entire prayer. On the contrary, it uses the word chayei or chayim (‘life’) three times. Indeed, the Kaddish is a series of paeans in praise of God.

In his Kaddish Symphony, Bernstein exploits the dualistic overtones of the prayer: its popular connotation as a kind of requiem, and its celebration of like and creation. He does this both in his speaker’s text and in his music.

In the original version, the choice of a woman as the Speaker and as vocal soloist – singing sacred words traditionally reserved for men in the synagogue – was in itself a dualistic decision. The woman in the symphony represents that aspect of humanity that knows God through intuition, and can come closest to Divinity, a concept at odds with the male principal of organised rationality.

The Speaker mourns, in advance, humanity’s possible imminent suicide. At the same time, it is observed that people cannot destroy themselves as long as they identify themselves with God.

There is a particularly anguished outburst by the Speaker in the middle of the Din-Torah (trial-scene or ‘Judgement by Law’) in which God is accused of a breach of faith with humanity.

This scene has a Biblical precedent in the story of Job and also has its roots in folk such as the legend of Rabbi Levi Yitzhok of Berditchev. Bernstein strongly felt the peculiar Jewishness of this ‘I-Thou’ relationship in the whole concept of the Jew’s love of God, from Moses to the Hasidim, there is a deep personal intimacy that allows things to be said to God that are almost inconceivable in other religions.

This change is manifested by agonized, non-tonal music which culminates in an eight-part choral cadenza of vast complexity. But immediately after this, the Speaker begs God’s forgiveness and tries to be comforting; and the ensuing lullaby is explicitly tonal, with gentle modulations.

At the climax of the Symphony, another painful spoken moment is followed by a gradual clarification and resolution into G-flat major.

The concluding words are: