On a recent visit, I could hardly resist visiting Comerford Way, off Station Road.

At one time, I thought this modern housing development took its name from an area known as Great Comerford. But it transpires that Comerford Way is named after Denis Comerford, who lived at No 11 Station Road and who was the last railway signalman at Winslow Station.

Denis Comerford worked at Winslow station from 1937 until 1968, when the railway line and the station closed and he was made redundant.

The original station (1850-1968) in Winslow was on the historical Varsity Line between Cambridge and Oxford or Banbury Merton Street, where it was an important stop before the routes diverged.

Thomas Brassey employed 2,000 navvies in 1847 to build the Bletchley to Banbury railway line. He also set aside £200 for their religious education.

Winslow Station was opened by the Buckinghamshire Railway on 1 May 1850 as part of this line from Banbury to Bletchley. The line was later extended westwards to Islip, to a temporary station at Banbury Road and then to Oxford, opening throughout on 20 May 1851. There were four trains each way daily.

The London and North Western Railway (LNWR) absorbed the Buckinghamshire Railway in 1879.

Winslow Station was conveniently situated at the end of Station Road which branches off from the High Street, serving the village of Winslow, which then had 1,805 inhabitants. The coming of the railway had a significant impact on the village, resulting in its northward extension and the opening of a ‘Railway Inn.’

The station declined after World War II, and in 1963 Winslow station was listed for closure in the Beeching report, which called for the closure of all minor stations on the line.

Winslow closed to goods traffic on 22 May 1967 and to passengers on 1 January 1968; the signal box followed one month later. The closure was delayed because replacement bus services were not able to handle the projected extra traffic. The line between Oxford and Bletchley was closed to passengers and local goods services, and later singled in 1985.

Winslow station continued to be used during the 1980s for ‘Chiltern Shopper’ specials and British Rail handbills survive that show services calling at the station during November and December between 1984 and 1986.

The station building, by then in a very derelict state, survived long enough to see the first visit of a Class 43 on 13 February 1993, but was demolished shortly afterwards.

Now, a new station is planned for Winslow as part of the East-West Rail project to re-establish the route between Oxford and Cambridge.

A site for the new station has been bought at the junction of Buckingham Road with Horwood Road. Buckinghamshire County Council acquired the new site for £900,000, according to reports in 2016. Groundworks began in Summer 2021, and the construction of the station is due to be completed in summer 2023.

When the line opens, Winslow should have direct trains to Oxford, Milton Keynes Central and Bedford. The journey time from Winslow to Oxford is estimated at 27 minutes.

No 63 Station Road, Winslow, was once the Station Inn (Photograph: Patrick Comerford, 2022)

Denis Comerford lived at No 11 Station Road. Station Road was known as Railway Station Road until 1864. The road existed in 1838, although most of the houses on the north side were built in the mid-1800s.

No 63 Station Road was once the Station Inn, and Station Road became the second most populated street in Winslow.

Comerford Way, which keeps alive the memory of Denis Comerford, is a new housing development at the east end of Station Road in Winslow, at the junction with McLernon Way.

McLernon Way keeps alive the memory of H McLernon, another Signalman at Winslow Station. He was a colour sergeant during World War I, and his son, George McLernon, was Mayor of Winslow in the 1980s.

Another signalman is remembered in the name of Rolfe Close, off Verney Road, named after Jessie and Bert Rolfe. Jessie was the district nurse and midwife for 40 years, and delivered more than 1,000 babies.

They moved from Horn Street to a purpose-built house with a treatment room in Highfield Road. Bert was born in a small cottage on High Street in 1893; he was a signalman at Winslow Station and worked on the railways for 40 years. 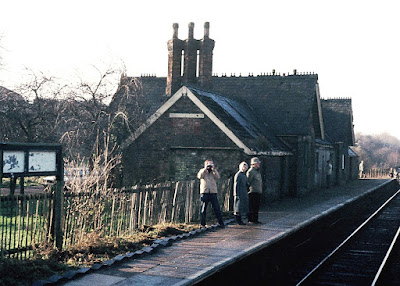