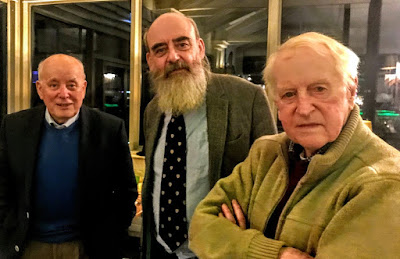 Three friends and former colleagues in Wexford have died recently. I first got to know Hilary Murphy, Nicky Furlong and Gerry Breen 50 years ago, when I worked with them in the Wexford Peoplemonths. I also worked closely with all three of them on many local history projects.

Hilary Murphy, who died last week, was a former assistant editor of the Wexford People, a journalist, author, genealogist and historian.

Hilary Murphy, who lived at Parklands, Wexford, was originally from Tilladavins, Tomhaggard, with deep family roots in the Screen-Curracloe area. He began working as a journalist with the Free Press before joining The People Newspapers in 1965. He initially worked in Arklow, Co Wicklow, with the Wicklow People, before moving to New Ross.

He returned to Wexford town around 1971 to the People Newspapers head office to work as a sub-editor. Later he became the assistant editor.

For some years, Hilary edited the Journal of the Wexford Historical Society, to which I was a regular contributor. He was a founding editor of the Kilmore Parish Journal. He contributed annually to the journal for over 40 years before retiring in 2012.

Hilary died in the care of the staff at Knockeen Nursing Home last week. He was predeceased by his wife Bernadette, and is survived by a large family, as well his former colleagues at The People Newspapers. 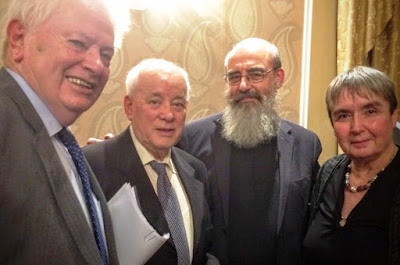 With Peter Prendergast, Hilary Murphy and Celestine Murphy at the launch of the ‘Journal of the Wexford Historical Society 2014-2015’

Nicky Furlong, who died earlier this year (21 March 2022), was a farmer, journalist, author, historian and playwright and Vice-President of the Wexford Historical Society.

For many years he wrote a satirical column for the People Group under the pen name ‘Pat O’Leary,’ and was a columnist with Echo Group Newspapers in Co Wexford – the Wexford Echo, the Enniscorthy Echo and the New Ross Echo.

Some years ago, he managed to make me the victim of his April Fool’s prank in the Echo newspapers in 2009. On their front pages, the Echo newspapers carried reports and photographs of sharks spotted variously in Wexford Harbour, in the Slaney at Enniscorthy and in the Barrow near New Ross. The sightings were confirmed by no less an expert in large fish than one Mr Ray Whiting.

Beneath the dateline on the page, Nicky also carried a preposterous report with the headline, ‘Wexford man’s church promotion,’ welcoming the news that claiming I, as his ‘colleague journalist in Wexford is to become Dean of St. Patrick’s Cathedral in Dublin.’

His prank news item mixed fact and fantasy. I had ‘spent [my] holidays in Greece, Armenia, Ethiopia and even Soviet Russia when religion of any kind was forbidden.’ And, he added, my ‘colleagues in these parts, being of an excitable nature, have already focussed eyes on a mitre. In any event, we are pleased.’

It was hard to know who was more upset that April Fool’s Day – the then Dean of Saint Patrick’s, or those who had ambitions to succeed him.

I was one of the contributors to The Wexford Man, a collection of 22 essays addressed to Nicky Furlong by distinguished scholars, colleagues and friends, all focussing on matters relating to Co Wexford. It was a long-standing tribute to Nicky Furlong for outstanding service to his native county.

The former editor of the Wexford People Gerry Breen died earlier this year at the age of 88 in January.

Gerry grew up in Davitt Road, Wexford, and later in Swan View, and left school at the age of 13. His , first job was ‘licking stamps and delivering parcels around the town’ with Huggard Brennan. He attend evening classes and night classes in Wexford Tech. Gerry and Marie were both singers in the Wexford Festival Opera chorus and they sang together on stage in 1952.

He joined the Wexford People as a young reporter in the mid-1950s, when it was a privately owned firm. He later became a sub-editor and then assistant editor to the late Tom Fane, before taking on the role of editor before Independent Newspapers bought the company in the early 1970s.

Gerry offered me my first job with the Wexford People as a subeditor 50 years ago, after only the briefest of interviews on a Sunday afternoon in the Talbot Hotel in 1972. I worked with him and Hilary and a team of wonderful colleagues and friends for almost three years before leaving for The Irish Times.

Hilary and Gerry worked closely together. During his years at the Wexford People, Gerry saw the transformation of the newspaper and print industry from the time of hot metal to computerisation, the switch from broadsheet to tabloid, and the then revolutionary replacement of advertising on the front page by news headlines around 1970.

In all, he worked for 46 years with the Wexford People. Later, he spent many years as editor of Ireland’s Own, and he continued writing articles for the magazine until late last year, only retiring only in December. He also edited the journal of Rosslare Historical Society.

He was a driver and volunteer for the oncology outpatients at Wexford General Hospital, was involved in fundraising for the scouts, the Faythe school board of management, and was a walking tour guide at Wexford Festival Opera. He is survived by his Marie and a large family, as well his former colleagues at the People Newspapers.

Hilary Murphy and Nicky Furlong were two among a group of Wexford historians who travelled to Dublin, along with King Milne and Rory Murphy, for my ordination in Christ Church Cathedral.

Over the years, I continued to keep in touch with Hilary and Nicky, meeting at book launches, lunches and a recent memorable dinner by the banks of the River Slaney in Ferrycarrig, where we regretted not being joined by Gerry Breen.

We have all contributed, in our own ways, to Wexford journalism and to telling the history of Wexford. Time moves on – in history, in life and on river – and each passing phase brings new opportunities and new blessings. 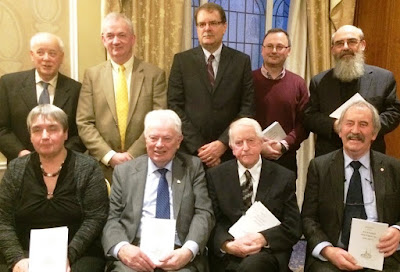 At the launch of the ‘Journal of the Wexford Historical Society’ in 2015 (right, back row) with Hilary Murphy (left back row), Jarlath Glynn, John Patterson and Tom Ryan; and (front): Celestine Raferty, Peter Prendergast, Nicholas Furlong and Brian Matthews