DNA research is providing new
challenges to the myths, legends
and past approaches to genealogy In recent days, my attention has been drawn to ‘The Similar-Sounding Surnames of Haplogroup R-BY140757,’ a paper last year by Dr Mike Fitzpatrick of the University of Auckland, and published in the Journal of the Fitzpatrick Clan Society 2 (2021), pp 1-41.

Y-DNA analysis is a remarkable method that can inform patrilineal genealogies, both ancient, and modern. Applied here to facilitate a critical review of Branan pedigrees, an analysis of haplogroup R-BY140757 results in a deep questioning of the dominant narratives of the O’Braonáin Uí Dhuach (O’Brenan of Idough). What results is a disruption of those narratives that is total.

The O’Braonáin Uí Dhuach were long said by historians of Ossory to share descent from Cearbhall, King of Ossory (843-888 AD). However, the ultimate genealogical authority of Dubhaltach Mac Fhirbhisigh led to the argument that these families are not of Ossory descent, but are an Uí Failghi tribe.

As he set out on his research, Mike Fitzpatrick realised than Y-DNA connections between Branans, or those with similar-sounding surnames such as Brennan, and other connected families, are a false trail for those who claim descent from Cearbhall.

Once Mac Fhirbhisigh is embraced, he found, and the erroneous pedigrees of the O’Braonáin Uí Dhuach are set aside, the origins of men with the name Branan, and similar-sounding surnames, of haplogroup R-BY140757, can be correctly determined.

With an analysis of Y-DNA haplotype research, Dr Fitzpatrick has concluded the origins of these families are not with the O’Braonáin of Uí Dhuach, or any Irish clan. ‘Rather, haplotype R-BY140757 appears to have originated from a family who settled near Braham, in Suffolk, after the Norman conquest of England.’

He identifies the key figure in the appearance of R-BY140757 pedigrees in Ireland as Sir Robert de Braham, who was Sheriff of Kilkenny ca 1250.

Genealogists constantly face a battle of the brains with families who continue to prefer to perpetuate myths about family origins, repeated and retold over the generations and down through time, instead of accepting research that uses the accepted tools of modern historical research that demands primary sources and refuses to accept past genealogical constructs that satisfied the vanities of family members in the past.

All genealogists working on the stories of families know the pitfalls of accepting the family trees and pedigrees confirmed in the past by the Ulster Office of Arms or repeated uncritically by John O’Hart and even in volumes such as Burke’s Peerage and Burke’s Landed Gentry.

Although I have constantly produced evidence for the origins of the Comerford family in Co Kilkenny and south-east Ireland, the old tales keep being peddled on many websites that rely on a ‘copy-and-past’ approach rather than genuine historical research as they sell their cheap name books and tardy mass-produced coats of arms and so-called heraldic scrolls.

In my research, I have had to cast a critical eye on the research and work of even more recent historians, including Canon William Carrigan, despite his often-painstaking work in compiling his four-volume History of the Diocese of Research, published in 1905.

Mike Fitzpatrick’s research came to my attention recently because he refers to an earlier paper in 2005 in which I drew attention to the way Carrigan avoided a critical approach to the lives of clergy in his diocese, including Edmund Comerford, Bishop of Ferns and Dean of Ossory, and his son, William Comerford, Dean of Ossory, who is described in many places as the bishop’s newphew rather than son.

Drawing on my paper, published as ‘The last pre-reformation Bishop of Ferns and his ‘nephew’, the Dean of Ossory,’ in the Journal of the Wexford Historical Society, 20 (2005), pp 156-172, Fitzpatrick concedes that Carrigan is ‘excellent in many respects,’ but agrees that he ‘was possibly also subject to conflicts of interest; he was a sidestepper of unbecoming acts by clergy.’

He also says Carrigan ‘avoided an exposition of the clerical lineages of Mac Giolla Phádraig Osraí,’ the FitzPatricks of Ossory, ‘which must have been known to him,’ although he concedes that ‘the suite of Papal records available to Carrigan was not as complete as it is today.’

Dr Fitzpatrick’s methodology and approach are important advances in genealogical research. In a paper this year, co-authored with Dan Fitzpatrick and Ian Fitzpatrick, he develops his scientific approaches to challenging traditional but myth-laden and fact-denying constructions of family trees and pedigrees.

Their latest paper, ‘Mac Giolla Phádraig Dál gCais: an ancient clan rediscovered,’ is published in the Journal of the Fitzpatrick Clan Society 2022 (3), pp 1-45.

They say that Y-DNA analysis of Fitzpatricks has turned traditional historical narratives of how the surname was taken on its head. ‘The attachment of the surname Fitzpatrick to the Barons of Upper Ossory, who were supposedly the descendants of Mac Giolla Phádraig Osraí and, in turn, of an ancient [Leinster] lineage, is no longer sustainable.’

They go on to say that ‘DNA insights and critical assessment of historical records have demonstrated that those who claim to descend from the barons [of Upper Ossory] have a Y-haplotype consistent with them emerging from a line of clerics out of a Norman-Irish origin ca 1200 AD.’

They say that questions now arise ‘regarding the origins of other large Fitzpatrick groups who, based on Y-DNA, can be shown to descend from ancient Irish.’ And they ask, ‘Could any of these lines descend from the Mac Giolla Phádraig Osraí of old, those of Annalistic fame?’

They question the origins of the Mac Giolla Phádraig or Fitzpatrick family that claimed an ancient lineage with origins in Ossory. They say their questions radically disrupt traditional narratives, point how ‘sound historical, genealogical, and name occurrence evidence supports the view’ that there is no need to adhere to a singular patrimony for the Mac Giolla Phádraig Osraí or Fitzpatricks of Ossory.

Instead, they show in their latest paper, the FitzPatricks of Ossory ‘are Dál gCais on a genetic basis since, via their paternal haplotype, they share common ancestry with Brian Bóruma, High King of Ireland.’

The descendants of those Mac Giolla Phádraig Dál gCais feature through ancient records for Co Clare and are still found in the county, yet, they suggest many derive from lines that were dispersed from their ancient Clare homelands in the 17th century.

From Co Clare to the Aran Islands, and Co Galway, and – one way or another – on to Mayo and Roscommon, ‘they are a great and ancient Mac Giolla Phádraig Clan,’ they say, ‘who at times held much wealth, power, and influence. And some were smugglers!’

Their work is a challenge to the way Irish genealogists have worked in the past, and is a pioneering approach to genealogical research in Ireland.

There are some interesting inter-marriages between the Comerford family of Ballybur and the FitzPatricks of Ossory. For example, Richard Comerford (1564-1637), of Ballybur Castle was the father of Ellinor Comerford, who married her second cousin, the Hon Dermot FitzPatrick, son of Thady FitzPatrick, 4th Baron Upper Ossory. Anne Langton, who married James Comerford of the Butterlsip, Kilkenny, was a half-sister of Mary Fitzpatrick, who also lived at the Butterslip.

But for some of the details of Ellinor Comerford and Dermot Fitzpatrick I have relied in the past on Carrigan, and the pedigrees of the FitzPatricks of Gowran and Upper Ossory in Burke’s Extinct Peerage and the Complete Peerage. I may have to revisit some of those sources in time. 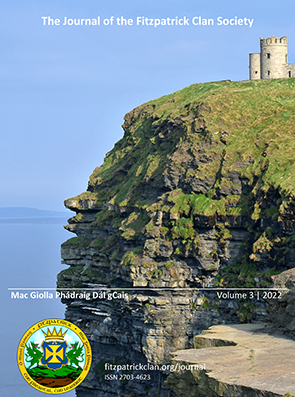 Thanks Patrick this is a very interesting article. DNA is endlessly fascinating and a great method to support the paper trail when we are not sure. FamilyTreeDNA have a Y-DNA study going for the Comerford Family they are trying to map the various branches of the family and it will go a long way to being able to ultimately sort out our interconnecting family lines.

Caution: these new revisionist theories proposed by Dr. Mike Fitzpatrick and his organization the Fitzpatrick Clan Society may be considered highly controversial and have not yet been subjected to critical analysis. These papers radically revise the long-standing history of several Irish clans. Please note that the ideas expressed in his papers, just like any other historical thesis, ought not to be accepted uncritically, and only the test of time will show them to be correct or not.

Comments on this posting have been suspended for the time being.

Yes critical review is important and even more so, I think, when articles touch at the heart of matters of identity. As I have written elsewhere, genetic genealogy can result in not only an identity crisis for individuals, but for entire clans; see: https://www.mdpi.com/2313-5778/4/1/25. So we tread carefully, not wanting to harm unduly.

The Journal of the Fitzpatrick Clan Society articles are all subjected to high-level peer review. If anyone wants clarification on that, they can contact the peer reviewers we have drawn on from time to time: Dr Paul MacCotter; Luke McInerney; Proinsias Mag Fhionnghaile, CIOM, or Dr Esther Fitzpatrick.

These are all respected scholars and have substantial bodies of scholarly works. I trust their judgements, and surely if you could see some of their comments on my draft versions you would know they take the review process very seriously. Hence, our articles are scrutinised long before they get out of the door. The revision of faulty or deficient work is a good thing, and if my work results in healthy academic discussion, all the better.

But we cannot, for fear of upsetting people, ignore the priceless records of Irish contained in the scarcely utilised sources, such as the Papal Registers and the Fiants, deserve much better, even if some of them might make dear old Rev. Carrigan turn in his grave.