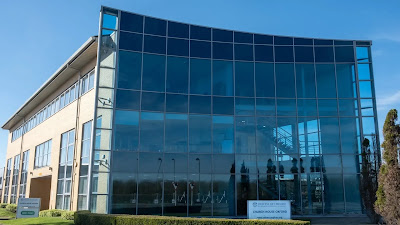 I was in Church House, Kidlington, last week for a meeting in the Diocese of Oxford, a vast diocese that stretches from the Cotswolds to the edges of London, that embraces Oxfordshire, Buckinghamshire and Berkshire, and that includes pretty country villages and towns, the old university city of Oxford and the new city of Milton Keynes. The Diocese of Oxford has more church buildings than any other diocese in the Church of England and has more paid clergy than any other diocese except London.

But, despite this variety, Church House is not much to write home about. It is a brash, modern office block, located on a business park at Langford Locks near Oxford Airport.

Despite what I say, the staff are welcoming, the facilities are excellent, and the welcome area is brightly decorated, including interesting paintings of Jerusalem by Alfred Daniels.

Alfred (‘Danny’) Daniels (1924-2015) came from an East End Jewish family. He had a whimsical touch and his paintings are full of colour and detail. He was once described as a ‘Lowry for Londoners.’ He studied signwriting and typography at Woolwich Polytechnic and the Royal College of Art, and later taught at Hornsey College of Art in London in the 1960s and at Sir John Cass School of Art, and retained a particularly expertise in graphic design.

The Diocese of Oxford is not the only important organisation to locate its offices in Kidlington: the headquarters of Oxfordshire Fire and Rescue Service, Thames Valley Police and the county Saint John Ambulance are also based in Kidlington.

Kidlington still insists on calling itself a village, although it has a population of up to 14,000 people. So far, the people of Kidlington have been successful in resisting all efforts to change its official status to a town. After the Parish Council opted for town status in 1987, the decision was voted down three months later by 83 per cent of voters in a ballot of the local electorate.

Kidlington is between the River Cherwell and the Oxford Canal, 8 km north of Oxford and 12 km south-west of Bicester. I was heading back to a second meeting in Henley Church End in Milton Keynes that day, so I never got to see either Bicester on the way or Kidlington itself, or to take any photographs in either place. But obviously there is a lot to see, according to reports some years ago by the BBC and the New York Times.

Back in 2016, they reported weekly coachloads of sightseers from China arriving on Benmead Road, Kidlington, and posing for ‘selfies’ in front gardens and against parked cars, with no apparent reason for their interest. The reports attracted worldwide interest, with local people in Kidlington being interviewed about their experience.

The theories for the cause of the influx included mistaken identity, a covert social experiment or Oxfordshire’s connection with Inspector Morse.

After analysing results of a Chinese-language questionnaire given to some tourists, the BBC found one of the reasons given by the Chinese visitors for stopping in Kidlington was ‘looking for the true sense’ of Britain.

However, an investigative journalist found that, in fact, Chinese tour operators charge $68 extra for Chinese-language tours of nearby Blenheim Palace, at Woodstock, the seat of the Dukes of Marlborough. Tourists who did not want to pay to visit Blenheim Palace were being dropped off in Kidlington, which they then found is a charming English village. But, in fact, the tour operators selected Kidlington because it is too far from Blenheim to allow their tourists to walk to Blenheim Palace and pay the cheaper £25 price for public tours in English.

Because of introductions through a family connection of my mother’s, I visited Blenheim Palace as a teenager around 1969 or 1970. I don’t know whether I’d be happy to pay $68 today, or even £25, for a guided tour. But I must make my way back soon to Kidlington, and to Bicester, for some more photographs … or simply to pay more attention to those paintings of Jerusalem by Alfred Daniels in Church House.

One of the painting of Jerusalem by Alfred Daniels in Church House, Kidlington (Photograph: Patrick Comerford, 2022)