‘They shackled his feet with fetters; his neck was ringed with iron’ (Psalm 105: 18) … the former prison cells in the Guildhall in Lichfield (Photograph: Patrick Comerford)

Psalm 105 is one of the longer psalms, and has 45 verses. It is sometimes known by its Latin name Confitemini Domino. In the slightly different numbering system in the Greek Septuagint and Latin Vulgate, this psalm is counted as Psalm 104.

Psalm 105 was probably written for a major festival, and verses 1-15 are largely reproduced in I Chronicles 16: 8-22, with just two slight differences in the wording of the parallel passages.

Originally the psalm began as it ends, with the words ‘Alleluia!’ or ‘Praise the Lord.’ The word Ἁλληλουιά (alleluia) precedes the opening verse in the Septuagint, where it has been transposed from verse 35 of the previous psalm.

Psalm 105 recalls the events in Israel’s history, from Abraham to the entry into the Promised Land, that show God’s fidelity to his covenant, culminating in the giving of the Law.

Verses 1-6 invite the people, the ‘children of Jacob’ and the descendants of Abraham (verse 6) – not just Joseph and his brothers, but all people in the community of faith – to worship God.

They are called on to give thanks for his deeds with joy and gratitude. God is to be praised for his judgments and for his wonderful works. (verses 1-4).

God’s judgments are for all people. He first promised the land to Abraham, confirmed it to Isaac and to Jacob, and made it part of an everlasting covenant. We are to search for God with all our strength, and to recall his great deeds (verses 5-6).

As they sing this psalm, however, the people are reminded that Joseph was sold into slavery, and that the people were afflicted by famine (verses 16-19). Yet, when Pharaoh set Joseph free, he became a wise teacher, and this is worth recalling and celebrating, for its shows God’s hand in history (verses 20-22).

In Jewish tradition, this Psalm is recited on the first day of Passover. Verses 8-10 are part of the prayers recited in the naming of a boy at his brit milah or circumcision, and verses 8-42 are repeated in the Amidah or principal prayer on New Year’s Day, Rosh Hashanah.

‘He sent darkness, and made the land dark; they rebelled against his words (Psalm 105: 28) … darkness falls on Dublin Castle (Photograph: Patrick Comerford, 2022)

1 O give thanks to the Lord, call on his name,
make known his deeds among the peoples.
2 Sing to him, sing praises to him;
tell of all his wonderful works.
3 Glory in his holy name;
let the hearts of those who seek the Lord rejoice.
4 Seek the Lord and his strength;
seek his presence continually.
5 Remember the wonderful works he has done,
his miracles, and the judgements he has uttered,
6 O offspring of his servant Abraham,
children of Jacob, his chosen ones.

7 He is the Lord our God;
his judgements are in all the earth.
8 He is mindful of his covenant for ever,
of the word that he commanded, for a thousand generations,
9 the covenant that he made with Abraham,
his sworn promise to Isaac,
10 which he confirmed to Jacob as a statute,
to Israel as an everlasting covenant,
11 saying, ‘To you I will give the land of Canaan
as your portion for an inheritance.’

12 When they were few in number,
of little account, and strangers in it,
13 wandering from nation to nation,
from one kingdom to another people,
14 he allowed no one to oppress them;
he rebuked kings on their account,
15 saying, ‘Do not touch my anointed ones;
do my prophets no harm.’

16 When he summoned famine against the land,
and broke every staff of bread,
17 he had sent a man ahead of them,
Joseph, who was sold as a slave.
18 His feet were hurt with fetters,
his neck was put in a collar of iron;
19 until what he had said came to pass,
the word of the Lord kept testing him.
20 The king sent and released him;
the ruler of the peoples set him free.
21 He made him lord of his house,
and ruler of all his possessions,
22 to instruct his officials at his pleasure,
and to teach his elders wisdom.

23 Then Israel came to Egypt;
Jacob lived as an alien in the land of Ham.
24 And the Lord made his people very fruitful,
and made them stronger than their foes,
25 whose hearts he then turned to hate his people,
to deal craftily with his servants.

26 He sent his servant Moses,
and Aaron whom he had chosen.
27 They performed his signs among them,
and miracles in the land of Ham.
28 He sent darkness, and made the land dark;
they rebelled against his words.
29 He turned their waters into blood,
and caused their fish to die.
30 Their land swarmed with frogs,
even in the chambers of their kings.
31 He spoke, and there came swarms of flies,
and gnats throughout their country.
32 He gave them hail for rain,
and lightning that flashed through their land.
33 He struck their vines and fig trees,
and shattered the trees of their country.
34 He spoke, and the locusts came,
and young locusts without number;
35 they devoured all the vegetation in their land,
and ate up the fruit of their ground.
36 He struck down all the firstborn in their land,
the first issue of all their strength.

37 Then he brought Israel out with silver and gold,
and there was no one among their tribes who stumbled.
38 Egypt was glad when they departed,
for dread of them had fallen upon it.
39 He spread a cloud for a covering,
and fire to give light by night.
40 They asked, and he brought quails,
and gave them food from heaven in abundance.
41 He opened the rock, and water gushed out;
it flowed through the desert like a river.
42 For he remembered his holy promise,
and Abraham, his servant.

43 So he brought his people out with joy,
his chosen ones with singing.
44 He gave them the lands of the nations,
and they took possession of the wealth of the peoples,
45 that they might keep his statutes
and observe his laws.
Praise the Lord!

The USPG Prayer Diary this morning (Wednesday 8 June 2022) invites us to pray: 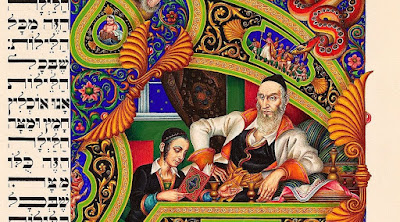 The Four Questions (Ma Nishtanah) from Arthur Szyk’s ‘Haggadah,’ Łódź (1935) … In Jewish tradition, Psalm 105 is recited on the first day of Passover