Anglicans in Helsinki find
‘an opportunity to put faith
into practice, an opportunity
to show love and compassion’

Amber Jackson from the diocese communications team in the Diocese of Europe and Patrick Comerford from USPG are visiting Anglican chaplaincies in Hungary and Finland to see how they are supporting Ukrainian refugees with funding from the joint Ukraine appeal.

In Helsinki, Patrick Comerford met the Revd Revd Tuomas Mäkipää, chaplain of Saint Nicholas’s, and heard how Anglicans in the Finnish capital are responding to the Ukrainian crisis

During my visit to Finland last week to see the response of the churches to the crisis in Ukraine, I was introduced to members of the Anglican congregation in Helsinki by the Revd Revd Tuomas Mäkipää, chaplain of Saint Nicholas’s congregation in the Finnish capital.

Saint Nicholas’s is a diverse and inclusive community, with people of many cultures, ages and nationalities joining together in worship and friendship. The services are in English and follow the liturgy of the Church of England, accompanied by choral music led by the music director and choir.

With assistance from the Anglican mission agency USPG (United Society Partners in the Gospel) and the Anglican Diocese in Europe, the small Anglican congregation in Helsinki is making a significant response to the needs of Ukrainian refugees.

The Revd Tuomas Mäkipää has been the Chaplain at Saint Nicholas since 2011. Originally from Pello in Finland, he is married to Suvi Mäkipää, and they are the parents of four children.

Saint Nicholas’s Chaplaincy supports the work of Vallila Centre through grants from USPG and the Diocese in Europe (Photograph: Patrick Comerford, 2023)

Over coffee near the harbour in Helsinki, the Revd Tuomas Mäkipää spoke of how a grant from USPG and the Diocese in Europe is helping to support Ukrainian refugees.

Since the beginning of the Russian invasion of Ukraine, there has been a steady flow of refugees from Ukraine to Finland. Many have seen some of the worst horrors of war. They are unable to travel by their own means and have no relatives or friends in Finland. Although the Finnish government has been active in its response, many refugees are still without money and are living in reception centres or as guests in private homes.

He recalls how Saint Nicholas’s Chaplaincy has been monitoring the situation carefully from the outset and shared information about where refugees could access help. It also supports the Vallila Centre, founded by the Ukrainian Association in Finland, with collections to provide refugees with food, clothes, basic hygiene products and advice.

The Vallila volunteers are working at full capacity, and the chaplaincy recognised the centre could do more if it had a full-time co-ordinator. He contacted USPG and a generous grant from USPG and the Diocese in Europe has enabled this. The chaplaincy is now hoping to support the centre to make the transition from being a ‘first response unit’ to a place that can offer long-term help.

He does not know when the present phase of the crisis is going to end or how it may change. But he emphasises the need to speak of hope and reconciliation. ‘Finish society needs to be more flexible and dynamic,’ he tells me.

Anja Haltia is a churchwarden as Saint Nicholas. ‘In Finland, so often we try to solve problems with money,’ she says. But the crisis has brought unexpected gifts to the fore in the congregation. ‘It is important to find God in the little things you do,’ she says.

Sarah Tahvanainen, a former RE teacher in England who studied theology at Trinity Hall, Cambridge, is the Administrator of Saint Nicholas. She sees the present crisis as ‘a gifted time’ and ‘an opportunity to put faith into practice, an opportunity to show love and compassion. It’s faith in action.’

‘People’s generosity inspires others,’ says Tuomas. He says the latest experience has transformed the mission and outlook of his church in Helsinki, and they are starting to learn the impact of what they are doing.

Saint Nicholas is based at Mikael Agricola Church in central Helsinki

The Anglican chaplaincy serves the greater Helsinki area and is an inclusive community of word and sacrament. It is part of the Diocese in Europe and under the Porvoo Agreement it works closely with the Evangelical Lutheran Church of Finland.

Saint Nicholas is based at Mikael Agricola Church in central Helsinki and is the ‘mother congregation’ of the Anglican Chaplaincy in Finland, led by the chaplain, the Revd Tuomas Mäkipää. Anglican services in English are also held in three other cities: Espoo, Tampere and Turku. Together we belong to the Church of England’s Diocese in Europe.

The Ukrainian crisis is only the latest crisis created by events in neighbouring Russia to shape the Anglican presence in Finland over the past century.

‘We’ve been here before,’ says Tuomas Mäkipää. ‘We want to help.’

The first recorded Anglican service in Finland took place 100 years ago in 1923, although it is possible that services were held before then. Records show the Anglican chaplain in St Petersburg making occasional visits to Helsinki to minister to English residents in the years before the Russian Revolution in 1917.

The Anglican Church in Finland and the Chaplaincy of Saint Nicholas in Helsinki were formed by people who fled from Saint Petersburg during the Russian Revolution. They settled first in Viipuri or Vyborg, but were then forced to flee further west again during the Winter War and stayed in Helsinki.

After the Russian Revolution, the chaplain at Moscow moved to Helsinki, where he was appointed to serve the British Legation. The Legation ceased to employ the chaplain in 1921, and after that chaplains were supported by voluntary contributions. At times, the chaplains in Helsinki also had pastoral responsibility for Anglicans in Russia, Estonia, Mongolia and China.

The first chaplain in Helsinki, the Revd Frank William North (1871-1925), had been chaplain in Moscow and St Petersburg and was arrested and interrogated by the Bolsheviks during the revolutionary period. He returned to Helsinki as chaplain, but died suddenly in 1925.

His successor, the Revd Clement H Jones, was the Anglican chaplain both before (1925-1936) and after (1954-1956). Other Anglican chaplains in Helsinki included Henry Isherwood (1951-1954), who later became Assistant Bishop in Diocese of Gibraltar, John Richard Satterthwaite (1956-1957), later Bishop of the Diocese in Europe, and the Revd Rupert Robert James Moreton (1998-2011), who has also served in the Church of Ireland.

In Helsinki in the past, the Eucharist was celebrated in the chaplain’s personal flat, and also in a chapel beside Helsinki Lutheran Cathedral. Today, the congregation of Saint Nicholas’s worships at Mikael Agricola Church, a Lutheran church in the Punavuori district of Helsinki. The church was designed by Lars Sonck and built in 1933-1935. It is named after Mikael Agricola (1510-1557), a 16th century Bishop of Turku. He translated the New Testament into Finnish, produced the prayer book and hymns for the Church of Finland, and is often called the ‘father of literary Finnish.’

The Sung Eucharist is celebrated on Sundays at 10 am. There is a vibrant Sunday School and youth group that meet regularly on Sunday mornings and help to lead the monthly all-age services. Other services include monthly All-Age Services and Evensongs. 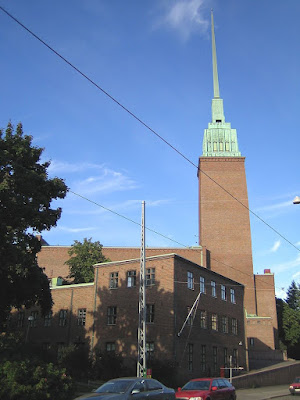 Mikael Agricola Church in central Helsinki, where Saint Nicholas’s is the ‘mother congregation’ of the Anglican Chaplaincy in Finland (Photograph: Wikipedia/CCL)