‘Whoever saves a life has saved the entire world’ 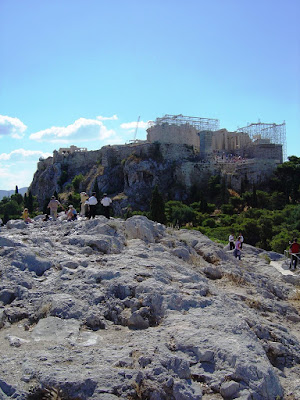 The Areopagus, beneath the slopes of the Acropolis in Athens (Photograph: Patrick Comerford) 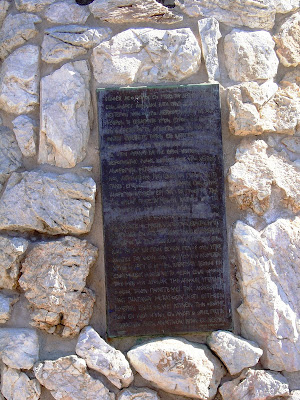 Acts 17: 22-31 ... the Apostle Paul's sermon at the Areopagus in Athens (Photograph: Patrick Comerford)

May I speak to you in the name of the + Father, and of the Son and of the Holy Spirit, Amen

If the truth were to be told, many Christians find it difficult to live a life that is truly Trinitarian.

We may think we understand our relationship with God the Father, the Creator of Heaven and Earth.

We may think we have an even clearer understanding of our relationship with God the Son … after all, we know every last detail of his biography; his CV has been the subject of every Sunday School and Confirmation class we attended; his CV fills and shapes our Church Calendar and the stained glass windows of our parish churches.

But what about the Holy Spirit?

If we were to ask most people, they probably think of the Holy Spirit as some invisible appendix of God the Father and God the Son, something or someone that comes down at Pentecost; perhaps, that gave us gifts at confirmation; but something or someone best not talked about too much in case someone thinks we are too enthusiastic about Christianity, about religion.

We become uncomfortable about the Holy Spirit when we think about enthusiastic and uncontrolled expressions of charismatic Pentecostalism.

Our access to thinking about God the Holy Spirit is made more difficult when we think about the images of the Holy Spirit provided in the traditions of Christian art: a dove that is shown in paintings and stained-glass windows that looks a lot like a homing pigeon; or tongues of fire dancing around the meekly-bowed heads of people cowering together as they hide in a room.

We think, perhaps, that it is best to leave sermons about the Holy Spirit to the Day of Pentecost, or to a once-a-year Confirmation service, and let the rest of us get on for the rest of the year with God being God the Father or God the Son.

But the Holy Spirit is not something added on as an extra course, as an after-thought after the Resurrection and Ascension.

I am a regular blogger. My sons worry that my friends may think I’m a bit of a “Geek.”

I post on the internet, on average, every day, or every second day. But I really am not a geek. All I post is my lecture notes, my sermons, and some rambling thoughts about walking on the beach, or about travelling and local history, or about my love of music and poetry.

It takes very little extra work. I still have to write up my notes for lectures and sermons. And I have very little way of knowing whether these notes and ramblings have any impact once they go out into cyberspace.

I wrote how Julian’s positive outlook does not come from ignoring suffering or being blind to it, but arises from the clarity she attained as she struggled with her own questions. This struggle gave her the ability to see beyond her own pain and suffering and to look into the compassionate face of God. Only this gazing could reassure her that – despite pain, and sorrow – in God’s own time, “all shall be well.”

Almost immediately, a former work colleague rang to know if I was all right. He offered a friendly ear, and his response was comforting and consoling.

Over the years, there have been some other responses to this posting. Then, 10 days ago, an anonymous reader posted, saying: “Thank you for this gift. [I r]eceived very difficult news this past week and kept looking for a silver lining – some way to give thanks to God for what has happened in my life … In reading the words ‘All shall be well . . .’ was a great reminder of the hope that Christ gives us and as well, that Christ is with us each second of the day. Thank you again for the reminder of ‘God with us’ no matter what.”

It was a response out of the blue, and after three years it put my own difficulties then in perspective. Three years later someone else found comfort in my own reflections on my own sorrows.

I don’t know who this person is, or where she lives. All I know is she is a chaplain.

But if this was the only blog-post that I had a response to, if this was the only reader I had for the past three years, then all the other blog-posts had been worth it. We cannot control, quantify or restrict the way in which the Holy Spirit uses or values our work, or uses us to work with others. And for most of the time, we’re better off not knowing.

But I was sharing this experience with some colleagues this week. And I was reminded of a saying in the Talmud – one of the most sacred texts of ancient Judaism: “Whoever saves a life, it is considered as if he saved an entire world.” [Jerusalem Talmud, Sanhedrin 4: 1 (22a); Babylonian Talmud, Sanhedrin 37a.]

It is a saying found throughout Rabbinic literature, that is repeated in the Quran, and that inspired Oskar Schindler, the hero of the movie Schindler’s List.

I was sharing this story a few nights ago over dinner with some clerical colleagues and friends.

One told me of a man who had turned up in his church for a quiet mid-day service. The man is now in his mid-40s, and was visiting Ireland on a business trip. He had often visited churches and cathedrals, but had never before been so moved as he was by this mid-day Eucharist. He approached my friend afterwards and asked for a quiet moment.

He wanted to be baptised ... there and then.

My friend asked him to wait, to come back in an hour or two. And he did. Two parishioners stood as sponsors or godparents. The whole thing was over in ten or 15 minutes. The man rang his wife full of joy. He felt he had arrived where he ought to be. Outwardly, he was full of joy. Inwardly, he had arrived, he was at home, he had found his peace with God.

What had happened? The Holy Spirit had moved, and he had responded.

“Whoever saves a life, it is considered as if he saved an entire world.” 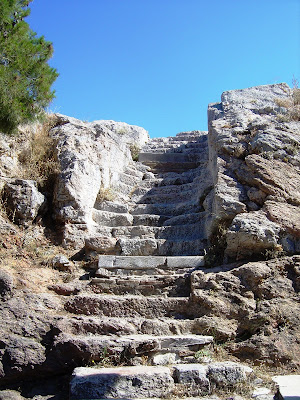 ‘He himself gives to all mortals life and breath and all things’ ... the steps up the Areopgaus in Athens (Photograph: Patrick Comerford)

This is what the Apostle Paul is saying at the Areopagus in Athens in our reading from the Acts of the Apostles this morning. The people who worshipped the unknown God on the slopes beneath the shadow of the Acropolis could be assured that God had heard their prayers, and they were now being invited to join in communion with him through Paul’s proclamation.

And, because the Resurrection breaks through all the barriers of time and space, the Apostle Peter tells us this morning that even in death Christ brought the good news to those who died before the Incarnation: “also he went and made a proclamation to the spirits in prison.”

And as a sign or a token of this, as a promise of this, Christ says in our Gospel reading this morning that he is asking “the Father, and he will give you another Advocate, to be with you for ever. This is the Spirit of truth, whom the world cannot receive, because it neither sees him nor knows him. You know him, because he abides with you, and he will be in you.”

If you know the Spirit, and the Spirit abides in you, how would you let others know?

If the Holy Spirit is the Advocate and is living in you, then who are you an advocate for?

Who are you, in your own small, quiet, undramatic way, a little Oskar Schindler for?

Don’t put down or dismiss the small efforts to make this a better world. “Whoever saves a life, it is considered as if he saved an entire world.”

Gandhi once said: “Be the change you want to see in the world.” And he also said: “Only he who is foolish enough to believe that he can change the world, really changes it.”

And so may all we think, say, and do, be to the praise, honour and glory of God, + Father, Son, and Holy Spirit, Amen. 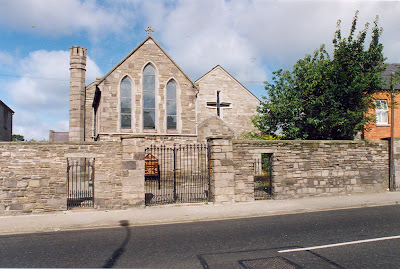 God our redeemer,
you have delivered us from the power of darkness
and brought us into the kingdom of your Son:
Grant, that as by his death he has recalled us to life,
so by his continual presence in us he may raise us to eternal joy;
through Jesus Christ our Lord. Amen.

God our Father,
whose Son Jesus Christ gives the water of eternal life:
May we also thirst for you,
the spring of life and source of goodness,
through him who is alive and reigns with you
and the Holy Spirit,
one God, now and for ever. Amen.

This post was very meaningful to me. I discussed it with my wife before service this morning. We meditated on how the Holy Spirit moves our being in manners we cannot foresee. Thank you for sharing. Philip+