Summer comes to Bray ... at least for a day 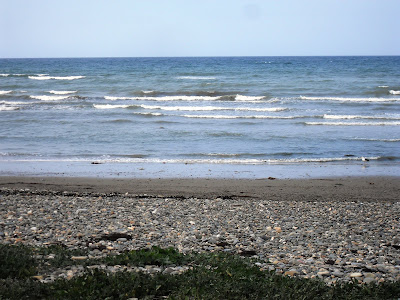 The waves were beginning to get choppy at the end of the day today in Bray (Photograph: Patrick Comerford, 2011)

This is the first bank holiday weekend of the summer.

But Whit or no Whit, summer has started, and Bray, Co Wicklow, was packed this afternoon with day-trippers, enjoying the sunshine and the beach.

After drafting an address for a memorial service next Saturday, I had spent a few hours on the terrace in the back garden enjoying the sunshine. By the time I got to Bray in the late afternoon, the sun had lost much of its heat, clouds were beginning to form, and the waves along the shoreline were a little choppy. But it was still bright, and it was a good afternoon for a stroll.

Two of us stopped first to buy some real Italian ice-cream at the small shop-front ice creamgelateria beside the former Palazzo restaurant on Strand Road, opposite Sea Life and the Beach House.

I’m sorry Palazzo has closed for business, it was a great place for both lunch and dinner, had a good wine selection and the walls were decorated with some interesting paintings for sale.

But the ice cream parlour is a delight, and a notice on the restaurant door promises that it is soon to reopen under the same management as Campo de’ Fiori around the corner in Albert Avenue.

That’s promising indeed because Laura and Marco Roccasalvo have an enthusiasm for good Italian food.Campo de’ Fiori takes its name from a square in Rome with an important flower market 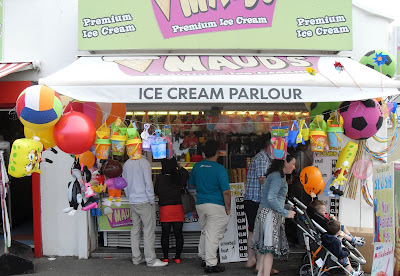 The sunshine brought a lot of visitors to Bray this afternoon (Photograph: Patrick Comerford, 2011)

With our ice creams, we strolled south along the Promenade as far as the Bray Head Hotel, which looks as if it’s in a very sorry state indeed. Then we strolled back alongside the cheap-and-cheerful shops selling ice creams, sweets and burgers – the warm sunshine really had brought a lot of people to Bray this afternoon.

In the side-streets, we bumped into a former colleague from The Irish Times, and then past the Dart station we took a look at the terrace of houses in Royal Marine Terrace, beyond the Hibernia Inn. 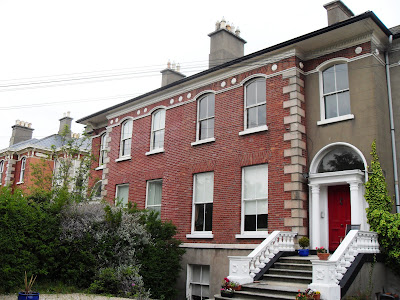 This terrace of semi-detached, three-bay two-storey over basement houses was built in 1862. To the front or west side, the houses are accessed through a short, private cul-de-sac. These are well-preserved, mid-19th-century houses, with an imposing design and setting that add to the 19th-century character and streetscape of Bray’s promenade. It is unusual in that they should face a private cul-de-sac and have a very public elevation to the promenade. Backing onto Strand Road, the houses have views out to the east and the sea from the rear, but the private access means most people only see the rear-view of the houses.

The houses are built in brick with moulded quoins, rusticated render to the basement level and a moulded string course above the second floor window openings to the front. Each house has a short flight of stone steps rise to the panelled front doors which have free-standing columns, which along with respondent pilasters, support projecting cornices.

Over the doors there are fanlights, all set within semi-circular-headed openings in slightly recessed bays.

Window openings are a mixture of flat-headed and segmental-headed with either one over one or two over two timber sash frames. To the rear (east) there are canted three-storey bays, as the houses are set on a slight rise with the rears overlooking the promenade.

Having looked at Martello Terrace about two weeks ago, this was another architectural delight to find in Bray. And I had enjoyed my walk on the beach.

By the time we got back to the car, it was getting a little chilly, and it seemed most of the day-trippers were heading home too.
Posted by Patrick Comerford at 20:50