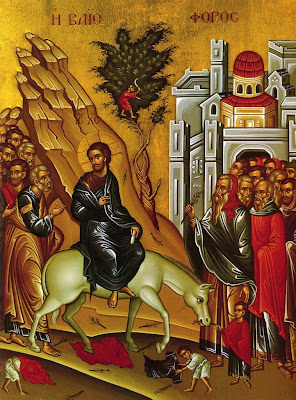 Christ’s Entry into Jerusalem on Palm Sunday ... a modern icon

My Poem for Lent today on this Palm Sunday morning is ‘The Donkey’ by Gilbert Keith Chesterton (1874-1936), an English writer, journalist, critic and poet who was well-known for his reasoned apologetics.

Chesterton’s biographers have identified him as a successor to Victorian authors such as Matthew Arnold, Thomas Carlyle, John Henry Newman and John Ruskin. He routinely referred to himself as an orthodox Christian, and came to identify himself more and more with Catholicism, eventually moving from High Church Anglicanism to Roman Catholicism in 1922.

Chesterton was born in Campden Hill in London, and was educated at Saint Paul’s School, the Slade School of Art and University College London.

At first he hoped to become an artist but eventually became a journalist, writer, critic and poet. One of his memorable fictional characters is Father Brown.

His circle of friends included the Dublin-born playwright George Bernard Shaw, PG Wodehouse, HG Wells and Bertrand Russell. In the middle of his epic poem, ‘The Ballad of the White Horse,’ he famously states:

For the great Gaels of Ireland
Are the men that God made mad,
For all their wars are merry,
And all their songs are sad.

He died in 1936 in Beaconsfield, Buckinghamshire, and his Requiem Mass took place in Westminster Cathedral. 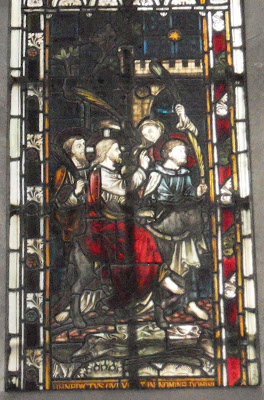 The donkey serves as literary device to link birth and death, Christmas and Easter, We often think of the donkey as the lowly, humble, unattractive beast of burden who carries Christ into Jerusalem on Palm Sunday. But the Christ Child also rode on a donkey when he was carried in the womb by his mother, the Virgin Mary, to Bethlehem before his birth.

However, this poem points us, not so much to the donkey, but to our “Beast of Burden,” Christ, who carried the burden that no one else could bear – the sins of the world. Christ looked even more “monstrous” than the donkey (Isaiah 52: 14), he was “starved, scourged, derided,” four times in the Gospels he was “dumb,” but his hour of glory came on the cross.

Is the donkey too hard on himself? But then, most us may be too hard on ourselves. If the lowly beast of burden becomes a bearer of the King, then surely Christ can see through the ways our perceptions of our own worth and understanding are at times awry and distorted.

On this day, 1 April, it might be too easy to think of the donkey as foolish. The donkey may be derided as a stupid animal, yet he is used by God for the most triumphal journey in history, highlighting the difference between God’s wisdom and ours. No matter how humble or crushed in spirit we may feel, we are all God’s beloved children and we are all capable of being raised in glory.

Nobody is truly worthless, no matter what others may think. Just as the donkey is an unsung, unloved and unattractive creature who becomes the hero in Chesterton’s poem, so too the most humble and unattractive people, even though they are without social connections or the appearance of being important, are seen by Christ as who they truly are, made in God’s image and likeness.

The donkey remains dumb and does not declare his moment of greatness to those who deride him. Instead, his experience is an internal knowledge of his true value.

The image of the donkey in his moment of glory carrying Christ speaks of the intrinsic worth of every human, and the glory of every human soul in God’s love. In God’s eyes, we all deserve palms before our feet. 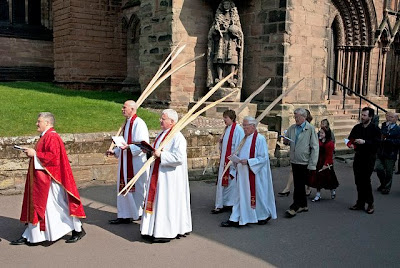 The Donkey, by GK Chesterton

When fishes flew and forests walked,
And figs grew upon thorn,
Some moment when the moon was blood,
Then surely I was born.

With monstrous head and sickening cry,
And ears like errant wings,
The devil’s walking parody
Of all four-footed things.

The tattered outlaw of the earth,
Of ancient, crooked will;
Starve, scourge, deride me: I am dumb,
I keep my secret still.

Fools! For I also had my hour;
One far fierce hours and sweet:
There was a shout about my ears,
And palms before my feet. 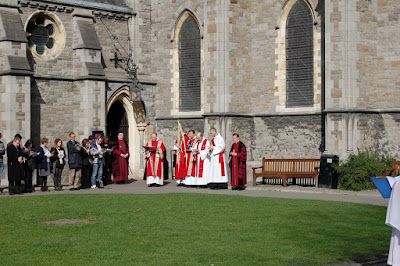 Palm Sunday 2010 at Christ Church Cathedral ... the Blessing of the Palms

This was not by far the first time God used animals, and donkeys in particular, to carry out his plan.
One of the most beautiful and moving poems ever written!