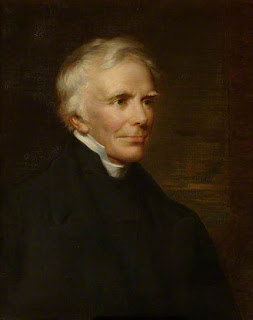 John Keble (1792-1866) was an Anglican priest and poet, Professor of Poetry at Oxford, and one of the leaders of the Oxford Movement. He was born on Saint Mark’s Day, 25 April 1792, in Fairford, Gloucestershire, where his father, the Revd John Keble, a former Fellow of Corpus Christi College, Oxford, was Vicar of Coln St Aldwyn’s.

John Keble received his early education in his father’s vicarage, and at 14 he won a scholarship to Oxford University. He studied at Corpus Christi College, Oxford, and in 1810, at the age of 18, he graduated with a double first in classics and mathematics.

In 1811, he became a Fellow of Oriel College, Oxford, and for some years, he was a tutor and examiner in the University of Oxford. While he was at Oxford, he was ordained deacon by the Bishop of Oxford on Trinity Sunday 1815, and priest in 1816.

He became first a curate to his father, and then curate of Saint Michael’s and Saint Martin's Church, Eastleach Martin, in Gloucestershire.

In 1827, he published The Christian Year, which appeared in 1827. He wrote the poems to restore a deep feeling for the Church Year among Anglicans, and it received such great acclaim that its became the most popular volume of verse in the 19th century. One of the most popular poems in The Christian Year is the well-known hymn, ‘New every morning,’ with its opening lines:

New ev’ry morning is the love
Our wakening and uprising prove:
Through sleep and darkness safely brought,
Restored to life and power and thought.

The Christian Year went into 95 editions in his lifetime, and b the time the copyright expired in 1873, over 375,000 copies had been sold in Britain and 158 editions had been published.

The success of The Christian Year led to Keble being appointed Professor of Poetry in Oxford University, a post he held from 1831 to 1841.

In the 1830s, Parliament legislated to abolish ten bishoprics in the Church of Ireland. Keble vigorously attacked this legislation for undermining the independence of the Church, and two years after becoming Professor of Poetry, he preached his famous Assize Sermon on “national apostasy.”

The text of the sermon was I Samuel 12: 23, “As for me, God forbid that I should sin against the Lord in ceasing to pray for you; but I will teach you the good and the right way.”

This sermon in Saint Mary’s University Church in 1833 was the spark that ignited the Oxford Movement. The members of the Oxford Movement began to publish a series, Tracts for the Times, that gave them the popular name “Tractarians.” These tracts sought to recall the Church to its ancient sacramental heritage.

John Henry Newman was the intellectual leader of the movement, Edward Bouverie Pusey was the prophet of its devotional life, and John Keble was its pastoral inspiration.

However, Keble’s passionate desire was to be a faithful parish priest, finding fulfilment in the daily services, confirmation classes, visiting the village schools, and corresponding with those seeking spiritual counsel. In 1835 he was appointed Vicar of Hursley, Hampshire, where he settled down to family life and remained for the rest of his life as a parish priest at All Saints’ Church.

In 1836, he edited an edition of Richard Hooker’s works with critical notes, and he also wrote a Life of Bishop Wilson for the Library of Anglo-Catholic Theology.

The most important of his prose writings, however, was his treatise on Eucharistic Adoration, was written in support of Archdeacon Denison, who had been attacked for two sermons preached in Wells Cathedral in which he stated that the Body and Blood of Christ are received by those who eat and drink unworthily, and that worship is due to the real though invisible presence of the Body and Blood of Christ in the Holy Eucharist under the forms of bread and wine.

On refusing to retract these statements, Archdeacon Denison was deprived of his vicarage and archdeaconry, but this sentence was overthrown by the Judicial Committee of the Privy Council in 1858. Keble had published his treatise in the previous year, after the sentence of deprivation had been pronounced.

John Keble died on 29 March 1866 at the age of 74, and was buried at Hursley on 6 April. After his death, 12 volumes of his sermons were published by Pusey and other friends. Pusey said of these that their chief characteristics are affectionate simplicity and intense reality.


Within three years of his death, Keble College was established at Oxford “to give an education in strict ﬁdelity to the Church of England.” For Keble, this would have meant dedication to learning in order “to live more nearly as we pray.”

However, because today [29 March 2013] is Good Friday, few parishes are likely to recall John Keble today. Yet today is a suitable day for reading once again one of his poems in The Christian Year, ‘Good Friday’:

Is it not strange, the darkest hour
That ever dawned on sinful earth
Should touch the heart with softer power
For comfort than an angel’s mirth?
That to the Cross the mourner’s eye should turn
Sooner than where the stars of Christmas burn?

Sooner than where the Easter sun
Shines glorious on yon open grave,
And to and fro the tidings run,
“Who died to heal, is risen to save?”
Sooner than where upon the Saviour’s friends
The very Comforter in light and love descends?

Yet so it is: for duly there
The bitter herbs of earth are set,
Till tempered by the Saviour’s prayer,
And with the Saviour’s life-blood wet,
They turn to sweetness, and drop holy balm,
Soft as imprisoned martyr’s deathbed calm.

All turn to sweet – but most of all
That bitterest to the lip of pride,
When hopes presumptuous fade and fall,
Or Friendship scorns us, duly tried,
Or Love, the flower that closes up for fear
When rude and selfish spirits breathe too near.

Then like a long-forgotten strain
Comes sweeping o’er the heart forlorn
What sunshine hours had taught in vain
Of JESUS suffering shame and scorn,
As in all lowly hearts he suffers still,
While we triumphant ride and have the world at will.

His pierced hands in vain would hide
His face from rude reproachful gaze,
His ears are open to abide
The wildest storm the tongue can raise,
He who with one rough word, some early day,
Their idol world and them shall sweep for aye away.

But we by Fancy may assuage
The festering sore by Fancy made,
Down in some lonely hermitage
Like wounded pilgrims safely laid,
Where gentlest breezes whisper souls distressed,
That Love yet lives, and Patience shall find rest.

O! shame beyond the bitterest thought
That evil spirit ever framed,
That sinners know what Jesus wrought,
Yet feel their haughty hearts untamed –
souls in refuge, holding by the Cross,
Should wince and fret at this world’s little loss.

Lord of my heart, by Thy last cry,
Let not Thy blood on earth be spent –
Lo, at Thy feet I fainting lie,
Mine eyes upon Thy wounds are bent,
Upon Thy streaming wounds my weary eyes
Wait like the parched earth on April skies.

Wash me, and dry these bitter tears,
O let my heart no further roam,
’Tis Thine by vows, and hopes, and fears.
Long since – O call Thy wanderer home;
To that dear home, safe in Thy wounded side,
Where only broken hearts their sin and shame may hide.

Grant, O God, that in all time of our testing we may know your presence and obey your will; that, following the example of your servant John Keble, we may accomplish with integrity and courage what you give us to do, and endure what you give us to bear; through Jesus Christ our Lord, who lives and reigns with you and the Holy Spirit, one God, for ever and ever. Amen.