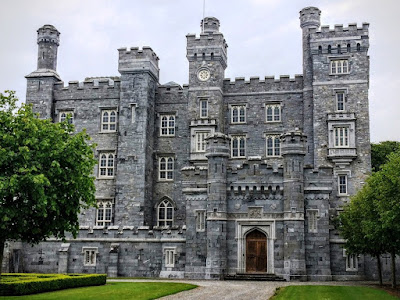 Killeen Castle near Dunsany, Co Meath … there has been a castle on the site for almost 850 years (Photograph: Patrick Comerford, 2015)

I stopped to see two of the great mediaeval castles of Co Meath, and one late mediaeval wayside cross on my way to the Station House Hotel in Kilmessan yesterday afternoon [12 June 2015].

Killeen Castle and Dunsany Castle are a pair of neighbouring castles on either side of what was once a major mediaeval roadway, and both are associated with the Plunkett family, once a powerful family in the area.

Killeen Castle near Dunsany stands on a site where there has been a castle for almost 850 years, since about 1172. The present castle is the restoration of a largely 19th century castle that suffered severe fire damage in 1981.

The first castle at Killeen may have been a Norman wooden fortification oden, built for the de Lacy magnates, and held from 1172 by the Cusack family. The first stone castle was built by Geoffrey de Cusack around 1181. 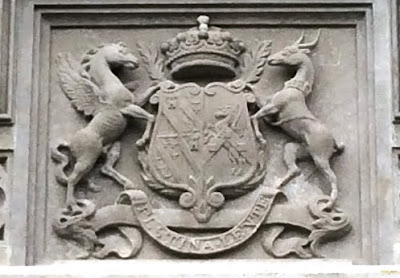 The coat-of-arms of the Earls of Fingall over the main doorway of Killeen Castle (Photograph: Patrick Comerford, 2015)

Killeen Castle passed to the Plunkett family in 1399 through the marriage of Lady Joan de Cusack and Christopher Plunkett of Rathregan, who became the first Baron of Killeen in 1426. He divided his estate between his eldest two sons, the second son taking Dunsany Castle, and later becoming the first Lord Dunsany while the elder branch of the family continued as Barons of Killeen, and later Earls of Fingall.

Killeen Castle was developed over time, and by the 15th century it was a mid-size fortified tower house.

The Killeen and Dunsany branches of the Plunkett family remained close through the centuries and it is said that at one time the Dunsany branch held Killeen in trust for the elder branch.

Luke Plunkett, 10th Lord Killeen, was given title of Earl of Fingall in 1628. It is said he negotiated and bought the earldom for £2,700 during a visit to London that year. His first wife, Lady Elizabeth O’Donnell, was a daughter of Rory O’Donnell, 1st Earl of Tyrconnel, and a niece of Red Hugh O’Donnell.

However, Killeen Castle fell into disrepair in the late 17th century. It was leased out, and was not restored until around 1779, when parts of the demesne were landscaped and some of the estate features were added. 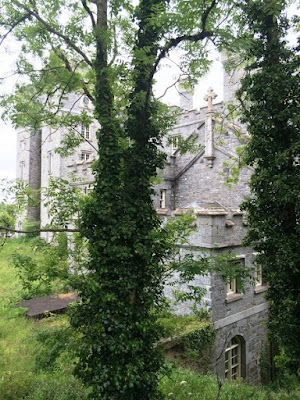 Killeen Castle was rebuilt over 200 years ago, and remodelled on Windsor Castle (Photograph: Patrick Comerford, 2015)

Significant reworking was carried out between 1803 and 1813 under the supervision of the Gothic revival architect Francis Johnston. The 8th Earl of Fingall was also given a British peerage title as Baron Fingall in 1831.

In 1841, much of Killeen Castle was demolished and rebuilt (using much existing material) by the 9th Earl of Fingall, supposedly as a small Windsor Castle. The two towers he added are inscribed with the the dates 1181 and 1841, and when the rebuilt castle was completed it was said that Killeen Castle had 365 windows, one for each day of the year. 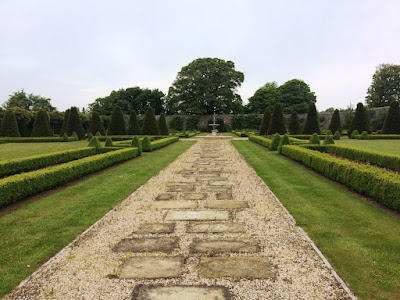 In the walled garden of Killeen Castle (Photograph: Patrick Comerford, 2015)


The 12th and last Earl of Fingall sold Killeen Castle and the estate in 1951, to Sir Victor Sassoon (1881-1961). But Lord Fingall stayed on as the manager of the stud farm established near the castle. In 1953, the Earl and Countess of Fingall moved to a modern house built on the lands, and most of the contents of the house were sold too.

Sir Victor Sassoon, who was born in Naples, was a member of, a Baghdadi Jewish family who had made their fortune in the opium trade and Indian cotton. He had vast merchant and banking interests in Bombay, Poona, Baghdad, Shanghai, Hong Kong, Japan and the Bahamas, and at one time owned over 1,800 properties in Shanghai.

Sassoon died in 1961 and his heirs sold the estate in 1963 to Daniel Wildenstein, a French art dealer and racehorse owner.

When the last earl died in 1984 he was buried nearby at Dunsany Church. At his death all three titles in his branch of the Plunkett family died out. 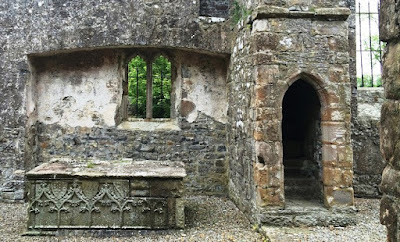 Inside Killeen Church … the graves may be those of the Plunketts of Killeen Castle (Photograph: Patrick Comerford, 2015)

Meanwhile, Killeen Castle and estate were sold in 1978 to the advertiser Basil Brindley, who continued to run the stud farm operation. On 16 May 1981, the castle was destroyed in an arson attack, and was left abandoned for many years. The lands and buildings were sold again in 1989 to Christopher Slattery, who initiated new development plans.

In 1989, a new development plan was put forward, and an 18-hole championship golf course designed by Jack Nicklaus opened in 2008.

Behind the castle and the golf club stand the ruins of Killeen Church, known locally as Killeen Abbey. The church, dedicated to the Blessed Virgin Mary, was built in the Gothic style around 1425, and is a National Monument, but it was locked on Friday afternoon and it was not possible gain access. 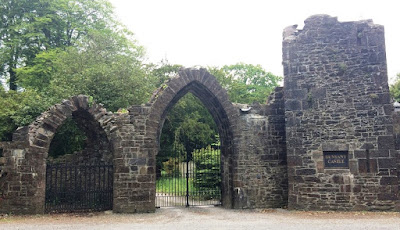 The entrance to Dunsany Castle … it has the appearance of a Gothic ruin, but this is a sham (Photograph: Patrick Comerford, 2015)

From Killeen Castle, I continued on to the entrances to neighbouring Dunsany Castle. The original Dunsany Castle was built in 1180 or 1181 by Hugh de Lacy. The castle was built to replace earlier motte fortifications, and it claims to be the oldest home in continuous occupation in Ireland, having been held by the Cusack and Plunkett families, to the present day.

The Dunsany branch of the Plunkett family enjoyed almost uninterrupted ownership of Dunsany Castle, apart from the Cromwellian period, when they were sent into exile in Connaught.

The Dunsany Estate was reduced in size under the terms of Land Acts passed in the late 19th and early 20th century. But the castle is still surrounded by its original demesne, and other estate lands remain around the district. Much of the work of the writer Lord Dunsany was done at the Castle, notably in a room in one of the castle towers.

The demesne is surrounded by a drystone wall, much of which was built during the Great Famine as a relief work.

The main entrance to the grounds today, opposite a mediaeval pilgrim cross, has the appearance of a Gothic ruin but this is a sham, concealing a residential gate lodge, and with a solid black metal gate. Just behind this is the former Steward’s House. 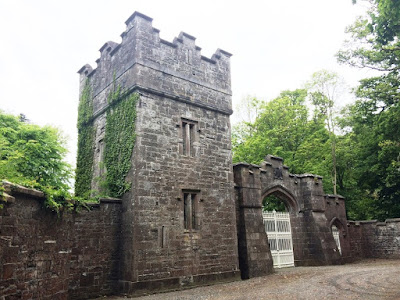 The former main gateway, leading to a long avenue which abruptly reveals the castle to arrivals, has a tower lodge and high white gates. 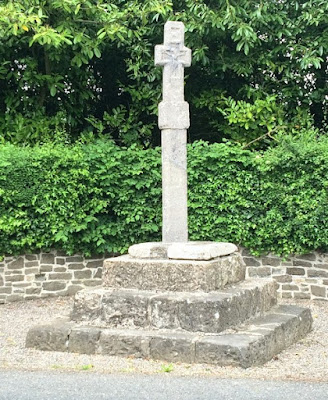 Although Dunsany Castle is supposed to be open to visitors in the summer months, there was no entrance sign. Instead, I was able to spend some time admiring Dunsany Wayside Cross, a late 16th or early 17th century decorated cross opposite the gateway. This is one of a small number of Wayside Crosses in Co Meath that have survived from the later mediaeval period.

The cross is carved from limestone and has a rectangular shaft set in a large rectangular base with the upper shaft of the cross set in a collar. The cross is Latin style. On the west face is a panel with the winged ox of Saint Luke above a crucifixion. There is no inscription, but it was probably erected to commemorate one of the Plunketts of Dunsany Castle. 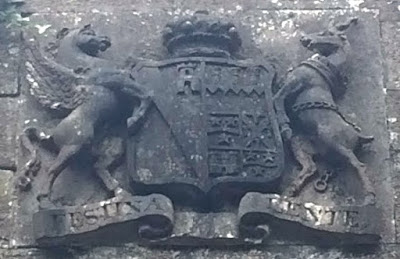 The coat-of-arms of Lord Dunsany at the main entrance gate to Dunsany Castle (Photograph: Patrick Comerford, 2015)

Edward Plunkett (1713-1781), 12th Lord Dunsany, conformed to the Church of Ireland never took the steps needed to take his seat in the Irish House of Lords. John William Plunkett (1853-1899), 17th Lord Dunsany was a Conservative MP for Gloucestershire South, while his brother, Horace Plunkett, was a key figure in the development of Irish agriculture and the Irish co-operative movement.

Edward John Moreton Drax Plunkett, 18th Lord Dunsany (1878-1957) was a writer and dramatist who published more than 80 books, as well as short stories, plays, novels and essays. He worked closely with WB Yeats, whose 150th birthday is being celebrated throughout Ireland today [13 June 2015] and Lady Gregory, received an honorary doctorate from Trinity College, Dublin, and was chess and pistol-shooting champion of Ireland.

Today, the title is held by Randal Plunkett, 21st Baron of Dunsany, who succeeded in 2011, and continues to live at Dunsany Castle.

From the gates of Dunsany Castle, we drove on to the Station House Hotel in Kilmessan. There was more of mediaeval Meath to see later in the weekend. 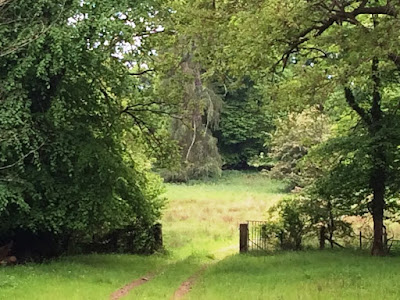 The Dunsany estate, seen through the gates of Dunsany Castle (Photograph: Patrick Comerford, 2015)