Reading ‘The Sicilian Vespers’
once again … in Sicily 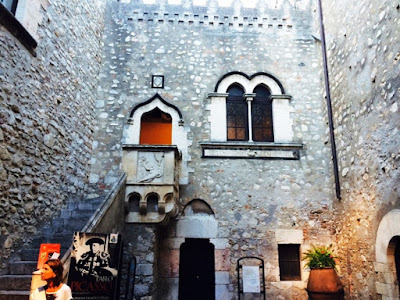 The Palazzo Corvajo in Taormina … the Sicilian Parliament met here in 1410, ending the War of the Sicilian Verspers (Photograph: Patrick Comerford, 2015)

Listening to the bells of the cathedrals in Taormina, Suracuse or Noto during this week in Sicily, or visiting the Palazzo Corvajo in Taormina, I am reminded of the Sicilian Vespers (Vespri Siciliani) and the slaughter associated with it – a story I first read about in detail in the magisterial book of the same name by the late Steven Runciman (1903-2000), one of the greatest Byzantine scholars.

The Sicilian Vespers is the name given to a popular revolt that broke throughout Sicily in Easter 1282 against the rule of the French-born king, Charles of Anjou, who had ruled Sicily since 1266. Within six weeks, 3,000 French men and women and Charles I and his Angevin government lost control. It was the beginning of the War of the Sicilian Vespers.

The rising had its origin in the struggle over the control of Sicily between the House of Hohenstaufen, which then ruled Germany, and the Papacy and the Papal States. In 1245, Pope Innocent IV tried to depose the Emperor Frederick II. In 1255, Sicily was seized by Frederick’s illegitimate son, Manfred, who ruled from 1258 to 1266.

Both Pope Urban IV and Pope Clement IV excommunicated Manfred and then tried to depose him. At first the crown of Sicily was sold by the Pope to Henry III of England, who accepted it on behalf of his eight-year-old son, Edmund ‘Crouchback’ or Edmund of Lancaster (1245-1296), who was styled “King of Sicily” for ten years.

But in those ten years, England never paid any rent to the Pope, and “King Edmund” never set foot on Sicily. Urban IV then deposed Edmund, and made Charles of Anjou (1227-1285) the King of Sicily, on condition that he paid the accumulated English debts to the Pope.

Charles, who was the younger brother of King Louis IX of France, imposed heavy, punitive taxes on the people of Sicily to pay the debt he had acquired. But he was even more ambitious than many realised, and had plans to capture Constantinople and to overthrow of the Emperor of Byzantium, Michael VIII Palaeologus.

But Sicily was never a happy part of the Angevin empire, the resident nobility had no voice in government and heavy taxes were imposed on the island to pay for Charles’s wars outside Sicily.

Byzantine agents in Sicily worked to undermine Charles’s plans and projects, and found a voice in Manfred’s son-in-law, King Peter III of Aragon, who regarded his wife Constance as the rightful heir to the throne of Sicilian throne.

The revolt known as the Sicilian Vespers began when the bells rang out in the Church of the Holy Spirit, Palermo, at the start of Vespers, the sunset prayers on Easter Monday, 30 March 1282.

According to Runciman, the Sicilians at church that evening were taking part in the holiday festivities when a group of French officials came in and began to drink. A sergeant named Drouet dragged a young married woman from the crowd, pestering her with his advances. Her husband attacked Drouet with a knife and killed him. When the other Frenchmen tried to avenge their comrade, the Sicilian crowd fell upon them, killing them all. At that moment all the church bells in Palermo began to ring for Vespers. 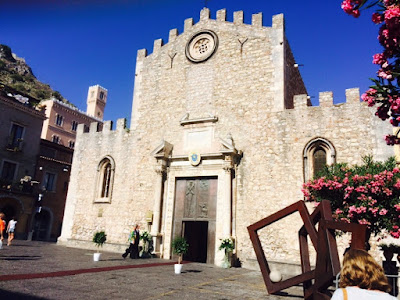 The Cathedral or Duomo in the centre of Taormina (Photograph: Patrick Comerford, 2015)

Runciman describes the mood of the night:

To the sound of the bells, messengers ran through the city calling on the men of Palermo to rise against the oppressor. At once the streets were filled with angry armed men, crying “Death to the French” (“moranu li Franchiski” in their Sicilian dialect). Every Frenchman they met was struck down. They poured into the inns frequented by the French and the houses where they dwelt, sparing neither man, woman nor child. Sicilian girls who had married Frenchmen perished with their husbands. The rioters broke into the Dominican and Franciscan convents; and all the foreign friars were dragged out and told to pronounce the word “ciciri,” whose sound the French tongue could never accurately reproduce. Anyone who failed the test was slain … By the next morning some two thousand French men and women lay dead; and the rebels were in complete control of the city.

In a different account of events, written in 1416, Leonardo Bruni says the people of Palermo were holding a festival outside the city when the French came to check for weapons, and on that pretext began to fondle the breasts of their women. This then began a riot. The French were attacked first with rocks, then weapons, killing them all. The news spread to other cities leading to revolt throughout Sicily.

Messina was well fortified, and there the leading family, the Riso, remained loyal to Charles. But on 28 April it too broke into open revolt and in the harbour the people set fire to the Angevin fleet in the harbour.

Charles had ruled as king from Naples rather than Palermo. When he heard of the destruction of his fleet, he exclaimed: “Lord God, since it has pleased you to ruin my fortune, let me only go down in small steps.”

Within six weeks, thousands of French people had been massacred in Sicily. The only place in Sicily not to join the uprising was the small village of Sperlinga, which protected French soldiers in the castle.

After order was restored in Palermo, the citizens proclaimed a free commune answerable only to the pope. They elected leaders, including Bartholomaeus of Neocastro who gave his own account of the revolt in his Historia Sicula.

A Genoese merchant, Alafranco Cassano, brought news to the Emperor Michael that Charles had been defeated. Ambassadors were sent to Pope Martin IV with a petition for each city in Sicily to become a free commune under the sole suzerainty of the Church. Perhaps each city was hoping for a status similar to that of Venice, Genoa, Pisa or other free cities throughout Italy.

However, the Pope was French and continued to support Charles as the rightful King of Sicily. But he underestimated how the Sicilians hated the French and especially Charles, and refused the islanders’ pleas.

The Sicilians then sent for King Peter III of Aragon, whose wife Constance was the sole surviving heir of Frederick II who was not in captivity and in a position to assert her rights. Through his wife’s position, Peter III now claimed the Kingdom of Sicily.

He had assembled a war fleet off the north coast of Africa in Tunis, 200 miles by sea from Sicily. Taking advantage of the revolt, his fleet sailed for Sicily, landed at Trapani on 30 August 1282, and he marched on Palermo, arriving on 2 September.

Pope Martin ordered the people to accept Charles as their king, but Peter countered with a promise to guarantee their ancient privileges. Peter was crowned King of Sicily by acclamation in the cathedral in Palermo on 4 September, becoming King Peter I of Sicily.

Charles counter-attacked with his fleet based in Naples. He blockaded the port of Messina, but failed in his several attempts to land troops on the island.

Years later, Michael VIII wrote: “Should I dare to claim that I was God’s instrument to bring freedom to the Sicilians, then I should only be stating the truth.”

As for Edmund Crouchback, the English boy-king who never set foot on Sicily, he died at the Siege of Bayonne died on 5 June 1296; his body was brought back to England, where he was buried in Westminster Abbey. Eventually, the House of Lancaster claimed the throne of England in the War of the Roses, and he was the ancestor of Henry IV. 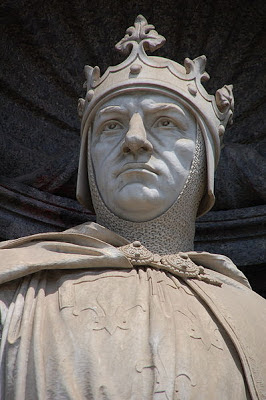 A statue of King Charles I at the Royal Palace, Naples

In the Divine Comedy, Dante sees Charles of Anjou outside the gates of Purgatory “singing in accord” with his former rival, Peter. After 1282, he is usually known as King of Naples. He proclaimed himself King of Albania in 1272 and by purchase he became King of Jerusalem in 1277. He died on 7 January 1285.

For centuries, the Beaumont family, who inherited Wednesbury Manor in Staffordshire and passed it though marriage to the Comberford family of Comberford and Tamworth, claimed they were descended from Louis, son of Charles of Anjou.

The claim was perpetuated in heraldic family trees that William Comberford used to decorate the ceiling of the Moat House in Tamworth in the early 17th century. However, it appears that the only Louis who was a son of Charles of Anjou died in infancy. (For more see here.)

The Beaumont coat-of-arms on the ceiling of the Long Gallery in the Moat House, Tamworth (Photograph: Patrick Comerford)

The War of the Sicilian Vespers between Anjou and Aragon continued for decades, but was more often waged in Spain or on the sea than in Sicily.

The War of the Sicilian Vespers finally came to an end in 1410. After the death of Martin II, a group of Aragonese nobles gathered in the so-called Sicilian “parliament” in the Palazzo Corvaja in Taormina to choose the next King of Sicily.

Sicily was placed under direct Spanish rule, and remained a Spanish controlled island, apart from a brief period of Habsburg rule in the early 18th century, for 450 years until Italian unification in 1860.

Runciman notes that with or without Byzantine gold, it was the people of Sicily alone who fought against their armed oppressor. “However it may have been plotted and prepared, it was that one March evening of the Vespers at Palermo that brought down King Charles’ empire.”

Steven Runciman, The Sicilian Vespers: A History of the Mediterranean World in the Later Thirteenth Century (Cambridge: Cambridge University Press, 1958).

Posted by Patrick Comerford at 13:43