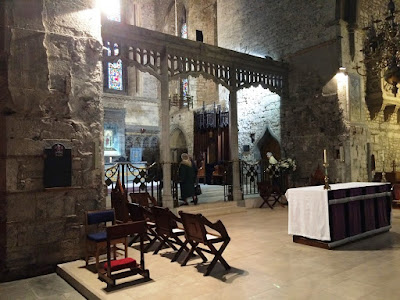 This has been a busy weekend, with a lecture in Saint Mary’s Cathedral, Limerick, on Saturday the role of members of the Church of Ireland in the Easter Rising in 1916, a visit to Adare, Co Limerick, and an invitation to preach at the Cathedral Eucharist in Saint Flannan’s Cathedral, Killaloe, Co Clare, this morning [21 February 2015].

There were opportunities in both cathedrals to explore their history and their heritage, and even to climb the tower in Killaloe Cathedral, with panoramic views at the time across the countryside and along the banks of the River Shannon.

After Saturday’s lecture there was an invitation too to take part in the installation of two canons of the joint chapter that serves both cathedrals.

Perhaps for some people outside the Anglican tradition, the appointment and installation of canons in our cathedrals may seems difficult to understand. But I found the explanations provided yesterday afternoon were timely reflective reminders of my own responsibilities as a canon.

The installations of Jane and Ruth began with these charges to the new canons from the Bishop of Limerick and Killaloe, Bishop Kenneth Kearon:

It appertains to the Office of Canon to be the Counsellor and Adviser of the Bishop in holy things, as well as within as without the Chapter; to be a student of sacred learning, and of such matters as tend to establish and confirm the truth of the Gospel and discipline of the Church; to be constant in prayer for God’s blessing upon our labours and those of our brethren and sisters in these United Dioceses, especially for those of our Joint Chapter; to be zealous for the beauty and services of our Cathedral churches of Saint Mary the Virgin and Saint Flannan. Will you endeavour to do all these things?

I will do so, the Lord being my helper.

The back page of the service sheet provided this short explanation of a cathedral chapter in the Anglican tradition:

A mediaeval cathedral had a large staff of clergy to carry out its task as a centre of religion and learning. These clergy were called Canons. The word Canon is derived from a Greek word meaning a rule or a list, and its use in cathedrals probably stems from both these meanings of the word: a canon was a clergyman who, together with other clergy, lived as a religious community following a common Rule of Life, like monks; and a canon was also a cleric who was on the list of staff in a cathedral.

When the cathedrals in England and Ireland had their prebends stripped from them by an Act of Parliament in the early nineteenth century, the loss of income meant that they could no longer afford to maintain a body of resident canons, and the title is now largely an honour given by a Bishop to a parochial cleric.

But sitting in the chapter stalls in Killaloe Cathedral before I preached this morning, it was good to have been reminded yesterday that being a canon of Christ Church Cathedral really is not much an honour but a privilege with duties and responsibilities. 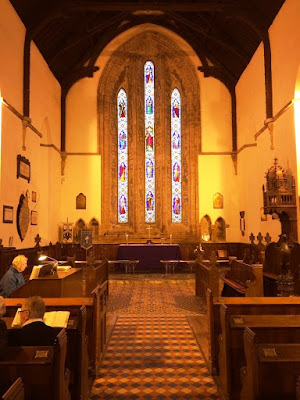