Introducing a showing and discussion of
‘Persepolis’ in Christ Church Cathedral 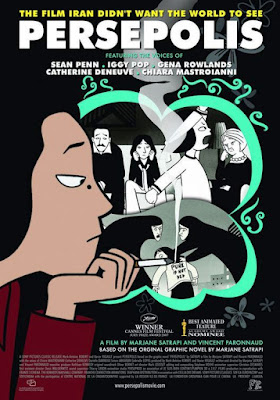 This evening’s movie Persepolis is a 2007 French-Iranian-US animated film based on Marjane Satrapi’s autobiographical graphic novel, also called Persepolis. The film was written and directed by Marjane Satrapi with Vincent Paronnaud. The story follows a young girl as she comes of age against the backdrop of the Iranian Revolution.

The name of the book and the movie refers to the city of Persepolis, capital of the classical Persian empire. The film won the Jury Prize at the 2007 Cannes Film Festival, and was nominated for the Academy Awards.

I read this comic-book-style novel/autobiography in Turkey and discussed it with a number of Iranians there who were disturbed at the policies of Mahmoud Ahmadinejad, who was President of Iran at the time, and the direction in which he was taking their country.

Iran is one of the great classical civilisations of the Eastern Mediterranean and Middle East world, alongside not only Rome and Greece, but also Egypt, Baghdad and Syria. Yet, we have seen it as “other” rather than a constituent part of the classical world that shaped our understanding of civilisation, perhaps not since the rise of Islam, but perhaps even since the Spartan and Peloponnesian wars, the battles of Marathon, Thermopylae and Salamis.

After the Battle of Salamis-in-Cyprus, Thucydides paraphrases Homer when he says “out of many few returned home.” But he makes no further mention of the Persians.

Did we forget their civilisation after they were conquered by Alexander the Great because they left us no great playwrights, philosophers or epic poets?

Yet, this was the civilisation that gave us the laws of the Parthians and the Medes, the Magi, Cyrus the Great, Darius and Xerxes. Some even argue that this society influenced western religious thinking through the Pharisees, and that their name means not “set apart” or “separated” but Persian.

This movie gives us an insider’s insight into the internal debates and conflicts in a much-misunderstood country that is a current player in the crises in the Middle East. But I also think it brings us to ask many questions about our own society, in western Europe in general but also in Ireland.

This is the story of Marjane Satrapi, the author, who comes from a prominent Iranian family – her maternal grandfather was the son of the last Qadjar emperor of Persia, and she has been described by some critics of the move as Iran’s “Red Princess.”

Her Uncle Anouche and her Great Uncle Fereydoune were involved in establishing the short-lived Iranian independent pro-Soviet Republic of Azerbaidjan in 1946. Her parents were both politically active and supported Marxist causes against the monarchy of the last Shah.

The movie begins in an airport looking back on her childhood, the good and the bad times with her family, and the political conflicts in Iran. She remembers how as a young girl in Tehran, she saw herself as a prophet in the line of Zarathustra, Moses, Jesus, and Mohammed. Her imaginary friend is her vision of God as an old man with a long flowing beard. In these scenes from childhood, God encourages Marjane to become a prophet and to stand up for love and justice. During the uprising against the Shah, her middle-class family takes part in all the rallies and protests.

One evening, her Uncle Anoush arrives to dinner after being released from prison and tells stories of his part in politics and protests.

With the new elections, Marji's family are deeply upset when Islamic fundamentalists win the elections with 99.99% of the vote. Under the new government, women are forced to wear the head scarf, and Uncle Anoush is rearrested.

When the Iran-Iraq conflict breaks out, Marji sees the horrors of war. Her father is threatened by gun-toting militia members and watches her critically ill uncle die after an unqualified hospital administrator refuses to allow him to travel abroad for treatment.

The family seeks solace in secret parties with simple pleasures.

Marji refuses to stay out of trouble, buys Western music, including Michael Jackson, Iron Maiden and punk rock on the black market, wears denim jackets, and challenges her teachers.

Her parents fear her arrest and she is sent away to school in Vienna, where she lives with Catholic nuns and is upset with their discriminatory and judgmental behaviour.

But she finds Western Europeans superficial people who take their freedom for granted. As the years go by, Marji is thrown out of her temporary shelter for insulting a nun and finds herself on the streets. After going from house to house, she ends up in the house of Dr Schloss, a retired philosophy teacher. One night, after lying at a party about her nationality, saying she is French, she recalls her grandmother telling her to stay true to herself.

After a would-be lover turns out to be gay, Marji has a passionate affair with Markus, who cheats on her. When Marji leaves when she is accused of stealing Dr Schloss’s brooch, she finds has nowhere to go. She lives on the streets, contracts bronchitis, and almost dies.

After recovering in hospital in Vienna, she returns to Iran where she hopes the end of the war will change her family’s quality of life. But she falls into a clinical depression, and attempts suicide.

She falls asleep and dreams of God and Karl Marx reminding her of what is important in life. She begins enjoying life again, goes to university and parties, and has a relationship. But what has changed in Iran?

The regime is more tyrannical, there are mass political executions and petty religious absurdities have become common. When she and her boyfriend are caught holding hands their parents are forced to pay a fine to avoid lashings.

But Marji remains rebellious. To protect herself she falsely accuses a man of insulting her, marries her boyfriend and finds she is a disappointment to her grandmother who reminds her that both her grandfather and her uncle died supporting freedom and innocent people.

Marji repents and goes on to challenge blatant sexist double standards in her university.

After the tragic death of a friend and her divorce, the family decides Marji should leave Iran permanently.

As her taxi drives away from Paris-Orly Airport, the narrative cuts back to the present day. The driver asks where she is from and she replies Iran. She is going to keep her promise to her uncle and her grandmother that she would remain true to who she is.

Any anthropomorphic portrayal of God is shocking to Muslims. But Marji’s vision of God reminds me of a vision of God also described by the Turkish writer Orhan Pamuk in his book Istanbul (2005):

Until I was 10, I had a very clear image of God: ravaged with age, and draped in white scarves, God had the featureless guise of a highly respectable woman. Although She resembled a human being, She had more in common with the phantoms that populated my dreams: not at all like someone I might run into in the street.

So mystical visions of God are not outside the mainstream of Islam.

But does God remain for you a distant, benign figure in the clouds with a long white beard?

And does this movie challenge your perceptions of Islam?

Does this movie confirm your worst perceptions of Iran and the Iranian revolution?

Does this film provide you with a new understanding of my Muslims may see Western society as decadent and judgmental?

The characters do not look like foreigners in a foreign country. Is the author saying any country could easily become another Iran?

Are you surprised by the images of God described by Marji?

Do you think Persepolis is “offensive to Iran and Islam”?

Has religion, per se, rights that need to be considered, or even upheld, in law?

Can you find parallels between the Iran of Persepolis and Ireland of a few decades ago, not even a generation ago?

Apart from religion, do Marji’s perceptions of Turkey or her expectations of Western Europe parallel what people in Ireland once expected of England or the US?

The film is presented in the black-and-white style of the original graphic novels, but present-day scenes are in colour, and sections of the historic narrative resemble a shadow theatre show.

Is this “a coming-of-age tale”?

Have we come of age in Ireland today?

And in the year of 1916 centenary commemorations, should the political values of a generation ago, or the generation before that, demand a role in shaping our political demands and expectations today?

Some other questions arising from the movie that we might discuss include:

How do you respond to the old man who died of cancer was turned into a (false) martyr in the name of the revolution?

The book tells us a revolution is like a bicycle – they will stop if they do not maintain their momentum. How do you relate this to the maintenance or loss of revolutionary ideals in Iran or, say, Cuba or post-1916 Ireland, or post-1917 Russia?

Is idealism doomed to remain naïve?

Is war a way of deflecting attention from problems inside a society by creating a threat from the outsider?

Do you recall how the Shah’s regime is presented? Has the West interfered so often in the Middle East that has become part of the problem and can never be part of the solution?

Consider the way the Shah was overthrown and replaced. Is revolution inevitably doomed to replace what is bad by something that is worse? Can you draw parallels with the fears many have today if the Assad regime falls in Syria? Is bad always better than the fear of the worst?

Do we promise paradise to the poor as a way of not dealing with poverty?

Consider the way the nuns are portrayed? Are Islam and Christianity capable of understanding each other without misrepresentation or mis-portrayal?

(Revd Canon Professor) Patrick Comerford lectures in the Church of Ireland Theological Institute, is a canon of Christ Church Cathedral, Dublin, and a former Foreign Desk Editor of The Irish Times These notes were prepared for introducing Persepolis in Christ Church Cathedral on 15 February 2016 at 7.30 pm, the third in a series of films on social justice.