Two monuments in Saint Patrick’s
Cathedral with links with Lichfield 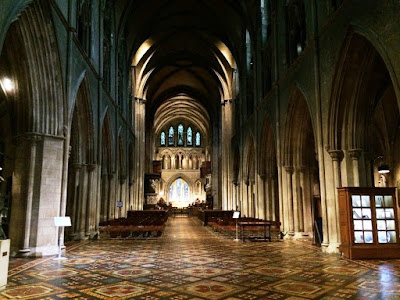 During my visit to Saint Patrick’s Cathedral, Dublin, on Monday evening [11 Aril 2016], I found myself once again standing beneath the monument in the north transept to Field Marshal Viscount Wolseley (1833-1913), whose family name is associated with both Wolseley in Staffordshire and Mount Wolseley, Co Carlow.

Garnet Joseph Wolseley was born in Dublin on 4 June 1833 in Golden Bridge House, Inchicore. Many years later he returned to the same part of Dublin when he was the Master of the Royal Hospital, Kilmainham, which I visited last Saturday and which is just a short walk from the very house where he was born.

Wolseley is in mid-Staffordshire, between Stafford and Rugeley, north of Lichfield. The Comberford and Wolseley families’ coats-of-arms are inverted reflections of each other, and they were related by marriage in the 16th century. Woseley and Comberford are about 20 miles apart, and one of my earliest contracts as a freelance journalist was to interview Sir Charles Wolseley of Wolseley for the Lichfield Mercury and the Rugeley Mercury over 40 years ago.

The Wolseley family was descended from an old Saxon family that once owned one of the oldest estates in Staffordshire by King Edgar. However, the printed and online versions of the family tree are confusing and show many inconsistencies.

Lord Wolseley once stated: “I was reared in the belief that my family was one of the very few that could trace its direct descent in the male line from ancestors who had lived before ‘the Conquest’ on lands still held by us, their descendants. According to an unwritten legend, accepted of course by us as gospel, we were given those lands – which subsequently became the Manor of Ousley, then Wolslia, and now Wolseley – by King Edgar for exterminating the wolves on Cannock Chase.”

He claimed: “The truth of this legend is strengthened by the fact that from time immemorial we have borne on our arms the Talbot Dog – the wolfhound of the Saxons and that the wolf’s head has always been our crest, and Homo homini lupus our motto.” The motto means: “Man is a wolf to his fellow man.”

In the 1690s William Wolseley was allegedly rewarded with lands in Ireland for taking the side of William III against James II. However, the grant of lands was not easy to prove, and in the early 1730s Sir Richard Wolseley moved from Staffordshire to Ireland to pursue his claims. He was not successful, but married and settled in Tullow, Co Carlow, and became the ancestor of the Irish branch of the Wolseley family. 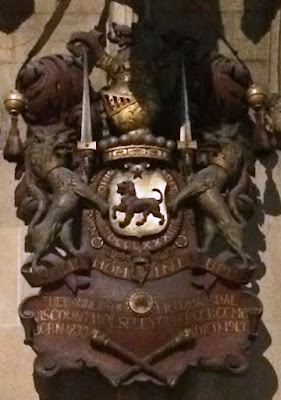 Wolseley’s parents rented Golden Bridge House from William Smith when he moved to England. However, Wolseley’s father died when he was a seven-year-old, leaving the family in poverty.

Wolseley’s experiences of childhood poverty in Dublin may have coloured his esteem of the City. In his biography, he says that “Dublin was then a dreary quarter for a man like me who could not afford to hunt, and whose wounded leg pre¬vented him from dancing. Its fragrant (?) river, its quays lined with decaying houses, its squalid streets, made it an undesirable and depressing place of residence.”

This poverty forced Wolseley to leave school when he was 14 and he began working in a surveyor’s office in Dublin.

He then transferred to the 80th Foot or South Staffordshire Regiment and was severely wounded in 1853. He was invalided back to Dublin, and transferred first to the 84th Regiment of Foot and then to the 90th Light Infantry, at that time stationed in Dublin.

Later, he fought in the Crimean War at Balaklava and at the Siege of Sevastopol. He also fought during the Sepoy Mutiny, the Red River Uprising, the Ashanti expedition, at Tel el-Kebir and in the Nile expedition of 1884. His expedition to relieve General Gordon at Khartoum arrived too late.

In 1890, he became Commander-in-Chief of the forces in Ireland, and lived in the Royal Hospital, Kilmainham. The Royal Hospital was only a short walk from Inchicore, and he probably revisited his childhood home at this time.

In his memoir, The Story of a Soldier’s Life (1903), he wrote: “Golden Bridge House was a red brick mansion of the King William or early Queen Anne period. Like most of the old country houses near Dublin, it is now a convent, and a dirty slum has grown up in and around what was once its undulating and well-watered little park.”

He became a field marshal in 1894, and succeed the Duke of Cambridge as Commander-in-Chief of the Forces in 1895. 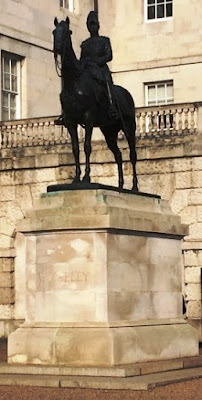 When he died on 26 March 1913, at Menton on the French Riviera, he was buried in the crypt of Saint Paul’s Cathedral, London. But the Staffordshire connection was never forgotten by his family, and he is also commemorated by a tablet at Saint Michael and All Angels’ Church in Colwich. The church is close to Wolseley Park was the ancestral burial place of the Wolseley baronets of Wolseley Park.

There is also an outdoor equestrian statue of Wolseley at the Horse Guards Parade in London. This is the work of Sir William Goscombe John and was unveiled in 1920.

In the operetta The Pirates of Penzance, WS Gilbert – of Gilbert and Sullivan fame – deliberately modelled the character of Major-General Stanley on Wolseley, as did George Grossmith, the actor who first created the role in the opening theatrical run. In another Gilbert and Sullivan operetta, Patience, Colonel Calverley praises Wolseley in the phrase: “Skill of Sir Garnet in thrashing a cannibal.” 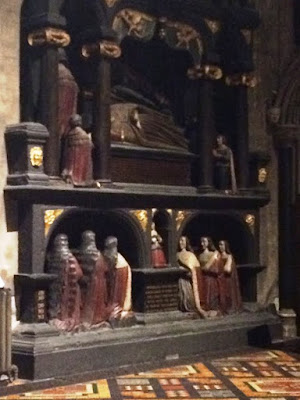 Wolseley’s monument in Saint Patrick’s Cathedral is placed discreetly, almost hidden. The monument that most visitors notice immediately is the large monument erected at the West End of the Cathedral in 1632 by the grieving Richard Boyle, 1st Earl of Cork, for himself, his wife and family.

The size and position of the monument caused great offence to many, including the Lord Deputy, Lord Wentworth, and the Archbishop of Canterbury, William Laud, and eventually it was removed to its present position end in 1863.

The monument has four tiers and at the top one is the recumbent figure of Catherine’s grandfather, and here I found another Lichfield connection.

Robert Weston studied law at Oxford and from 1546 to 1549 he was Principal of Broadgates Hall, later Pembroke College. A successful church lawyer, he was Vicar-General of the Diocese of Lichfield (1550), Chancellor of Exeter (1551-1553), and Chancellor of Lichfield (1564). He was also MP for Exeter (1553) and for Lichfield (1558-1559). He became Lord Chancellor of Ireland in 1567, but because the salary was inadequate, Queen Elizabeth also made him Dean of Saint Patrick’s Cathedral, and also in 1570 Dean of Wells.

Weston was a layman and was unhappy about these appointments because he was not ordained. However, he became the effective leader of the Church of Ireland until he died on 20 May 1573.

Weston married Alice Jenyngs, daughter of Richard Jenyngs of Barr, near Lichfield. His son-in-law, Sir Geoffrey Fenton (1539-1608), came to Ireland as joint Secretary of State to the Lord Deputy of Ireland, Lord Grey de Wilton, and became a colleague of the poet Edmund Spenser.

He has been described as a zealous Protestant. On the instructions of the Lord Chancellor, Archbishop Adam Loftus, he was responsible for the torture of Archbishop Dermot O’Hurley of Cashel. That torture in Dublin Castle and the subsequent execution made O’Hurley a martyr in Ireland.

The Earl and Countess of Cork are depicted on the monument in their robes and coronets, surrounded by their children. One of the figures on the bottom tier of the monument represents their 14th child and youngest son. Robert Boyle was born in Lismore Castle, Co Waterford, on 23 January 1627. He published his law relating to the pressure and volume of gas, known as “Boyle’s Law” in 1662, and is known as the “Father of Modern Chemistry.”

He died on 31 December 1691 and was buried in the churchyard of Saint Martin-in-the Fields, London.