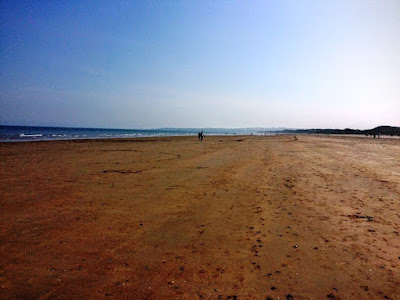 Summer has arrive. Or so half of the north-side Dublin seems to think.

The temperatures in Dublin soared to 20 and a little above in the early afternoon. I had been in Christ Church Cathedral from early morning, preaching at the Cathedral Eucharist. As I stood outside the south porch door as the canon-in-residence for this week, greeting and welcoming visitors, the curious and the regular members of the congregation, I already felt that the sun was going to break through and that this was going to be a warm, bright and sunny Sunday.

After coffee in the crypt, two of us emerged from the darkness below the cathedral into the sunshine.

Initially, we had thought of having lunch in the city centre, and after yesterday’s busy day by the banks of the Shannon, we thought of snatching a few lazy hours in the back garden, sipping cold white wine.

But this sunny Sunday afternoon seemed like an opportunity that was too good to be missed.

And, to our chagrin, so did most Dubliners, it now appears.

We were now looking forward to lunch at the Olive on Strand Street in Skerries, before a walk along the beach in the sunshine, followed, perhaps, by ice creams drizzled with double espressos at Storm in a Teacup on the pier, before another walk around the harbour.

Little did we realise how are plans had been frustrated even before we got to Skerries.

We managed to get into Skerries but soon realised that every street and laneway was being closed off for a cycling race. Every parking space had been taken or was blocked off. As we drove around in circles, we thought we could be circling for hours. Would we ever get out? Certainly there was no prospect of lunch, and even less prospect of those by-now badly-needed double espressos.

Eventually, we found a gap near Holmpatrick Church, and headed south along the coast road. Although Loughshinny is beautiful, sunshine or no sunshine, there is nowhere for lunch, and certainly nowhere for double espressos.

We parked outside the Thatch on Main Street in Rush, but found to our disappointment that it is closed. There was a paper promise in the window that it is going to reopen soon under new management. But obviously not this afternoon, and certainly not in time for much-needed coffee.

Ardgillan Castle in Balbriggan? Or Donabate?

We eventually settled on Donabate. We stopped at Mrs Jones Farm Kitchen, at Ballymadrough, about 4 km from Donabate, close to Exit 4 on the M1. There the espressos are good, the panini are generous, and the sunshine made us feel exceptionally lazy as we lunched outdoors.

We finally stirred ourselves, and headed east towards Donabate. Once again, the roads were clogged with traffic, not because of any cycle race, but simply because so many people had realised that was the best and sunniest afternoon we have had so far this year, and this was a day to be beside the sea.

The queues for ice creams outside the shops in the village made me wonder whether more heat was being generated than would be sated by consuming the final purchases. 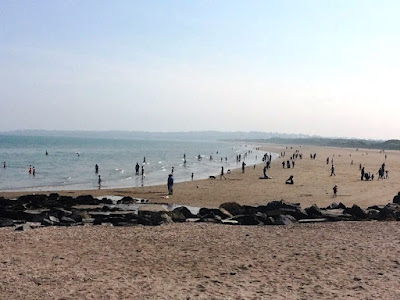 Eventually, we found one of the few available parking spaces in new car park beside the Waterside Hotel, and walked down to the beach at Balcarrick.

The beach was crowded with families, adults, children, babies and dogs. The tide was out, the golden sand was firm beneath our feet, the sea and the skies were blue, and some children were brave enough to make their way into the water.

As we walked further south along the beach, towards the Malahide Estuary, the numbers of people began to thin out. If there had been some well-managed sunbeds, a few quiet beach bars, and someone walking up and down selling donuts and beer, this could have been a scene in the Mediterranean.

Certainly, it was a glorious afternoon to be by the sea, and all our efforts were worth it.

We returned home by another way … and there was still enough sunshine left in the early evening to enjoy that glass of cold white wine. 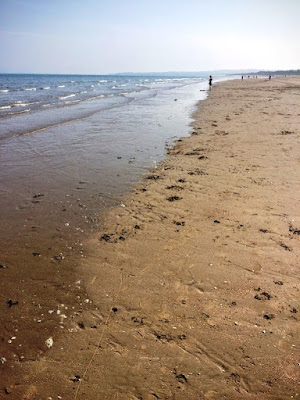 The beach at Balcarrick became less-and-less crowded the further south I walked along the shoreline (Photograph: Patrick Comerford, 2016)

Posted by Patrick Comerford at 19:52