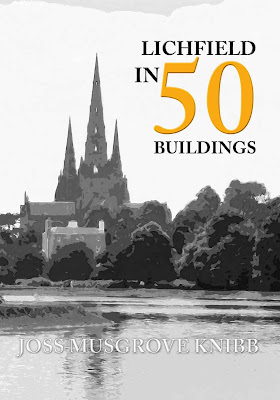 After having your own book published or contributing to a new book, the next best pleasure for a writer to have your work acknowledged and praised in a book by another writer you both respect and admire.

Joss Musgrove Knibb, who lives in the Vicars Close by Lichfield Cathedral, is both a journalist and an historian, and has actively encouraged and helped the work of local historians in Lichfield.

A few years ago [12 May 2014], when I led a walking tour of the Cathedral Close on the invitation of Kate Gomez and the local history group, Lichfield Lore, Joss was supportive of the way I tried to assemble the story of each house and building in the Close and the stories of their residents.

Her new book, Lichfield in 50 Buildings, published within the last fortnight [15 October 2016] arrived in the post this week. Ever since, I have been engrossed in her exploration of the history of this rich and vibrant community with her selection of its greatest architectural treasures.

Appropriately, she begins with the legend of the massacre of 999 Christian martyrs by the Romans in the year 300, and ends with a visit to Letocetum, the Roman site at Wall, 1.5 miles south of Lichfield. The stories of both are mistakenly identified with the name of Lichfield, but with a gentle flair she lays these legends to rest. Instead, she takes us through the history of Lichfield by taking us on a walking tour, carefully selecting 50 buildings that tell the story of the cathedral city.

Lichfield has a proud and distinctive identity that stretches from the late seventh century, when Saint Chad wandered into a watery valley in the heart of the Kingdom of Mercia, to the Black Death, the English Civil War and the days of the Enlightenment, when Lichfield was home to great minds such as Samuel Johnson and Erasmus Darwin.

This story is embodied in the buildings that have shaped the city and have become true architectural treasures. From its 1,300-year-old cathedral, the impressive Guildhall to the modernist Garrick Theatre, they tell the and celebrate the story of Lichfield, with a new and accessible way.

The 50 buildings she has selected:

22, St Michael on the Greenhill.

28, The Guildhall and Gaol Cells.

31, The Tudor of Lichfield.

35, Hospital of St John the Baptist without the Barrs.

37, The Friary and Bishop’s Lodging.

I suppose there is a certain literary licence in taking three and then two houses in the Close as one building, and then having separate entries for the Cathedral and Saint Chad’s Head Chapel, and for Saint Chad’s Church and Saint Chad’s Well. And it is inevitable that in a cathedral city so many of the chosen buildings should have associations with cathedral and church life. But here too are buildings associated with the great writers and brilliant minds associated with Lichfield, including Samuel Johnson, including the places where he was born, baptised and schooled and where his family members were buried, and Erasmus Darwin, the grandfather of Charles Darwin.

Nor does she neglect the structures that architectural historians sometimes overlook, such as the Sandfields Pumping Station, which has been the subject of much loving attention by local historians anxious to preserve our industrial heritage.

Here too is the Causeway Bridge linking Beacon Street and Bird Street, the Pinfold where Beacon Street meets Stafford Road, and the statue of Captain John Smith of the Titanic, as safely inland as you can get in England, and there are fine examples of modern architecture in Lichfield too, including Alexandra House and the Garrick Theatre.

But if the Sandfields Pumping Station has been saved for the future, there are other buildings that are at immediate risk in Lichfield, and draws attention in particular to the forlorn Regal Cinema on Tamworth Street, the only surviving art deco building in Lichfield, the much-vandalised Angel Croft Hotel on Beacon Street, and the Friary and Bishop’s Lodging, which may not be accessible to the general public in future years.

The book is written with insightful humour too. Because of its proximity to the cathedral, I had presumed all along that Quonians Lane off Dam Street was a misspelling of a Latin word in a phrase in the Creed, Quoniam tu solus Sanctus. Certainly, it was called Quoniames Lane in the 14th century. But she points out that the word quoniam ‘was used as a euphemism for a woman’s “nether-regions” by the Wife of Bath in Geoffrey Chaucer’s Canterbury Tales.’ And she asks: ‘Could Quonians Lane have been a Middle Ages haunt of “ladies of the night”?’

This book is richly illustrated with photographs by her husband, Carl Knibb, and with a complementary selection of postcards from the collection of Dave Gallagher.

There are hospitals, workhouses and breweries, pubs, pumps and gaol cells, and the stories of marital scandals, snobbery and spite in the Cathedral Close.

It is impossible to squeeze the story of a place so wonderful into just 50 short vignette-style entries. I know each and every one of these places intimately, some more than others, for this is one of the places I can call home.

Missing for me, perhaps, are the Old Library and Museum on Beacon Street, now the city Register Office, the nearby childhood home of David Garrick, the Hedgehog on Stafford Road – if only for its connections as Lyncroft House with Mozart’s friend Muzio Clementi, Stowe House, the home of the eccentric Richard Lovell Edgeworth and his daughter the writer Maria Edgeworth, Christ Church, Leamonsley, with its Pre-Raphaelite chancel ceiling and walls, the house in Cherry Orchard where the poet Philip Larkin once lived, the Railway Bridge at Upper John Street, with its collection of Victorian heraldic plaques, and the Swan, which until it closed in the 1970s was the oldest pub in Lichfield.

But this is not to quibble. Rather it is to say that a companion volume on another 50 buildings in Lichfield could be just as educational and informative, as useful and entertaining. There is one minor error where the statue of Edward VII in Beacon Park is described as a ‘statue of Edward VI.’

Joss Musgrove Knibb is a professional journalist in Lichfield, and editor of the magazines Citylife in Lichfield, and the new Citylife in Rugeley, launched earlier this month. We have worked together on previous magazines, and she has contributed to the Lichfield Mercury, Staffordshire Life and the Stoke Sentinel, and has spoken at the Stoke Literary Festival. Her first book, First Lines: A Celebration of the Bravery, Humour and Resilience of Four Local Lads Who Served in the Great War, was chosen as a ‘WH Smith Recommends’ title.

This is a cheerful companion to another recent delightful book, Lichfield Then & Now in Colour, by Annette Rubery (Stroud: The History Press, 2013). I can see an immediate need for a similar book about, for example, neighbouring Tamworth, with accounts of Tamworth Castle, Saint Editha’s Church, the Moat House, the Town Hall, the Spital Chapel, Guy’s Almshouses and so much more.

In the acknowledgements in her book, Joss says: ‘Researching and writing this book has been a pleasure. Without doubt it would not have been possible without the guidance of several local historians who have all been incredibly generous with their help and advice – my especial thanks to Kate Gomez, Joanne Wilson, David Moore, David Gallagher, Steve Johnson and the Revd Canon Professor Patrick Comerford.’

It has been a pleasure to find myself in such good company and to read this book over and over again. It is going to be well-worn, well-thumbed and well-marked in the weeks to come as I bring it on my next walks around Lichfield. I shall have to buy myself a second copy soon to keep safe. 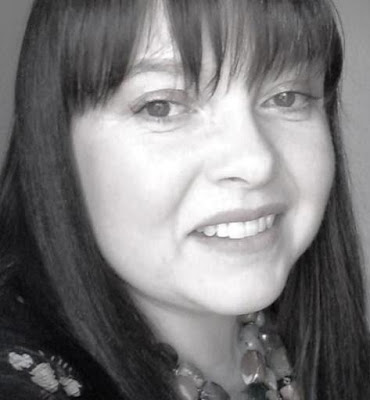