Askeaton Castle is perched on a rocky island in the middle of the River Deel and is the focal point of the town (Photograph: Patrick Comerford, 2017)

Patrick Comerford
I got back to Askeaton in the mid-afternoon today [10 February 2017] after working in Dublin for the last two or three days. As I walked into Askeaton from the rectory, facing towards a sky filled with a beautiful red sunset, the skyline was dominated by the majestic ruins of Askeaton Castle in the centre of the town. The castle is perched on a rocky island or outcrop in the middle of the River Deel and is the focal point of the town.

I understand that at the moment the site is only open to the public by appointment on Saturdays and Sundays in the summer months. Much of it is hidden from view behind corrugated gates and fencing. Continuing restoration and repair work make it unsafe for visitors, and as I looked at it this afternoon, I imagined this essential work may last many more years.

The castle dates back to 1199, when Askeaton and the surrounding area were granted to Hamo de Valoignes, who was the Justiciary of Ireland from 1197 to 1199. However, the Annals of Inisfallen record that William de Burgo was granted the castle and estates of Askeaton by Dónal Mór O’Brien, King of Thomond. Other accounts say Askeaton Castle was built in 1199 by William de Burgo and that the original castle was rebuilt in the 13th century.

I was interested to note that Thomas de Clare was an uncle of Lady Elizabeth de Clare, who gave her name to Clare College, Cambridge, where I stayed last year [August 2016]. She was a granddaughter of King Edward I and the heiress to large estates and tracts of land in Ireland, through her descent from Strongbow and her marriage into the de Burgo family, Earls of Ulster and ancestors of the great Burke families.

Robert de Welles died in 1320, and the Earls of Desmond made Askeaton Castle their main seat of power after 1348, when Maurice FitzGerald, 1st Earl of Desmond, paid 40 shillings for the Barony of Lystifti. The castle that stands in the River Deel today dates from this time, and the FitzGeralds of Desmond made the castle one of their principal residences for two centuries.

The Earls of Desmond were a powerful presence in mediaeval Munster, and they held Askeaton Castle for over 200 years. They made it their power base, and from here they ruled most of Munster for generations. 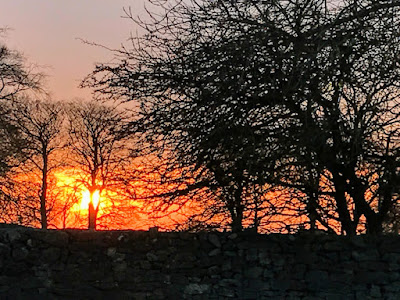 Sunset in Askeaton seen from the Rectory this evening (Photograph: Patrick Comerford, 2017)

Askeaton Castle was the powerful stronghold of the tragic Gerald FitzGerald (ca 1533–1583), 15th Earl of Desmond, also known as the Rebel Earl. He succeeded his father in 1558 and a year later, in 1559, he rebelled against the policy of surrender and regrant imposed on Irish lords. The Desmond Rebellion turned into a war across Munster.

Desmond strengthened the defences of Askeaton Castle in 1574, and Sir Nicholas Malby was unsuccessful when he attacked the castle in 1579. In his anger and his frustration, Malby then attacked the neighbouring Franciscan Abbey and destroyed the town of Askeaton.

During a second attack on Askeaton on 3 April 1580, Desmond and his dwindling band of followers slipped out of Askeaton Castle, and as they made their departure they blew up part of the outworks. What was left of the castle was easily captured the next day, it was garrisoned, and Captain Francis Berkeley was put in command as warden of the castle and appointed Provost Marshall of Connaught and Thomond.

Berkeley continued to hold Askeaton Castle throughout the remainder of the Desmond rebellion, despite opposition from the President of Munster, Sir John Norreys. Desmond’s followers would abandon him, however, and as he fled with just four loyal retainers he was slain on 11 November 1583 by Moriarty of Castledrum, at Glenagenty, five miles east of Tralee. The Lord Justice, Sir William Pelham, who had proclaimed Desmond a traitor in 1579, then took possession of Askeaton Castle. It was the beginning of the end of the FitzGerald reign in Munster.

Askeaton Castle then came into the ownership of Francis Berkeley, who also received a grant of 7,000 acres of confiscated Desmond land in the area. Although technically the castle was now in the hands of the Crown, he received a grant for the new Manor of Rock Barkley and settled 56 new families on the estates. In 1596, he married Jane Loftus of Rathfarnham Castle, a daughter of Adam Loftus, Archbishop of Dublin. In 1597, he was appointed the Governor of Limerick Castle. 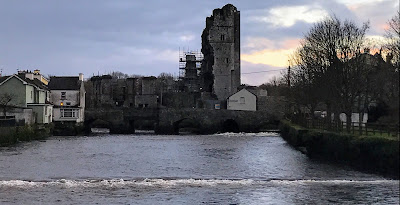 Askeaton Castle and the mediaeval bridge seen from the quays on the banks of the River Deel (Photograph: Patrick Comerford, 2017)

In 1598, the tenants of Berkeley’s manor, 500 men, women and children, sought refuge in Askeaton Castle as it came under siege. Most of the people who were hiding in the castle were taken to safety on boats at the quay on the River Deel and were brought up the River Shannon to Limerick. The town of Askeaton was pillaged and the siege turned into a blockade.

When a relief of the castle was organised in June 1599, the besieging forces were encouraged by the new claimant to the title of Earl of Desmond, James FitzThomas FitzGerald, known as the ‘Sugán Earl.’

The siege had lasted 247 days when Lord Essex and his troops arrived at Askeaton on Sunday 10 June 1599. Berkeley was knighted, and later as Sir Francis Berkeley he took a leading role at the Battle of Kinsale in 1601. Some years later, the ‘Sugán Earl’ died in the Tower of London ca 1607 or 1608. His brother, John FitzThomas FitzGerald, married a daughter of Richard Comerford of Danganmore Castle, Co Kilkenny, and the couple escaped to Spain, where he was known as the Conde de Desmond. He died a few years afterwards in Barcelona. FitzGerald His son Gerald, also known as the Conde de Desmond, entered the service of the Emperor Ferdinand, and was killed in 1632.

Meanwhile, in 1610, Berkeley proposed walling the town of Askeaton and strengthening the castle at his own cost. James I granted him the castle for life, the grants to the Manor of Rock Barkley were confirmed. Askeaton became a parliamentary borough, sending its own MPs to Irish House of Commons, and a new town council was formed in 1612, with Edmond Drew as the first provost or mayor of Askeaton.

Francis Berkeley died at Askeaton on 20 December 1615. His interests in Askeaton passed to his sons, first Maurice Berkeley (1598-1622) and then Henry Berkeley (1606-1625). But they had no children, and Askeaton Castle and the Berkeley manor were then inherited by the descendants of their sister Gertrude, who married John Taylor.

During the civil wars in the 1640s and 1650s, Askeaton Castle was occupied by Lieutenant Patrick Purcell of the Confederate Catholic forces. Askeaton was attacked and destroyed by the Cromwellian Captain Daniel Axtell in 165, and he hanged Patrick Purcell. Axtell had been the captain of the parliamentary guard at the trial of King Charles I in 1649, and shortly after the Restoration in 1660 he was hanged, drawn and quartered as a regicide.

William Taylor’s daughter Catherine married Hugh Massey, 2nd Lord Massey, in 1760, and so Askeaton Castle and the estates passed to the Massey family, while her sister Sarah married Henry Butler, 2nd Earl of Carrick. Both Lord Massey and Lord Carrick received substantial financial compensation when the ‘rotten borough’ of Askeaton was abolished at the Act of Union in 1800.

The castle that was dismantled by Axtell and his Cromwellian forces remains as it must have looked in 1652 and was slowly crumbling away until the present restoration work began. 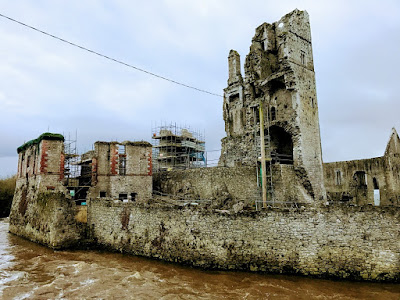 In the grounds of the castle, the Great Hall is one of the finest examples of its kind in Ireland. It was built ca 1440-1459 by James FitzGerald, 6th Earl of Desmond or ‘Usurper’ Earl, who died in 1463. It served as a place of feasting, where the Earls of Desmond entertained their allies and welcomed their guests.

The hall was 72 ft long by 30 ft wide, and is one of Ireland’s finest examples of a banquet hall. It has a fine groin-vaulted chamber on the first floor that is part of an earlier hall built on the same spot. The three blind arcades and carved windows on the south wall are of exceptional design. They are said to have been built by the same craftsmen who built the nearby Franciscan friary, and they are of the same design.

The architectural details of the Banqueting Hall have been compared with the nearby Franciscan Friary (Photograph: Patrick Comerford, 2017)

Underneath the hall are said to be wine cellars and kitchens dating from the 13th century, although I have yet to see these. A small mediaeval church attached to the rear of the hall is largely featureless with only one window remaining.

Castle Gate is an 18th century landmark building at the entrance to the castle. It has surviving mediaeval fabric, spans one branch of the River Deel at this point, and probably served as the gate lodge of the castle. It is a Protected Structure and is listed on the National Inventory of Architectural Heritage.

Next to the castle, the infamous Hellfire Club was built in 1740, the same year that the friary was finally abandoned by the Franciscan friars. It is built built of a mixture of red brick and stone. The Hellfire Clubs of the time, which were found throughout Ireland and Britain, were gentlemen’s clubs where rich men met to drink, play cards and consort with prostitutes. Many stories of the occult and appearances of the Devil surround these Hellfire Clubs, and they may have been circulated to deter prying intrusions by inquisitive neighbours anxious to find out about the club activities.

The club in Askeaton had closed by 1800, and the façade of the building collapsed in the 1990s.

Askeaton Castle is a National Monument in State ownership, but it remains closed to the public as structural renovations continue. But the influence of the castle on the layout of the town is still discernible. Askeaton is unusual to this day in having two town squares – the East Square and the West Square located on either side of the Castle Island. 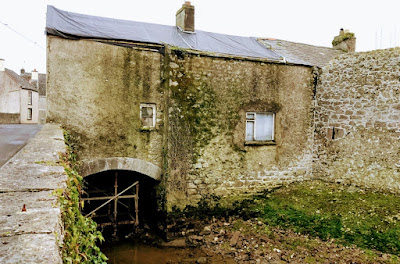 Castle Gate is an 18th century building with mediaeval fabric and spans one branch of the River Deel (Photograph: Patrick Comerford, 2017)