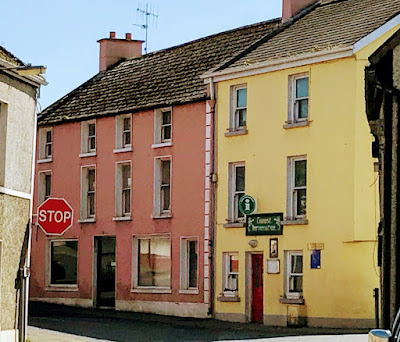 Some Irish towns can confidently boast of a central market square, even if it has no town hall, court house, Gothic parish church or monumental statue to add to its dignity.

Some towns have no square at all, and wish they had one as a focus for visitors, tourists and local parades.

Wexford has three squares, with Redmond Square in front of the North Station, the Bull Ring in the centre of the town and Cornmarket close-by.

Askeaton, despite its size, has two squares, East Square and West Square, and although they have no elegant public buildings they are surrounded by tall shops and houses once decorated in bright and declaratory yellows, reds, creams, greens and pinks. Where there is grey, brown or light blue, it serves to highlight its neighbours in the rays of the sun.

In Trastevere or in the backstreets of a town in Tuscany, these confident colours would attract the attention of tourists’ cameras and feature in photographic blogs.

The buildings look dull, if not neglected, in winter, but as the promise of summer arrives, they had a confident look to this small town in west Co Limerick.

In the East Square, for the first time since I arrived here, the bright red door of the three-storey yellow Tourist Office was opened, albeit briefly, yesterday [3 May 2017] so two or three visitors could step out onto the terrace behind and take in the majesty of the Desmond Castle that towers over the cascading River Deel below. 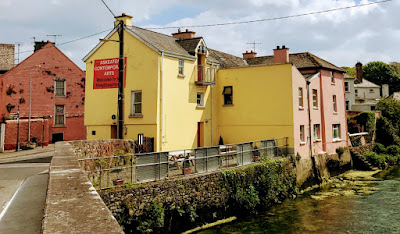 The rear of townhouses on the East Square, overlooking the River Deel (Photograph: Patrick Comerford, 2017)

The tall pink townhouse by the tourist office may be vacant, but it adds to the character of the East Square. This end-of-terrace four-bay three-bay house and former shop, was built around 1810, and has a two-storey addition to the rear or west elevation., overlooking the river.

This substantial town house was once two separate houses. But, despite the insertion of large display windows on the ground floor, retains much of its character and form. The retention of the slate roof, chimneystacks and sash windows all help to conserve the original appearance of the building. 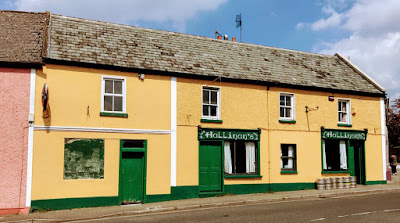 Hallinan’s public house the East Square appears to have been built first as a terrace of three houses (Photograph: Patrick Comerford, 2017)

On another side of East Square, Hallinan’s public house, with its bright yellow walls and green doors and windows, is a terraced, four-bay two-storey house and public house, built around 1800, with render shopfronts to the front dating from the mid-19th century. The shopfronts have scrolled consoles with lion-head motifs, fascias and cornices.

I stood outside Hallinan’s this morning as I waited for the bus into Limerick for the opening of the General Synod of the Church of Ireland.

It seems this pub was first built as a terrace of three houses, but is now in single ownership. Its substantial scale and broad frontage make it an imposing and attractive feature in the East Square in Askeaton.

The simple matching shopfronts, which probably date to the mid-19th century, provide the façade with a coherent decorative scheme, which is further enhanced by the retention of features such as the slate roof and sash windows.

Beside Hallinan’s, another pink house is a substantial town centre property with large garden and rear access. This house has five bedrooms, with two further bedrooms in the annex, and there are two separate entrances and rear access.

On the west gable end of this house, the wall is covered in painted slates, in a fashion that I have also noticed in Wexford. This building has placed on the market with an asking price of €135,000. 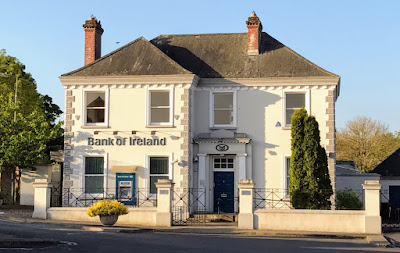 The Bank of Ireland on East Square stands on the site of the former Courthouse in East Square (Photograph: Patrick Comerford, 2017)

Facing Hallinan’s pub, the Bank of Ireland on East Square stands on a prominent site that was once the site of the courthouse. This bank was built around 1930, and has become is an important component of the Square.

This is a detached, four-bay two-storey bank, built around 1930, This bank has been very well maintained to present an almost intact original aspect. The applied ornamentation reveals high quality craftsmanship, particularly on the façade. The building retains important original features and materials, including the slate roof, sash windows and brick chimney-stacks.

Having enjoyed the Tuscan colours of the houses in East Square in the mid-week sun, I must introduce the charms of Askeaton’s West Square on another day. 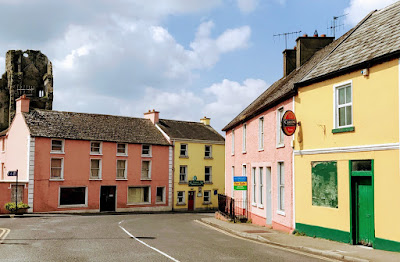