Georges Meis and his photographs
of summer colours on Greek islands 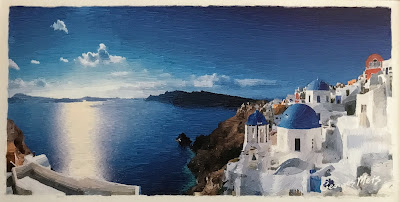 An image of Santorini by Georges Meis, bought in Rethymnon last year (click on image for full-screen resolution) …

… is based on one of his well-known original photographs

You may not be familiar with the name of Georges Meis. But if you have been on holiday in Greece then I am sure you know his work as a photographer, even if you have not noticed his name.

His photographs appear on many of the most popular postcards throughout Greece, and his collections of photographs provide some of those popular, heavy colourful books that tourists bring home as presents or coffee table books.

His exceptional photos of stunning Greek Island scenery, especially Santorini, Mykonos and Crete, are easy to recognise and have been reproduced on thousands of postcards, posters, calendars, placemats, magnet calendars, and other souvenir items sold throughout Greece.

They capture the colours of Greece, particularly the blue domes, doors and windows and white walls that create images that are now almost every tourist’s stereotypical image of Greece in the mind’s eye.

But Georges Meis also captures wild primary colours, fading doors, mesmerising sunsets and gnarled and dignified faces of old people who know every joy and every hardship that modern Greece has endured.

Almost every year, without failure, I have had a calendar with his photographs hanging in one of my studies or offices, and each year I buy countless copies of his photographs on postcards – not to send to family and friends but just as keepsakes to enjoy as the sun fades and summer turns to autumn.

The 3,000 bare, rocky outcrops in the blue Aegean are his raw material as an artist. His eye, how he frames and catches old doors, narrow steps, inviting alleyways and the domes of churches, and the way he uses panoramic opportunities to provide vistas of harbours, bays and island shorelines have inspired my own efforts to take photographs in Crete.

His panoramic photographs, which are a result of a lifetime of research, were considered avant garde when they were first published. It was the first time that photographs taken from an angle of 360 degrees were presented in compositions like these. It is so easy to forget how revolutionary and influential he has been now that we all have apps that allow us to take panoramic photographs with our iPhones.

Although Georges Meis has been taking photographs since he was a 14-year-old, he only became seriously involved in photography while he was studying to be an electrician. By 1973, he could no longer restrain his passion for photography. He went to Paris to study photography and cinema, and there he widened his views and the range of his photographic experience.

But, at the peak of his success, he realised he was still not fulfilled. He gave up the glamour and commercialism of fashion photography to concentrate solely on creating fine art photographic prints.

Ever since, he has walked the length and breadth of the Greek isles, seeking out hidden corners and the inconsequential details of everyday life. The warmth of the Greece and its people speak through a worn mat, a well-trodden stairway, an open door, colourful staircases, pots, walls and ripening fruit.

He became known for his series of postcards that became popular with tourists, and many of his photographs of Crete soon became famous as they were reproduced on postcards and posters and earned worldwide attention.

He attracted international attention for his unique presentations of the Greek islands – particularly Crete, Rhodes, the Cycladic and Aegean islands such as Santorini and Mykonos, and Dodecanese islands including Rhodes and Symi – and mainland Greece too. He has exhibited at international fairs in New York, Atlanta, Sydney and Birmingham.

He first saw Crete in the 1970s. Inspired by his early reading of writers such as Nikos Kanzatakis and Thanos Kondylakis and the music of Nikos Xylouris, who made him ‘feel Cretan since childhood,’ he approached Crete, ‘camera in hand – taking photographs wherever he went.’

This book is a fulfilment of promises first made almost three decades earlier to a Sfakiot shepherd, Manolis Nikoloudakis, and to Yiorgis Anyfantakis, a well-known photographer from Kastelli Kissamos. Both had encouraged the young Georges Meis when he was journeying throughout Crete after he had returned to Greece from Paris. Some of Meis’s black and white photographs taken at that time were included in the book – atmospheric images of elderly villagers and their day-by-day life: baking bread, tending animals, gossiping on the village bench.

After an introductory tour through Cretan mythology and Minoan civilisation, Georges Meis plunges into the wonderful colours and textures of the modern world. Many of the photographs are in a fold-out form, presented in angles as wide as 360 degrees, offering truly panoramic views from many different points. The colours are glorious, the shots superb, the locations varied and interesting – ranging from a detail of a stone step or a blazing geranium in a pot, through to a majestic vista of the Lefka Ori or White Mountains covered in snow.

Georges Meis freely confesses, however, that he has tinkered with some of his photographs to remove the more modern and less photogenic things he did not want in his pictures.

Two other coffee table books of his spectacular photographs – Thera or Santorini, Born from Tephra (2006) and The Diamonds of the Aegean (2007) – are also popular treasures for travellers to take home from their Greek holidays.

Then, 14 years after his first book on Crete, Meis produced his second album on the island, Crete – Mother of the European Civilisation. He says: ‘In essence, I would say this is something new. Something, perhaps more modern. However, the old exists side by side with the new.’

I often find copies of his work are hanging in rooms in hotel rooms and apartments I rent on holidays in Greece.

Last year, while I was browsing through the shop at the Fortezza in Rethymnon during my few weeks in Crete, I added to my collection of photographs and postcards by Georges Meis when I bought too ‘canvas-effect’ images based on his photographs taken in Santorini.

They evoke sweet memories of a relaxed, sunn,y summer afternoon about 30 years ago in Santorini, sitting on a balcony listening to Mozart, looking out across the caldera and watching the sun set beyond the neighbouring islands of Nea Kameni, Palea Kameni and Therasia. Now they are framed and hanging in the front room of Saint Mary’s Rectory in Askeaton. They have joined the other posters, photographs and paintings on these walls. And I am looking forward to the promise of another return journey to Crete this summer. 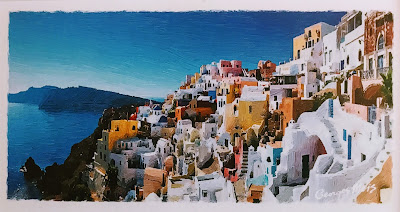 A second image of Santorini by Georges Meis, bought in Rethymnon last year (click on image for full-screen resolution) …

… is based on another of his well-known original photographs