The Wyatt family: influencing
generations of architectural
style on these islands 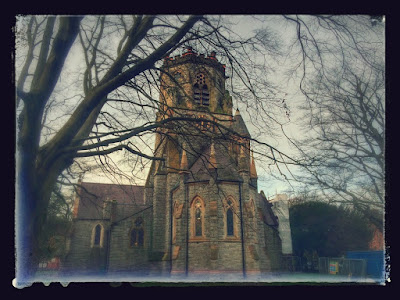 Thomas Henry Wyatt (1807-1880), the architect of Saint Bartholomew’s Church, Ballsbridge, was thoroughly versed in the principles of Gothic architecture and had a notable practice as the designer of more than 30 churches in England before he was commissioned to design Saint Bartholomew’s.

Wyatt probably received the commission through the patronage of the Herbert family who were the landlords of that part of Dublin. As the Earls of Pembroke, they give their name to a new township based on Ballsbridge. Wyatt worked closely with Sidney Herbert, younger brother of the Earl of Pembroke, who administered the family estates and donated the site for the ‘Pembroke District Church.’ Sidney Herbert was a brother-in-law of Thomas Vesey (1803-1875), the 3rd Viscount de Vesci, who had commissioned Wyatt to restore Abbeyleix House, Co Laois, and to design the parish church of Saint Michael and All Angels. 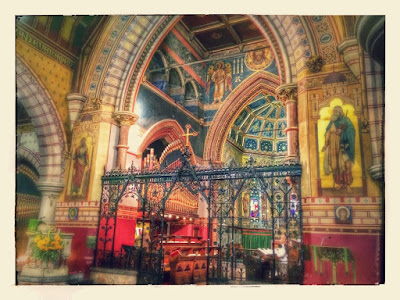 Although Thomas Henry Wyatt was born in Ireland, he is often regarded as an English architect, and the Wyatt family included five or six generations of influential English architects in the 17th, 18th and 19th centuries.

There are several interesting architectural dynasties in the 19th century, including the Hardwick, Barry, Pugin and Scott families. But the Wyatt family tree stretches back much further and the family stands out for the variety and influence of its work.

I was reminded once again of the Wyatt family’s prolific work and unique contribution throughout these islands on a recent visit to Weeford, a small village near Lichfield that has been associated with the Wyatt family for almost six centuries. 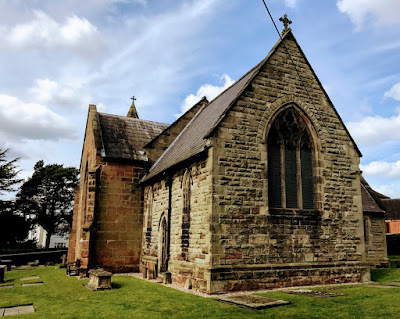 Weeford is four miles south of Lichfield, close to Toll 4 on the M6, but is in quiet rural Staffordshire. It is mentioned in the Domesday Book and it was one of the five original ‘prebends’ that paid ‘wax Scot’ or ‘Plough Alms’ to Lichfield Cathedral from the beginning of the 12th century. There was a church there for many centuries, and in Lichfield I recently bought a copy of the old parish registers for Saint Mary’s, dating back to 1562. 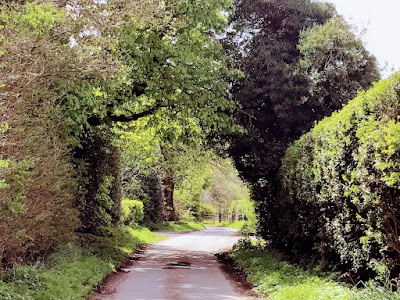 There were Wyatts in Weeford from before 1540, when William Wyatt was the father of Humphrey Wyatt, and the Wyatt architectural dynasty can be traced back to William Wyatt of Thickbroom, near Weeford, who died in 1572.

The dynasty was consolidated by a great number of marriages between cousins – over 20 in all, with eight in one generation alone. Wyatt family members often worked together in the architectural world. But the family also includes artists, painters, sculptors and journalists. 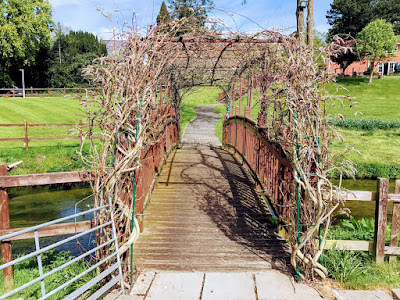 A footbridge over the Blackbrook River in Weeford (Photograph: Patrick Comerford, 2017)

Edward Wyatt, who was buried in Weeford in 1572, was the great-great-grandfather of Edward Wyatt (1632-1705), whose son, John Wyatt (1675-1742) from Thickbroom in Weeford, was the immediate ancestor of this outstanding architectural dynasty. 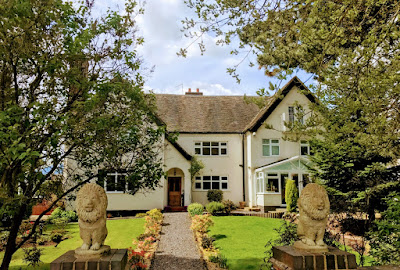 Weeford House is believed to date back to the 1600s (Photograph: Patrick Comerford, 2017) 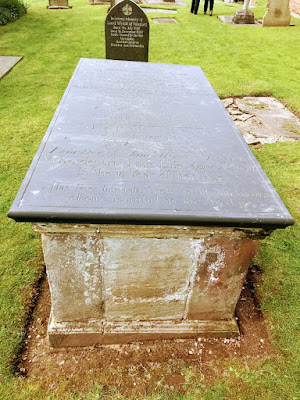 The grave of John Wyatt (died 1742) in the churchyard in Weeford (Photograph: Patrick Comerford, 2017)

This John Wyatt was the father of eight sons, the eldest of whom was John Wyatt (1700-1766), an inventor who was born near Lichfield and was related to Sarah Ford, mother of Dr Samuel Johnson. A carpenter by trade, he worked in Birmingham, where he developed a spinning machine that predated Richard Arkwright’s Spinning Jenny.

Another of John Wyatt’s eight sons, Benjamin Wyatt (1709-1772), was the first member of the family to become involved in building work. He was a ‘farmer, timber merchant, building contractor and sometime architect.’ In 1757, he built Swinfen Hall, between Weeford and Lichfield, for Samuel Swinfen and his wife.

Benjamin Wyatt had a large family. His son Joseph Wyatt (1739-1785), who married his cousin Myrtilla Wyatt, was the father of Sir Jeffry Wyatville (1766-1840). He changed his surname from Wyatt to Wyatville (frequently misspelled Wyattville in south Dublin housing estates), and I am aware at first-hand of his alterations to Sidney Sussex College, Cambridge, in 1832, including the gatehouse. 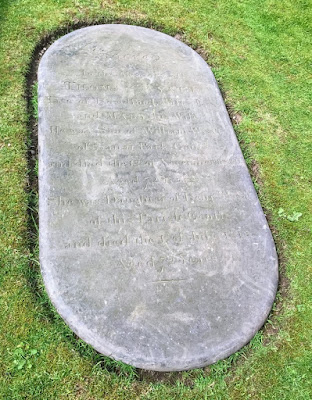 Benjamin Wyatt was also the father of James Wyatt (1746-1813), who was born at Blackbrook Farmhouse near Weeford, and became the most acclaimed and influential architect of his age. His first major building, the Pantheon in Oxford Street, London, was described by Horace Walpole as ‘the most beautiful edifice in England.’

In 1792, James became Surveyor General, which effectively made him England’s most prominent architect. He was also involved in works at Windsor Castle, Kew Gardens, the Radcliffe Observatory in Oxford, the restoration of the House of Lords and rebuilding Saint Mary’s Church, Weeford.

Wyatt rebuilt Saint Mary’s in 1802-1804 and donated the altar, pulpit, screens, font and ornamental furnishings. This James Wyatt was also involved in the restoration of Lichfield Cathedral in the 1780s, effectively saving the cathedral from collapse.

When Pugin first visited Lichfield in 1834, over 20 years after James Wyatt had died, he was taken aback by his refurbishment of the cathedral and declared: ‘Yes – this monster of architectural depravity, this pest of Cathedral architecture, has been here. need I say more.’

Pugin found the fabric of the cathedral had been mutilated by ‘the Wretch.’ Pugin dismissed another Lichfield architect, Joseph Potter, as ‘a pupil of the Wretch himself,’ saying he had ‘imbibed all the vicious propensities of his accursed tutor.’ On the other hand, John Betjeman has praised James Wyatt’s ‘symphony’ of ‘exquisite plaster, marble and painted details.’ 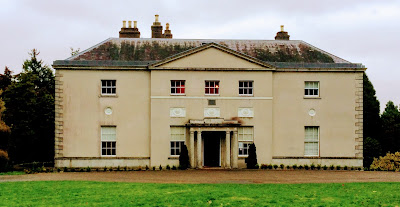 It interesting to note his broad and sweeping influence on the design of houses in towns such as Carlow, Bunclody (Newtownbarry), Co Wexford, and Rathkeale, Co Wexford, for example. 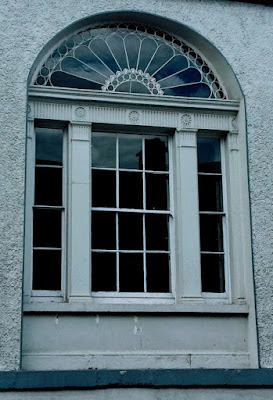 The large central Wyatt window of the Assembly Rooms in Carlow is a tripartite sash window with narrower sidelights and a segmental arch incorporating a large fan light. 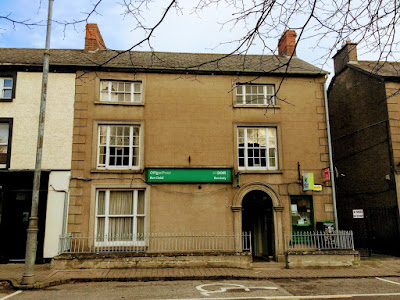 Wyatt windows can be seen in many buildings in Bunclody, including the former Comerford family home (now the Post Office), O’Connor and O’Connor, Lennon’s, and Redmond’s on the Mall, and Berkeley Mews on Market Square. The rectory, built in 1808, has windows that diminish in scale on each floor in the classical manner, producing a graduated visual impression, once again in a style inspired by James Wyatt. Wyatt windows can be son too in some of the many once-elegant Georgian townhouses in Rathkeale.

James Wyatt’s eldest son and pupil, Benjamin Dean Wyatt (1775-1852), built the Theatre Royal in Drury Lane, London, and was also the Surveyor at Westminster Abbey. Another son was the sculptor Matthew Cotes Wyatt (1777-1862).

The brothers of Benjamin Wyatt (1709-1772) included William Wyatt (1701-1772), the grandfather of Matthew Wyatt (1773-1831), who studied law instead of architecture. He moved briefly to Ireland when he was appointed a barrister and police magistrate in Roscommon.

TH Wyatt first began a career as a merchant sailing to the Mediterranean. But he to returned to the family’s tradition of architecture, and his early training was in the office of Philip Hardwick. He began to practice on his own as an architect in 1832, and became District Surveyor for Hackney, a post he held until 1861.

TH Wyatt was later described unfairly by John Betjeman as ‘one of the dullest Victorian architects.’ His practice at 77 Great Russell Street, London, was extensive with a large amount of work in Wiltshire, thanks to the patronage of the Herbert family, and in Monmouthshire through the Beaufort connection. Wyatt worked in many styles ranging from the Italianate of Wilton through to the Gothic of many of his churches.

Sidney Herbert, who had sent Florence Nightingale to the Crimean War, was the father-in-law of both the theologian Friedrich von Hügel and the composer Hubert Parry. He lived at Mount Merrion in south Dublin and was managing the Pembroke estates when the site for Saint Bartholomew’s was donated and Wyatt was commissioned to design the new church. 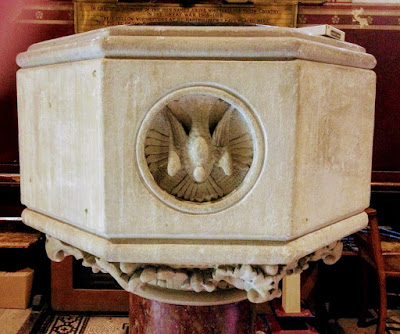 The font in Saint Bartholomew’s was a personal gift to the church by Thomas Henry Wyatt (Photograph: Patrick Comerford, 2017)

Wyatt’s other works in Ireland include the Church of Saint Michael and All Angels, in Abbeyleix, Co Laois, and he enlarged and altered Saint Mary’s Church in Gowran, Co Kilkenny. He also reported on the completion of the restoration of Saint Canice’s Cathedral, Kilkenny, and worked on several country houses, including Abbey Leix, Co Laois, for Lord de Vesci, Ramsfort, Co Wexford, for Stephen Ram, and Palmerstown House, Co Kildare, for the de Burgh family.

The font in Saint Bartholomew’s Church was his personal gift to the church. He died on 5 August 1880 leaving an estate of £30,000, and is buried at Weston Patrick. 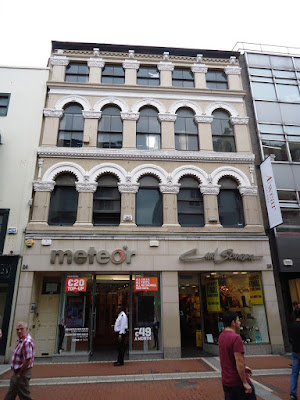 His younger brother and former pupil, Sir Matthew Digby Wyatt (1820-1877), was an art historian and the first Slade Professor of Fine Art at Cambridge. He designed Nos 24-25 Grafton Street, Dublin, between Duke Street and Ann Street, in the ‘Celtic revival’ style for William Longfield.

This building had one of the finest Romanesque façades until the ground floor was vandalised to make way for modern shopfronts. The original shopfront combined details from many churches and cathedrals, including the doorway in Saint Lachtain’s Church, Freshford, Co Kilkenny, crosses from Monasterboice, Co Louth, and the chancel arch and crosses from Saint Mary’s Cathedral, Tuam, Co Galway.

The first and second floors, which have survived, have two super-imposed Romanesque arcades. Above them, the third floor looks like a Venetian loggia. The rich details throughout these three floors include interlaced capitals, keystone masks, foliated string courses, and chevron or saw-tooth ornamentation.

In 1863, the Irish Builder hoped Wyatt would ‘stimulate many an Irish architect to ... recreate a national style,’ and praised the building for being ‘at once novel and successful.’ 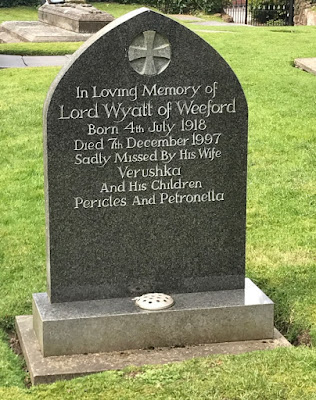 The grave of the journalist Woodrow Wyatt in Weeford Churchyard (Photograph: Patrick Comerford, 2017)

As I strolled through the churchyard at Saint Mary’s, Weeford, I came across more recent members of the Wyatt family, including the former amateur cricketer and captain of Warwickshire, Worcestershire and England, Robert Elliott Storey (Bob) Wyatt (1901-1995), and the politician, journalist and chairman of the Tote, Woodrow Wyatt (1918-1997), who was made Lord Wyatt of Weeford by Margaret Thatcher and who is also buried in the churchyard.

Across the country lane from the churchyard, the Wyatt dynasty is remembered in the Wyatt Pavilion, a popular wedding venue incorporated into the bar and restaurant in the old schoolhouse. 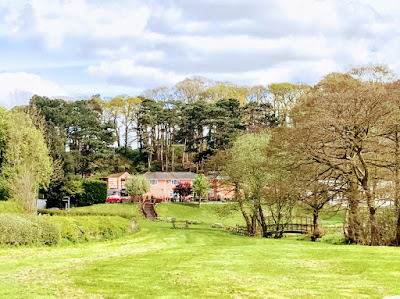 This feature was first published in the June 2017 editions of the ‘Church Review’ (Dublin and Glendalough) and the ‘Diocesan Magazine’ (Cashel, Ferns and Ossory)