A summer afternoon by
the river in rural England 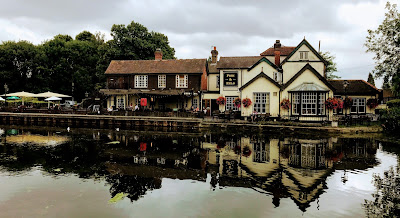 The Fish and Eels by Dobbs Weir, close to the Greenwich Meridian Line (Photograph: Patrick Comerford, 2017)

There was a Q&A section in The Guardian many years ago in which a reader posed a dilemma along these lines: is it better to live in an ugly house with a beautiful view, or in a beautiful house with an ugly view?

After the USPG conference ended in High Leigh yesterday, I had time on my hands before catching a late evening flight to Dublin, on my way back to Limerick and Askeaton.

Instead of catching the first available train to Stansted, I decided to go for a walk in the Lea Valley by the New River, which supplies water from Hertfordshire to North London.

I have described this before as a ‘Wind-in-the-Willows’ land, with houses whose gardens slope down to the river bank, where the branches of willows brush their tips against the surface of the river water.

It was a short walk of no more than 3 km or so, along the river bank, by Admiral’s Walk Lake across the railway line and crossing the Greenwich Meridian Line from West to East to Dobb’s Weir, where the Fish and Eels is a pretty pub on the river bank by the weir and on the borders of Hertfordshire and Essex.

To answer that question in The Guardian many years ago, the Fish and Eels is both pretty to look at from the weir and a pretty place to sit on a summer afternoon watching life on the river.

Like the Hedgehog in Lichfield, the Fish and Eels is a country pub in the Vintage Inns chain, with rural charm and rustic character. Its picturesque surroundings provided me with the perfect setting for a much-need afternoon break enjoying a glass of wine on the deck looking out onto the river.

The Fish And Eels dates back to the 17th century, when it was one of the inns known to Izaak Walton, the author of the Compleat Angler and the biographer of John Donne, Richard Hooker and George Herbert. Later it was owned by the Christie family brewery, and from here they sold Christie’s ales, brewed in Hoddesdon on the site of the Bell Inn on Burford Street.

This became a popular Victorian riverside inn and had had many landlords down the years. The most notorious or celebrated – depending on your point of view – was probably the Revd Samuel Thackeray who, was defrocked when he took to inn-keeping in the 1900s.

Thackeray shocked his clerical colleagues when he decided to become the landlord of the Fish and Eels, at Hoddesdon. Thackeray was educated at Cambridge and in 1872 he became the headmaster of Dartford Grammar School and curate of Bexley Heath. Subsequently he was the assistant chaplain at Tilbury Fort and held curacies at Saint Luke’s, Victoria Docks, All Saints’, Newington, and Christ Church, Greenwich.

Until 1906, he was the chaplain of the Gordon Road Workhouse, in Camberwell, and while he was there he applied for the licence at Fish and Eels Hotel.

It was said he seldom visited the workhouse, except on Sundays, despite being paid £110 a year, and left a manager in charge of his pub on Sundays. He later conducted services in his inn on Sundays, and sometimes on weekdays. He claimed he wanted to promote temperance, as opposed to total abstinence, and quipped that he had brought together the publican and the sinner.

‘I shall be the publican behind the bar, the sinners will be in front of me, and Christ, I hope, will be in the midst of us,’ he said on his arrival in 1907.

But the Bishop of Southwark and the Camberwell Guardians objected strongly and asked him to resign his chaplaincy. Thackeray declined, and guardians went to court for an order to remove him from office.

A Christian Socialist, he was a member of the Independent Labour Party and published a book, The Land and the Community, in which he argued for the nationalisation of land. Thackery was also an accomplished musician, and soon after becoming a publican he obtained a licence for music and dancing in his pub.

Owing to ill-health, he eventually gave up his tenancy of the Fish and Eels and later became a curate in East Peckham. 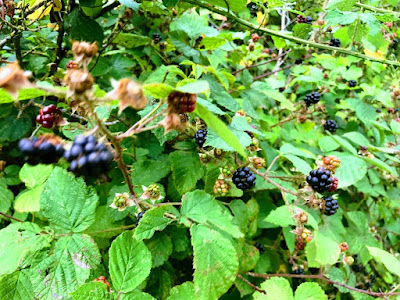 Blackberries coming to full fruit on the side of a country lane on the Meridian Line near Hoddesdon (Photograph: Patrick Comerford, 2017)

Meanwhile, the blackberries are ripening along the sides of the country lanes and the narrow roads in this corner of Hertfordshire and Essex.

Perhaps it is because of the late winter followed by the strong sunshine of recent weeks.

I grew up thinking of late August and early September as the time to go picking blackberries. The blackberry season in Britain and Ireland begins in June, but it reaches its peak in August and continues until the first frosts in November.

People in East England argue whether these parts of Hertfordshire and Essex are really part of East Anglia. The purists say Norfolk and Suffolk alone – the North Folk and the South Folk – constitute East Anglia; others are willing to extend the boundaries into Cambridgeshire and parts of Essex of Hertfordshire, albeit with an air of condescension.

But wherever that boundary falls, the countryside around the High Leigh Conference Centre, on the fringes of Hoddesdon and on the borders of Hertfordshire and Essex, provided some welcome opportunities for short country walks this during breaks from the USPG conference.

The fields are green and golden under the broad blue skies, and as I strolled through this rural idyll it was difficult to concede that I was just a short distance from the commuter belt for many people who work in Greater London.

There are woodlands and parks nearby, and as I walked through these fields of green and gold this week, I thought of the wheat and the tares that we are reading about in our Gospel reading next Sunday. And I wondered too how farming in England is going to survive after the calamity of ‘Brexit.’ 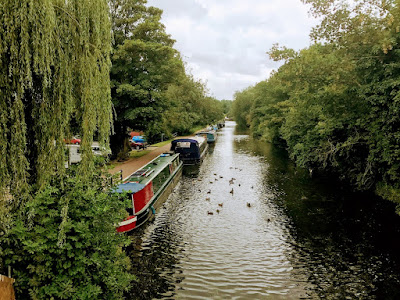 Boats on the river between Hoddesdon and Broxbourne, where East is East and West is West, and Essex and Hertfordshire are divided (Photograph: Patrick Comerford, 2017)