Are abandoned hotel and shops
signs of the times in Greece? 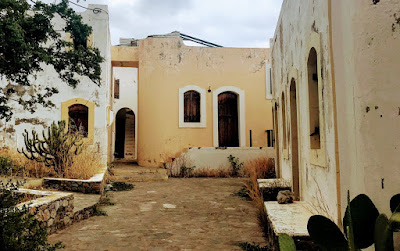 Wandering through an abandoned hotel in Koutouloufari (Photograph: Patrick Comerford, 2017)

Perhaps it is a sign of the times that two of the abandoned buildings standing on prominent sites in Koutouloufari are a former bank and an apartment block or hotel that was once popular with Irish tourists. 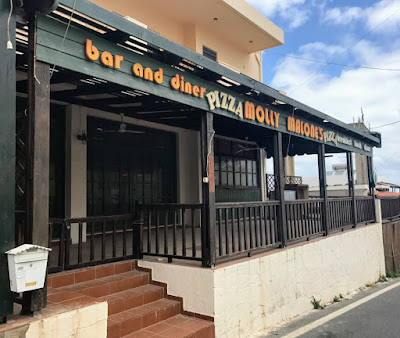 Molly Malone is under lock and key in Piskopianó (Photograph: Patrick Comerford, 2017)

According to one local businessman, another apartment block once popular with young Irish holidaymakers now only accepts Irish bookings from return customers and clients they are sure are middle-aged.

On the long resort stretch from Iraklion out to Hersonissos and beyond, fur shops that once catered solely for Russian tourists are feeling the pinch and some have closed. 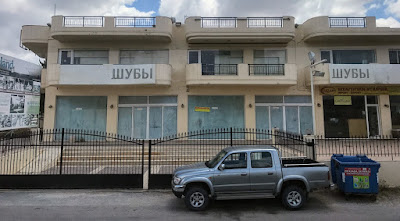 A closed fur shop near Gouves once catered for Russian tourists only (Photograph: Patrick Comerford, 2017)

Tourism has cushioned Crete against some of the worst consequences of the present economic crisis in Greece. Abandoned small hotels and shut shops in Crete are signs not so much of the economic problems facing Greece, but of changing patterns in tourism.

The latest figures show Greece is expecting a record-breaking 30 million tourists this year. The Tourism Minister, Elena Kountoura, said that summer bookings in some areas have risen by as much as 70%, and throughout Greece tourism earnings have grown by 2.4% or €23 million.

Tourism follows shipping as the second main source of foreign earnings in Greece, and accounted for eight out of 10 new jobs created in 2016. It is estimated that for every 30 extra tourists visiting Greece, one new job is created.

If Greece is picking up some figures in the Mediterranean tourist market, it is partly due to the falling popularity of Turkey following last year’s ‘coup’ and recent unsettling political developments, and because holiday packages in sunny resorts across North Africa, from Morocco and Tunisia to Egypt, have lost any attraction.

Although numbers are up throughout Greece, local businesses in Crete say there are fewer British tourists here because of the fall in the spending power of the Pound Sterling and uncertainty over ‘Brexit.’

Many tourists come as part of an ‘all-inclusive’ type of holiday. You can notice them because of their coloured wristbands, but package holidays like this mean they seldom wander beyond their resort complexes to eat or shop locally or to use local taxis. These hotel complexes provide much-needed employment. But when these tourists travel out, it is generally on organised coach tours that direct them to specific shops and chosen restaurants. 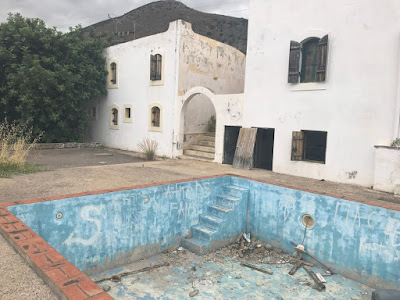 The empty swimming pool in the abandoned hotel in Koutouloufari (Photograph: Patrick Comerford, 2017)

Closed shops and apartment blocks are more than an eyesore for tourists. For local businesses, they take way from the attractions of a street that could be pretty and lively, they cause a loss of footfall and so mean fewer customers and dwindling profits; for landlords, they mean lower potential rents; for the Greek economy, they mean the loss of indicators that the present crisis may yet recover.

The abandoned apartment complex on a prominent corner in Koutouloufari was a sad place to wander around this week. The glass in many windows is shattered and broken, window shutters flap in the summer breeze. Inside, it is possible to catch a glimpse of the rusting furniture and fittings. The pool may never have been drained but simply dried out and is filling with rubble and dirt brought in by the changes in the weather.

As I climbed the empty stairs leading to nowhere, caught glimpses of the sea view through the arches, walked around the empty pool and peered into the apartments that must have provided many a tourist with happy memories, it felt like walking around a monastery that had long been abandoned.

I wondered if this hotel continued to crumble and decay would archaeologists in distant, future generations stumble across it and start looking for evidence of late 20th and early 21st century tourism in Greece: food wrappers and remains that indicate where they came from; furniture from the days before IKEA arrived in Crete; traces of how much foreigners ate and drank on holidays in Crete? 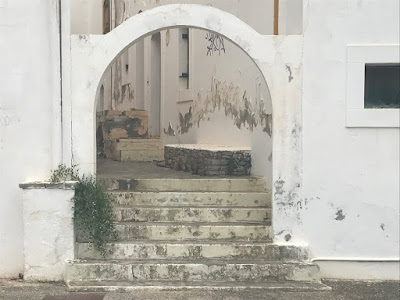 What future is there for an abandoned hotel in Koutouloufari? (Photograph: Patrick Comerford, 2017)