Three memorials provide
a mosaic of life in Tarbert 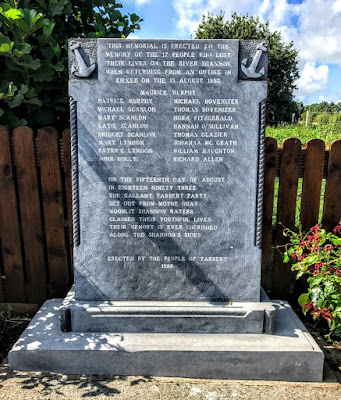 I was in Tarbert, Co Kerry, earlier today [15 August 2017] to take part in the annual memorial service for the Shannon Boating Tragedy in 1893.

I was invited to speak briefly and to lead some short prayers at the commemoration, which takes place each year at the Memorial Plaza in Tarbert.

For many years, 15 August was both a church holiday and a welcome holiday at the end of the harvest season in West Limerick and North Kerry, and at the end of the 19th century the new West Clare Railway offered an additional attraction for young workers planning a day off and a day’s fun.

We were reminded this morning how 124 years ago, on 15 August 1893, a party of young people from Tarbert – 10 men and seven women with an average age of 24 – decided to spend the day’s holiday in West Clare. It was a beautiful fine morning, and planned to cross the River Shannon in two boats sailing from Tarbert to Kilrush, to spend the day in Kilkee and to return later that evening on the same three-mile boat journey.

However, when they arrived at their point of embarkation at Coolnanoonagh there was no second boat for the crossing. There and then, the 17 day-trippers decided to crowd into Maurice Murphy’s 17-ft-long fishing boat. When they arrived at Moyne Quay in Co Clare, they expressed concern that the boat was overloaded and in an unseaworthy condition. The women complained that the hems of their skirts were getting wet, while the men described bailing out water with their boots.

Spirits were high, and the 17 enjoyed the afternoon in Kilrush and Kilkee. Towards evening, they returned to Moyne Quay for the journey back to Tarbert. Despite pleas and warnings, the whole party decided to make the return boat trip. There was a strong current and only two oars to steer the boat.

They appeared to have crossed the Tarbert Race, a strong choppy bit of current running down the middle of the estuary. But they were about 300 yards from the Tarbert shoreline and darkness was falling when disaster struck. Some of the group may have stood up in the boat looking out for their landing place, and this may have caused the boat to overturn, plunging them into the sea.

Despite frantic searches the next day, there was no sign of boat or bodies. By the end of September, 12 bodies had been recovered and buried in family graves. But five bodies were never recovered – the River Shannon remains their grave.

The Scanlon family of Kilpadogue suffered the greatest loss with the death of four of the eldest in a family of 14. Two inquests later found that the boat was overcrowded and not in a seaworthy condition. At least four of the 17 who drowned were Church of Ireland parishioners.

The 15 August 1893 boating tragedy remains the biggest loss of life on the lower River Shannon, and the memorial to the 17 who died was erected by the people of Tarbert in 1988.

In my short address, I recalled that Sunday’s Gospel reading (Matthew 14: 22-33) was about Saint Peter stepping out of the boat when he saw Christ walking on the water, panicked, and reached out his hand. I said we needed in the face of tragedies to reach out to those who suffer, and to those who carry memories, sadness and fears for generations. 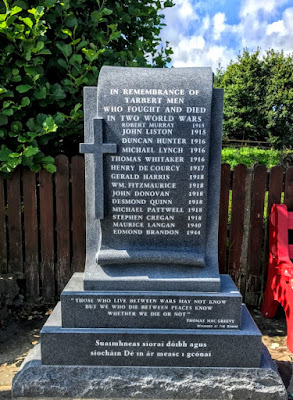 Beside the memorial for this tragedy, the War Memorial is a limestone memorial in scroll format remembering 14 young men from Tarbert who fought and died in two World Wars.

Ten of those who died in World War I (1914-1918) fought in Irish-based regiments and two men named fought in the US army. Seven of them were under 30, including two who enrolled in the Tralee-based Royal Munster Fusiliers.

Stephen Cregan, who was in the 308th US infantry regiment, may have been the last Kerry man to die in World War I. He was killed on 9 November 1918, two days before the Armistice was signed at 11 a.m. on 11 November 1918.

The lines of poetry at the base of the memorial were written by a local poet, Thomas MacGreevy (1893-1967) of Tarbert, who was wounded twice at the Somme offensive 100 years ago in 1917:

Those who live between wars may not know,
but we who die between peace know
whether we die or not.

Thomas MacGreevy was one of Ireland’s first modernist poets and was also Director of the National Gallery of Ireland (1950-1963). During World War I, he was a second lieutenant in the Royal Field Artillery. His training lasted nearly 20 months, and by Christmas 1917 he was at the Somme.

During his lifetime, MacGreevy wrote hundreds of articles on art, literature, dance, and religion, an unpublished novel, and several plays. Although he published only one volume of poetry during his lifetime, his strikingly original verse paved the way for younger poets and playwrights, such as Samuel Beckett, Brian Coffey and Denis Devlin, to emerge from under the shadow of WB Yeats.

In London, he met TS Eliot, who as the editor of The Criterion, who took him on as a reviewer. It was possibly Eliot’s poetry that had the most profound effect on MacGreevy’s own style. MacGreevy’s long ‘cab’ poem, Crón Tráth na nDéithe, is greatly indebted to The Waste Land.

A few steps away, the left of these monuments, a third memorial recalls the 1916 rising, with images of a harp and the seven signatories of the 1916. The inscription on the plinth includes a quotation from Tom Fitzgerald from Tarbert at this trial in 1918 for the drilling of rebels: ‘As long as the grass grows and water flows, there will be men to do and dare for Ireland.’

All three memorials represent tragic stages in the history of Tarbert. In their diversity, they help to present this Memorial Plaza as a mosaic of the past in Tarbert to those who live there today. 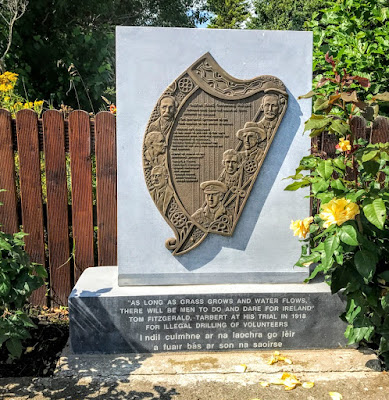 The 1916 Memorial at the Memorial Plaza in Tarbert (Photograph: Patrick Comerford, 2017)

This memorial was funded and erected by Tarbert Development Association and Tarbert Historical and Heritage Society .Commemoration took place on Sunday 18 December 2016. The unique Harp shaped bronze panel with portraits of the 1916 Proclamation signatories was designed by Liam Lavery and Eithne Ring and fabricated in France, The supporting natural limestone includes declaration made by Tom Fitzgerald,Tarbert at his trial in April 1918 for illegal drilling of Volunteers - 'As long as grass grows and water flows, there will be men to do and dare for Ireland'. I ndíl cuimhne ar na laochra go léir a fuair bás ar son na saoirse.