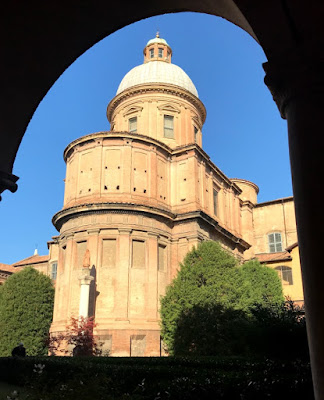 The Basilica of San Domenico, seen from the cloisters, is one of the major churches in Bologna (Photograph: Patrick Comerford, 2017)

Bologna has a rich collection of churches and basilicas, and one of the major churches in the city is the Basilica of San Domenico, which dates back to the arrival of Saint Dominic 800 years ago in the year 1218.

The basilica is visited regularly by pilgrims and tourists who come to visit this church because Saint Dominic is buried inside the church in the exquisite shrine of the Arca di San Domenico. As I walked around the church last week, there was a constant stream of schoolchildren being brought around by teachers and Dominican friars, and a stream of pilgrims constantly flowed in to see the shrine of Saint Dominic.

The shrine is the work of Nicola Pisano and his workshop and of Arnolfo di Cambio, and there are later additions by Niccolò dell’Arca and the young Michelangelo.

When Saint Dominic, Dominic Guzman, first arrived in Bologna in January 1218, he was impressed by its vitality of the city and recognised the importance of the university city.

The first house for Dominicans was established at the Mascarella church by Reginald of Orleans. But this house soon became too small for the growing number of friars, and in 1219 the brothers of Dominic’s Order of Preachers moved to the small church of San Nicolò of the Vineyards at the outskirts of Bologna.

Saint Dominic also moved to this church and the first two General Chapters of the Order of Preachers or Dominicans were held here in 1220 and 1221. Saint Dominic died in that church on 6 August 1221, and was buried behind the altar of San Nicolò.

Between 1219 and 1243, the Dominicans bought all the plots of land surrounding the church. After the death of Saint Dominic, the church of San Nicolò was expanded and a new monastic complex was built between 1228 and 1240.

The church was then extended and grew into the Basilica of Saint Dominic, which would become the prototype of many other Dominican churches throughout the world.

The basilica was divided in two parts divided by a ramp: the front part, or ‘internal church,’ was the church of the brothers, and the church for the faithful, or the ‘external church.’ The church was consecrated by Pope Innocent IV in 1251. 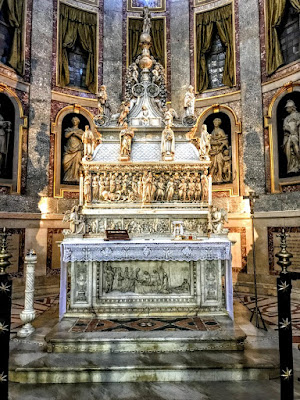 The remains of Saint Dominic were moved in 1233 from a place behind the altar to a simple marble sarcophagus. But most of the pilgrims could not see the new shrine, which was hidden by the numbers many people standing in front of it.

The need for a new shrine was identified, and in 1267 the remains of Saint Dominic were moved from the simple sarcophagus into a new shrine, decorated with episodes from the life of the saint by Nicola Pisano.

Saint Dominic’s chapel is the main chapel of the church. It has a square plan and a semi-circular apse, where the remains of the saint rest in the splendid Arca di San Domenico under the cupola which contains three sculptures by Michelangelo: Angel, Saint Proclus and Saint Petronius.

The chapel was built by the Bolognese architect Floriano Ambrosini, replacing the old gothic chapel from 1413, to match the splendour of the other existing chapels. It was decorated between 1614 and 1616 by important painters of the Bolognese school. 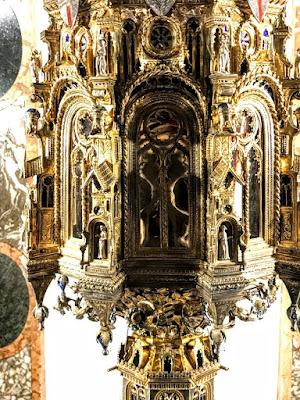 The relics of Saint Dominic in the richly-decorated shrine (Photograph: Patrick Comerford, 2017)

In the course of the next centuries, the church was enlarged, modified and rebuilt. New side chapels were built, a bell tower was added, the dividing wall between the two churches was demolished, and the choir was moved behind the altar. Then, in 1728-1732, the interior of the church was completely rebuilt in the Baroque style by the architect Carlo Francesco Dotti (1678–1759) under the patronage of Pope Benedict XIII, who was a Dominican.

The square in front of the church, now paved with pebbles, was also the original cemetery. In the middle of the square, a bronze statue of Saint Dominic (1627) stands on the top of a brickwork column. 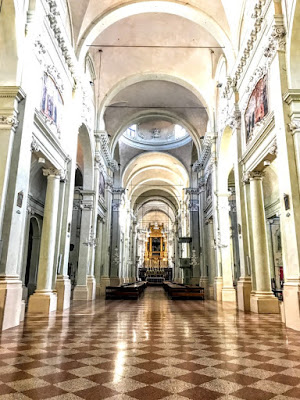 Inside the Basilica of Saint Dominic (Photograph: Patrick Comerford, 2017)