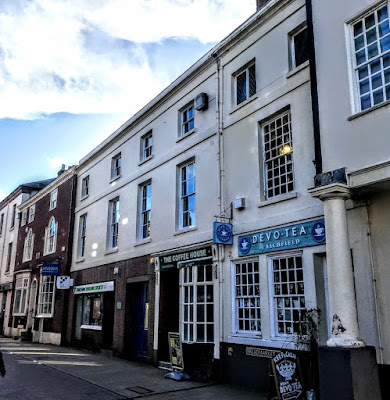 The site of the former Three Crowns on Breadmarket Street … a ‘lost local’ in Lichfield (Photograph: Patrick Comerford, 2018)

Like Samuel Johnson, I find myself staying in a variety of places, and last week I stayed in the Hedgehog Vintage Inn on the northern fringes of Lichfield, in a semi-rural setting on the corner of Stafford Road and Cross in Hand Lane. 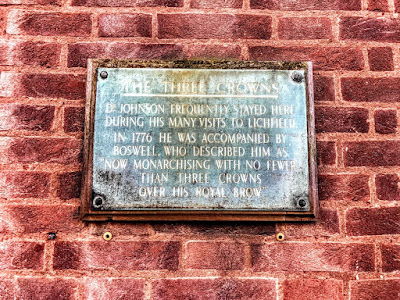 A plaque on the site of the former Three Crowns on Breadmarket Street remembers Samuel Johnson’s return visits to Lichfield (Photograph: Patrick Comerford, 2018)

During his many return visits, Johnson frequently stayed at the Three Crowns, which he described in 1763 as ‘not one of the great inns, but a good old fashioned one.’

A plaque on the wall recalls:

Dr Johnson frequently stayed here during his many visits to Lichfield. In 1776 he was accompanied by Boswell, who described him as ‘now monarchising with no fewer than three crowns over his royal brow’.

This three-storey Georgian building dates from the early 18th century, although there are many later alterations. Indeed, there may have been an earlier inn on this site, as the name Three Crowns refers not to the papal tiara but to the three crowns of England, Ireland and Scotland which were brought together in the early 17th century when James VI of Scotland was crowned James I in 1603.

The Three Crowns appears on Snape’s map of Lichfield in 1781, three years before Samuel Johnson died. The earliest known masonic lodge in Lichfield was formed around the corner at the Scales Inn in Market Street on 10 March 1784 and it became a ‘Moderns Lodge’ when it was constituted as Lodge of Unity on 24 July 1787 at the Three Crowns Inn on Breadmarket Street. The lodge had closed by 1811.

This has been a Grade II listed building since 1952. The notable features include the central carriageway, the paired doors, and the 20th century shop front in traditional style.

The last landlord was probably John Barber, and the Three Crowns closed for the last time in the 1960s.

The former inn is now divided into shops and offices, including a branch of the Yorkshire Building Society and the Coffee House – until recently a shopfront for the Lichfield Mercury – and Devot-Tea. A coffee shop and a tea shop, in their own ways, I suppose, continue the hospitality traditions of the original Three Crowns, and Samuel Johnson, of all people, knew the importance of a coffee shop.

Recently, the premises featured in City Life in Lichfield in October 2016 in a feature ‘A window on the past: the lost locals of Lichfield’ with a collection of photographs from the local history group ‘You’re probably from Lichfield Staffs if …’ 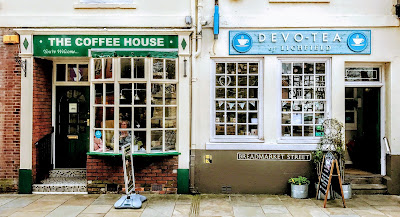