Following the Stations
of the Cross in Lent 12:
Longford 10: Jesus is
stripped of his clothes 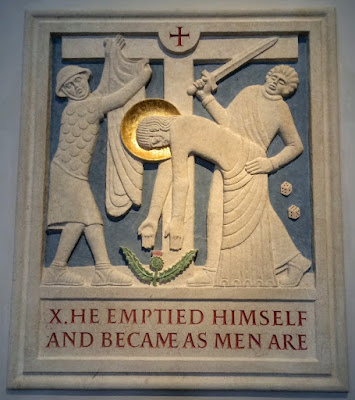 This is the Second Sunday in Lent [25 February 2018]. Later this morning, I am leading Morning Prayer in Castletown Church, Kilcornan, Co Limerick at 9.30, and presiding and preaching at the Parish Eucharist in Holy Trinity Church, Rathkeale.

Station 10: Jesus is stripped of his clothes

This station depicts a scene described in all four Gospels:

And when they had crucified him, they divided his clothes among themselves by casting lots; then they sat down there and kept watch over him (Matthew 27: 35-36).

And they crucified him, and divided his clothes among them, casting lots to decide what each should take. (Mark 15: 24).

When the soldiers had crucified Jesus, they took his clothes and divided them into four parts, one for each soldier. They also took his tunic; now the tunic was seamless, woven in one piece from the top. So they said to one another, ‘Let us not tear it, but cast lots for it to see who will get it.’ This was to fulfil what the scripture says,
‘They divided my clothes among themselves,
and for my clothing they cast lots’ (John 19: 23-24).

Clothes are often used to indicate a person’s social position, their place in society. This public stripping says that Jesus is being stripped of social standing, his place in society. He has become an outcast, despised by all.

At the foot of the Cross, the soldiers draw lots to divide his few remaining possessions. All four Gospel accounts speak of Christ’s clothes being divided by casing lots, but Saint John alone refers this to a passage in Psalm 22: 18.

Saint John too is alone is saying Christ’s tunic was ‘seamless, woven in one piece from the top’ (John 19:23). This may also refer to the High Priest’s robe, which was ‘woven from a single thread,’ without stitching. The naked Christ is the true High Priest.

Being stripped naked is one more step in the process of ultimate humiliation. Imagine the embarrassment of being so exposed. But remember too how Adam and Eve were expelled from Paradise, naked and ashamed. Once again, Christ shows that he is just like us.

In this station by Ken Thompson in Saint Mel’s Cathedral, Longford, one solider is beating Christ with a sword, while the other is holding up his clothes, as if to check whether the tunic has any value, while turning his face away in disgust.

The two dice on either side indicate they are going to cast lots, but did you notice how they have been cast wrongly? The opposite faces of dice always add up to 7, (1/6, 2/5, 3/4); but this is impossible in both cases in this depiction. The die is cast, but everyone is a loser.

The daffodils that we have seen bursting out in previous stations as a sign of hope have now been replaced by thorns and a thistle. The artist here is drawing once again on the Prophet Hosea: ‘… the sin of Israel shall be destroyed. Thorn and thistle shall grow up on their altars’ (Hosea 10: 8).

The inscription in terracotta capital letters at the bottom of this Station reads: ‘He Empties Himself and Became as Men Are.’ This refers to a passage in Saint Paul’s Letter to the Philippians, where he says ‘Christ Jesus, who, though he was in the form of God, did not regard equality with God as something to be exploited, but emptied himself, taking the form of a slave, being born in human likeness. And being found in human form, he humbled himself and became obedient to the point of death – even death on a cross’ (Philippians 2: 6-8)

The Collect of the Day (the Second Sunday in Lent):