A first-time visit to
a chocolate factory 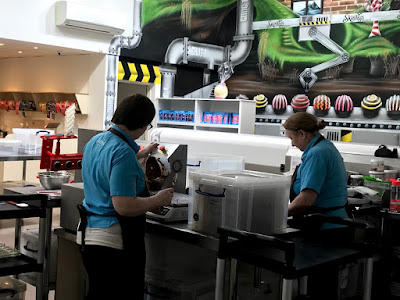 During my visit to Ballinskelligs, Co Kerry, at the end of last week, I also visited Skelligs Chocolate, Ireland’s only open-plan chocolate factory.

The factory is on the Skelligs Ring, which was named in The Lonely Planet’s ‘Top 10 Regions’ to visit in 2017.

The factory is just a few steps away from Saint Finian’s Bay and looks out to Skellig Michael, the UNESCO World Heritage site that was a backdrop in the latest ‘Star Wars’ movie, The Last Jedi.

This open-plan chocolate factory welcomes visitors to come and see the award-winning chocolates being made, to taste the chocolate and to learn about chocolate-making.

The first factory opened in 1996, with two small production rooms, one for making chocolate and the other for packing. ¬It was a big move from a kitchen table to that factory, starting with a staff of four, one chocolate wheel machine and a passion for chocolate making that survives to this day.

Somehow, people found the factory in this remote location and in May 2010 the company extended the factory to deal with the increased demand from shops and visitors.

However, tragedy struck just as the new factory was working to full capacity to prepare for the 2010 Christmas season. The factory was burned to the ground, but no one was hurt or injured.

The business received great support from family, friends and customers and in February 2011 a temporary production facility was set up nearby in Cahersiveen.

After a tough year of fighting for planning permissions, the business returned to the home of Skelligs Chocolate within a week of the first anniversary of the fire, and the new state-of-the-art production facility opened in 2012. The first premises were about 1,200 sq ft; the new one is 6,500 sq ft. 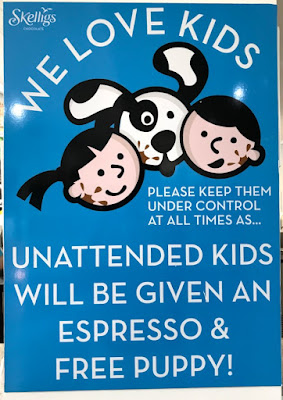 The philosophy at Skelligs Chocolate is to keep it simple and to make sure everyone has the best possible chocolate experience. The company aims to make the factory as pleasant to visit as it is to work in and is constantly trying to improve the visitor experience.

This is an actual working chocolate factory with the only ‘open plan’ chocolate production facility in Ireland. It was nominated by Failte Ireland as one of the ‘50 secret destinations of the Wild Atlantic Way.’

This was my fist visit to a chocolate factory. After gift buying and before leaving, we had coffee in the Puffin Café looking across at the Skellig Islands. We then made our way down to Saint Finian’s Bay for a walk on the beach in the small cove and another view of Skellig Michael before continuing on to Valentia Island and Cahersiveen. 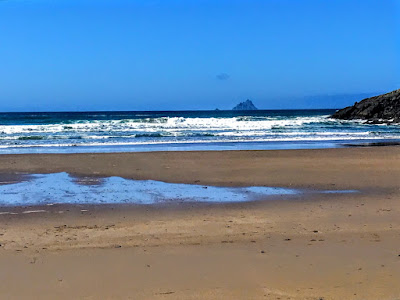 A walk on the beach, with a view of Skellig Michael, at Saint Finian’s Bay, beside Skelligs Chocolate (Photograph: Patrick Comerford, 2018)