A few days in the south
of France, near Dali’s
‘Centre of the Universe’ 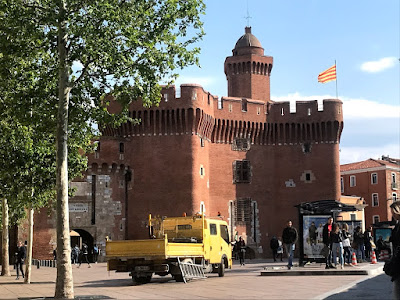 The Castillet, the main city gate, is a 14th century fortress that survived when the walls of Perpignan were razed in 1904 (Photograph: Patrick Comerford, 2018)

I am staying in Sainte-Marie-la-Mer in the south of France for a few days, enjoying a few days in this coastal town near Perpignan until Saturday.

Although I have been to Paris half-a-dozen times or more in the past, this is my first time back in France since 2006, and my first time to visit the South of France.

I arrived at Perpignan–Rivesaltes Airport late yesterday, and I am staying in Sainte-Marie-la-Mer. My first impressions in Perpignan and on the road to Saint-Marie were of the vineyards, the bilingual signs in French and Catalan, and how the local flag, flown everywhere, is similar to the Catalan flag with its stripes of bright yellow and red.

Perpignan is Perpinyà in Catalan, the people of the city are Perpignanais(e) in French and Perpinyanés(a) in Catalan, and Sainte-Marie is known in Catalan as Santa Maria la Mar.

Perpignan was once the capital of the province and County of Roussillon, known as Rosselló in Catalan, and the continental capital of the Kingdom of Majorca in the 13th and 14th centuries, and later was part of the County of Barcelona.

Perpignan was besieged and captured by the French during the Thirty Years’ War in September 1642, and was formally ceded by Spain 17 years later in the Treaty of the Pyrenees. Ever since, it has remained a part of France, and it is the southernmost city in metropolitan France.

Perpignan was the Capital of Catalan Culture in 2008, and it is said that 34% of people in this area speak Catalan, and a further 21% understand it.

The Spanish surrealist Salvador Dalí declared the city’s railway station is the ‘Centre of the Universe’ after he experienced a vision of cosmogonic ecstasy there in 1963. He claimed he always got his best ideas sitting in the waiting room there. His painting La Gare de Perpignan commemorates his vision there on 19 September 1963.

Some years later, he declared that the Iberian Peninsula rotated precisely at Perpignan station 132 million years ago, an event he commemorated in his painting Topological Abduction of Europe – Homage to René Thom (1983).

Above the station is a monument in Dali’s honour, and across the surface of one of the main platforms is painted, in big letters, ‘Perpignan Centre du Monde’ (‘Perpignan Centre of the World’).

I wonder whether he knew that this also an important centre for rugby in France?

On my way to Sainte-Marie-la-Mer late yesterday, three of us stopped to visit some vineyards, including Domaine Lafage, and later we had dinner in Canet-en-Roussillon (Canet de Rosselló), which is one of the earliest coastal resorts in the south of France and which is twinned with Maynooth.

I may not be at the centre of the universe, but there is a whole new world to explore now and when I leave on Saturday morning.