A small church in Georgioupoli
is a reminder of Saint Barbara 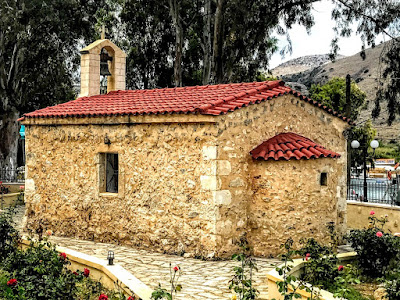 The two main churches in Georgioupoli are the large parish church dedicated to the Ascension (Analipsi), with its splendid flurry of frescoes filling the walls, the ceilings and the dome, and the tiny white-wash chapel of Aghios Nikolaos, at the end of small, rocky breakwater between the harbour and the beach and a must-visit place for every tourist in this resort town.

There are other churches and chapels here, including the archaeological site at Aghios Georgios (Saint George), and some tiny private chapels.

Tucked into a small corner near the harbour is the older, small, traditional Church dedicated to Saint Barbara (Αγία Βαρβάρα).

Few tourists notice this church. Perhaps they think it is closed, but a gentle push on the church door leads into a peaceful and calming space for prayer and reflection. 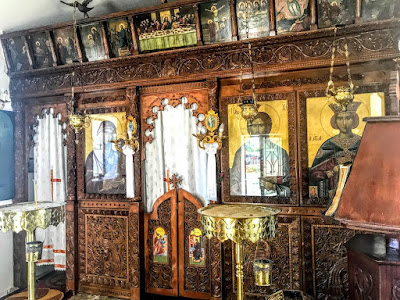 Inside the Church of Saint Barbara in Georgioupoli (Photograph: Patrick Comerford, 2018)

The walls and the iconostasis or icon-screen of this small are covered with a large number of icons of Saint Barbara, and a lamp with incense is kept burning before her shrine.

Saint Barbara was martyred in the Syrian city of Heliopolis during the reign of the Emperor Maximian (305-311).

She is a popular saint in Crete, and for 30 years I have been familiar with Saint Barbara’s Church in Rethymnon, close to the cathedral in the old town. 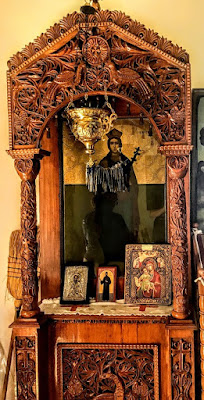 The saint’s shrine in the Church of Saint Barbara in Georgioupoli (Photograph: Patrick Comerford, 2018)

Her relics were moved to Constantinople in the sixth century, and 600 years later they were moved to Kiev by Princess Barbara, daughter of the Byzantine Emperor Alexius Comnenos and wife of the Russian Prince Michael Izyaslavich.

Her relics now kept in Saint Vladimir’s Cathedral in Kiev, where he is commemorated each Tuesday.

An icon of Saint Barbara in the church in Georgioupoli (Photograph: Patrick Comerford, 2018)

Saint Barbara is commemorated in the Church Calendar on 4 December. She is the patron saint of armourers, artillery troops, military engineers, miners and others who work with explosives because of her old legend’s association with lightning, and also of mathematicians.

As thunder rolled across Georgioupoli briefly this afternoon, I wondered whether these association also explained some of the paraphernalia in the gardens of Aghia Varvara. 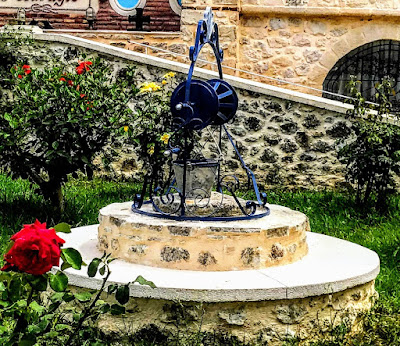 In the gardens of Saint Barbara’s Church in Georgioupoli (Photograph: Patrick Comerford, 2018)