Are these ‘Days of
Wine and Roses’ in
the rectory garden? 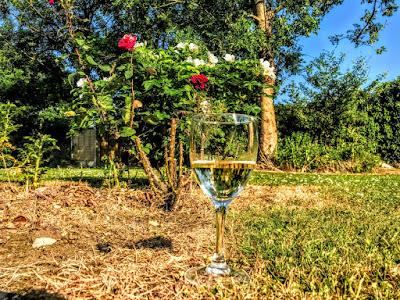 ‘Days of Wine and Roses’ … a summer evening in the rectory garden in Askeaton (Photograph: Patrick Comerford, 2018)

After a busy day yesterday, two of us sat out in the rectory garden until late in the evening [27 June 2018], while the temperature remained in high 20s. We sat there for what seemed like an interminable evening in the sunshine, sipping wine, admiring the roses, reading the papers, enjoying the sunshine, and occasionally getting up only to stroll through the garden gate and into the fields behind the rectory, where the grass has been cut and the hay has been rolled into bales.

These are unusual summer days for west Co Limerick. It had been a busy day, speaking at a public event in the Desmond Castle, Newcastle West, and then working throughout the afternoon with a film crew at Saint Mary’s Church, Askeaton.

The temperatures rose beyond 30, making these hotter days than those in Crete a week ago.

And, as the evening seemed to stretch on endlessly, we sat there, in the warm evening sunshine, basking in the sun-induced laziness, I began humming to myself the Andy Williams version of ‘Days of Wine and Roses,’ a popular song from the 1962 movie of the same name.

The film Days of Wine and Roses was directed by Blake Edwards with a screenplay by JP Miller (1919-2001), adapted from his own 1958 Playhouse 90 teleplay of the same name.

The movie was produced by Martin Manulis, with music by Henry Mancini, and stars Jack Lemmon, Lee Remick, Charles Bickford and Jack Klugman. But, despite the title, and despite what I once thought the song means, this is no romantic move. Instead, it depicts the downward spiral of two average Americans who succumb to alcoholism and fail to deal with their problems.

The music was written by Henry Mancini with lyrics by Johnny Mercer. The song is composed of two sentences, one for each stanza. They are each sung as three lines:

(The lonely night discloses) Just a passing breeze filled with memories
Of the golden smile that introduced me to
The days of wine and roses and you-oo-oo.

The best-known recordings of the song are by Billy Eckstine in 1961 and Andy Williams in 1963. But several other recording artists have also recorded it, including Shirley Bassey, Frank Sinatra, Ella Fitzgerald, Perry Como and Tony Bennett, and the song has since become a jazz standard.

They are not long, the days of wine and roses:
Out of a misty dream
Our path emerges for a while, then closes
Within a dream.

Dowson coined such vivid phrases as ‘Days of Wine and Roses’ and ‘Gone with the wind’:

I have forgot much, Cynara! gone with the wind,
Flung roses, roses riotously with the throng,
Dancing, to put thy pale, lost lilies out of mind;
But I was desolate and sick of an old passion,
Yea, all the time, because the dance was long: I have been faithful to thee, Cynara! in my fashion.

This earlier poem was first published in The Second Book of the Rhymer’s Club in 1894, and it is also the source of the phrase ‘I have been faithful ... in my fashion.

Margaret Mitchell, touched by the ‘far away, faintly sad sound I wanted’ of the third stanza’s first line, chose words from that line as the title of her novel Gone with the Wind.

In a useful piece of information as the World Cup moves on to the next stages, the Oxford English Dictionary says Dowson provides the earliest use of the word ‘soccer’ in the written language – although he spells it ‘socca,’ presumably because it did not yet have a standard written form.

Both Mancini and Mercer said that once they had the title, the words and music rolled out and could not be written fast enough. Andy Williams sang the song on the film songtrack, winning a gold record, while Mancini and Mercer won a Grammy for Song of the Year and the Academy Award for Best Original Song. 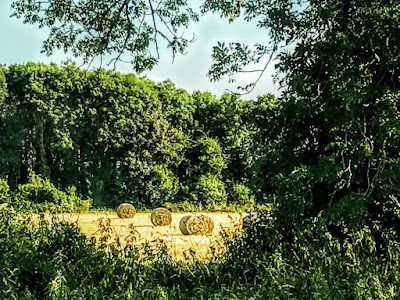 ‘Like a child at play through a meadow land’ … the summer fields behind the rectory garden in Askeaton (Photograph: Patrick Comerford, 2018)

A beautiful, thoughtful and illuminating blog-essay, Patrick.
I had read somewhere that it was Margaret Mirchell's publisher who chose the title "Gone With Wind", and that the author's original effort had been "Tomorrow Is Another Day") the book's last line. Perhaps with the encouragement of her publisher she came up with the former.