Ardagh: a village built
as a ‘Moral and Social’
improvement for tenants

The Village Green at the centre of Ardagh … the village was planned and laid out by the Fetherston family of Ardagh House (Photograph: Patrick Comerford, 2018)

The present lay-out and streetscape of Ardagh, Co Longford, are due mainly to the vision of Sir Thomas John Fetherston, and his aunt, the widowed Frances (Solly), Lady Fetherston.

In 1862, aunt and nephew commissioned the Dublin-based architect James Rawson Carroll (1830-1911) Carroll was known mainly for his church designs, carried out various works at Ardagh and Ardagh House for Sir Thomas Fetherston between 1860 and 1865.

Carroll was commissioned to build much of the present village as a tribute to Sit Thomas’s uncle and Lady Fetherston’s late husband, Sir George Ralph Fetherston (1784-1853) of Ardagh House, the third baronet. The houses replaced a scattering of mud cabins and primitive houses in which the local population had lived, even after the Famine years.

Ardagh village is built mainly of cut stone houses clustered around the Village Green. The focal point of this village green is the beautiful clock tower, which was completed by Carroll in 1863 for Lady Fetherston to commemorate her late husband.

A typical cut-stone estate cottage in the centre of Ardagh (Photograph: Patrick Comerford, 2018)

The clock tower is a free-standing, limestone, four-stage clock tower, dated 1863. It has an octagonal stepped base of coursed ashlar limestone with clasping buttresses rising to crocketed pinnacles.

The clock tower has a pointed, trifoliated wall plaque, with roll moulding that has a decorative label stop, engaged colonnettes, and date and lettering in low relief commemorating Sir George Ralph Fetherston.

There are pointed trifoliated window openings with roll mouldings that have decorative label stops and quarry glazing. The pointed arch entrance opening has a timber battened door with roll moulding. The base of the square profile gabled clock stage has quatrefoil decoration.

There is a clock face on the east elevation, and multifoil window openings with quarry glazing elsewhere. The carved decorations include colonnettes, inscribed banners, and heraldic shields. The gabled base of the spire has paired open trifoliated lancets, colonnettes and crockets.

The clock tower stands in landscaped surrounds with wrought-iron railings and a gate set in gabled ashlar limestone piers and a low boundary wall with a coursed limestone plinth. 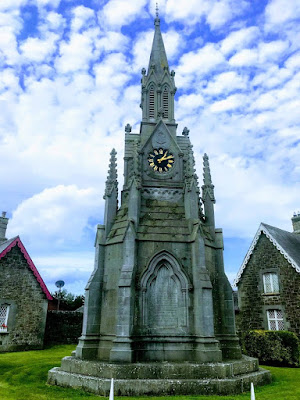 The clock tower in the centre of Ardagh village (Photograph: Patrick Comerford, 2018)

This is a complex and richly decorated Gothic style memorial clock tower and a symbol of mortality. The stone masonry and craftsmanship are of the very highest quality. It is the focal point in Ardagh, adding a high level of artistic heritage in the centre of the village. Its Gothic style is ecclesiastical in character, an appropriate architecture for a symbol of mortality.

An inscription dedicates the village of Ardagh to the memory of Sir George Fetherston and commemorates his ‘life-long devotion to the moral and social improvement of his tenantry.’

The stone carving is said to be the work of a Carroll family from Co Wicklow, who had a limestone monument business.

The boundary walls, piers and the highly ornate wrought-iron work are also noteworthy features that further elevate the importance of this fine composition.

The main inscription on the clock tower reads:

In Remembrance of Sir George Ralph Fetherston Baronet and of his Life Long Devotion to the Moral and Social Improvement of his Tenantry this Clock Tower and the Surrounding Buildings were Erected and the Site Wheron they Stand Purchased by Frances Elizabeth his Widow. 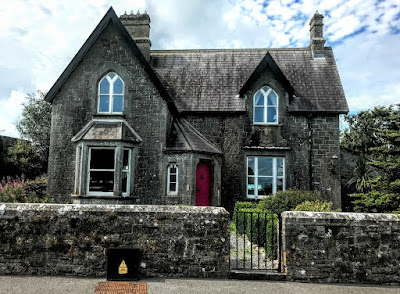 Melrose, the former steward’s or agent’s house in Ardagh is a detached, three-bay, two-storey house built on an L-shaped plan in 1863 (Photograph: Patrick Comerford, 2018)

A ‘Travellers’ Rest’ seat was also built into the churchyard wall for use by passing travellers, and a village pump stands in the centre of the village green stands.

On the road leading from the village green stands three impressive houses served as the village courthouse and RIC barracks, the rent office and agent’s house, and the post office.

Other buildings include the Demesne National School, built in 1892, which is now the local Community Centre, and the early 19th century, three-storey rectory, built in 1823 at a cost of £1,300.

Ardagh is one of only a few remaining model estate villages in Ireland. Due to its distinctive architecture as a planned estate village and because it is so well preserved, it has been designated as a Heritage Village. 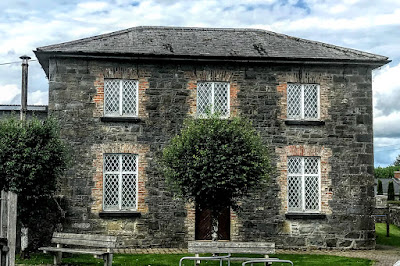 Great article but the cut stone cottage referred to is not one of the original cottages. It is the Garda station and was built in the 1980/1990 period.

They are referring to a different building. The original barracks at a different location to the new one.