Ardagh House, built in 1730 and rebuilt in the 19th century, is at the heart of Ardagh in Co Longford (Photograph: Patrick Comerford, 2018)

While I was visiting the church sites in Ardagh last week – including the site of old Saint Mel’s Cathedral, the ruins of a mediaeval church, and the 200-year old Saint Patrick’s Church – I was constantly aware of the presence of neighbouring Ardagh House.

The arrival of the Fetherston family in Ardagh in the early 18th century had a major influence on the life and character of this Co Longford village for the next two centuries.

The Fetherston family built Ardagh House as its residence, laid out Ardagh as a planned village, built many of the houses and cottages for their estate workers, helped to rebuild the parish churches, and also supplied the clock tower, one of the most visible landmarks in the village.

The first members of the Fetherston family moved to Ireland by 1651. Thomas Fetherston bought a house in Ardagh and 235 acres of land, from the Farrell family around 1703.

Around 1730, he built Ardagh House, which is now an eight-bay, two-storey – but originally three-storey – over-basement house. The house was standing in 1744-1745, when Oliver Goldsmith (1728-1774) visited Ardagh on his way between Ballymahon and Edgeworthstown. Ardagh House was so magnificent that the young Goldsmith mistook it for an inn. The Featherston family played along with his mistake and pretended to be the servant girls.

Goldsmith’s adventure at Ardagh House inspired the plot of his most successful play, She Stoops to Conquer, although Samuel Lewis states in 1837 that the play in question is Mistakes of a Night.

Thomas Fetherson died in 1749. His eldest son, the Very Revd John Fetherson, was Dean of Raphoe, while his youngest son, Sir Ralph Fetherston (1731-1780), who was MP for Co Longford (1765-1766), inherited Ardagh House and received the hereditary title of baronet in 1776.

Ardagh House and the title passed in 1780 to Sir Ralph’s son, Sir Thomas Fetherston (1759-1819), the third baronet. His son, Sir George Ralph Fetherston (1784-1853), then became the third baronet. He was educated at Trinity College Cambridge and was MP for Co Longford (1783-1800) and High Sheriff of Co Longford (1834). Sir George and his wife, the former Frances Solly, were mainly responsible for rebuilding Ardagh House, and laying out Ardagh as a planned, estate village. 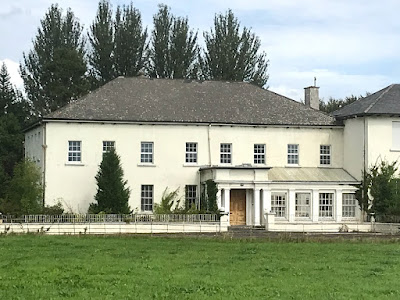 John Hargrave (1788-1833) carried out ‘trifling alterations for Sir George Fetherston’ at Ardagh House in 1826, and the house would be altered again in 1863.

Ardagh House is set in landscaped surroundings to the north of Ardagh, and beside the ecclesiastical sites associated with Saint Patrick, Saint Mel and Saint Brigid.

Although Ardagh House was first built in the early 18th century, the house now has a predominantly early-to-mid 19th century appearance. The elegant porch and conservatory, and the former ballroom block to the east, were also added at this time.

The house has a single-bay porch with a tetrastyle porch to the centre of the front façade on the south side, adjoined to the east by a four-bay, single-storey conservatory to the east.

The house also has a three-bay, two-storey block, formerly a ballroom, that is attached as the south-east end, and there are multiple extensions to the east and the north-east of the house. There are gates and gate lodges to the west and the south-east, and the adjoining complex of outbuildings includes a stable block.

The estate walls surrounding Ardagh House were built mostly during the famine in the 1840s, when they provided relief work for the local population. Two road entrances from the village led into the grounds of Ardagh House. These entrances are beautifully built of cut stone with wrought iron railings and each with a gate lodge.

When Sir George died in 1853, he was succeeded briefly by his youngest brother, the Revd Sir Thomas Francis Fetherston (1800-1853), as fourth baronet, but he died six weeks later.

His eldest son, Sir Thomas John Fetherston (1824-1869) then succeeded to the estate and title. He carried out major work in extending the original house and in re-designing Ardagh village as a tribute to his late uncle Sir George. This work involved moving the main street away from the front of the house to its present location, the creation of the village green and building of most of the present houses. Much of this work was carried out with his widowed aunt, Frances Elizabeth, Lady Fetherston, who built the Clock Tower beside the Village Green in memory of her husband.

The Fetherston family developed much the village of Ardagh, mainly in the 1860s, and this work continue after Sir Thomas died on 21 September 1869.

During this period, the Dublin-born architect James Rawson Carroll (1830-1911) carried out extensive ‘alterations, repairs and additions’ for Sir Thomas Fetherston in 1860-1864.

Carroll was articled to George Fowler Jones, the architect of Cloghanadfoy Castle, Co Limerick. Carroll set up his own practice at 180 Great Brunswick Street, Dublin, in 1857. By the end of 1870 he had been appointed architect to the United Diocese of Kilmore, Elphin and Ardagh.

Carroll had a considerable country house practice as well as designing several churches and other public buildings. In 1882, he took his nephew and pupil John Howard Pentland into partnership.

The last of the Fetherston baronets was Sir Thomas’s only son, the Revd Sir George Ralph Fetherston (1852-1923), who was still in his teens when he inherited the title and estates. He was in his mid-20s when he entered Salisbury Theological College to prepare for ordination in the Church of England. He served as a curate in Tenby and Worcester, and for six years was the Vicar of Pydeltrenthide in Dorset.

During World War I, he was an honorary chaplain to Millbank Military Hospital in London. He was one of the first two Anglican priests to serve as sheriff in his county, which was not permitted before the disestablishment of the Church of Ireland. As High Sheriff of Co Longford in 1897, he received the Diamond Jubilee Medal and preached the Jubilee Sermon marking Queen Victoria’s jubilee in Saint Patrick’s Church, Ardagh.

His interests and hobbies included music, travel, cycling, fishing, photography, collecting ancient china and stamps, bird-watching and the study of insects. He travelled widely in Europe, Africa, North and South America, and was a Fellow and Vice-President of the Guild of Church Musicians and of the Victoria College of Music. He composition 150 alternative tunes for Hymns Ancient & Modern, and various chants, songs and other music.

The Fetherston estate extended to about 11,000 acres by 1900. But Sir George took little interest in the Ardagh estate, which was administered by trustees. For example, the plasterwork at Ardagh House was carried out in 1877 on behalf of the Fetherston trustees.

In 1903, Sir George entered into agreements with over 300 tenants to sell to them the freehold of their farms under the Irish Land Act 1903.

The Ardagh estate was not acquired by the Irish Land Commission, but instead it advanced the money needed by the tenants and others, and the holdings were vested in them by the Commission in 1922-1923. An area of 427 acres of bog land was vested in trustees for the use of buying new freeholders.

Sir George continued to own Ardagh House and some of the original demesne land. An attempt to destroy Ardagh House by fire in 1922 during the Irish Civil War may have been a local expression of dissatisfaction with the allocation of estate land or an effort to hasten the sale of the last remnants of the estate. Manuscripts written in Irish were salvaged from the flames of Ardagh House.

Sir George died in a nursing home in Worcester in 1923. He was buried in Tenby, the South Wales where he had been a curate. He had never married, and when he died the title of baronet died with him.

Ardagh House was bought by the Sisters of Mercy in the early 20th century, and from 1927 they used it as a training college. But a fire in 1948 resulted in the house being reduced to two storeys in height.

Nevertheless, Ardagh House remains a substantial former country house and retains much of its early character. Despite the fire, and apparent neglect in recent years, the surviving fabric includes some timber sliding sash windows, console brackets to the porch, plasterwork and fireplaces. Ardagh House continues to form the centrepiece of a large group of related sites and is an important element of the social history of Ardagh and Co Longford. 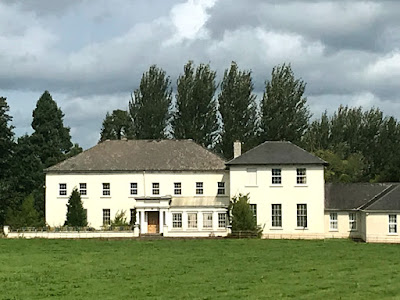 Ardagh House has survived changes of ownership and fires and is still standing after almost 300 years (Photograph: Patrick Comerford, 2018)